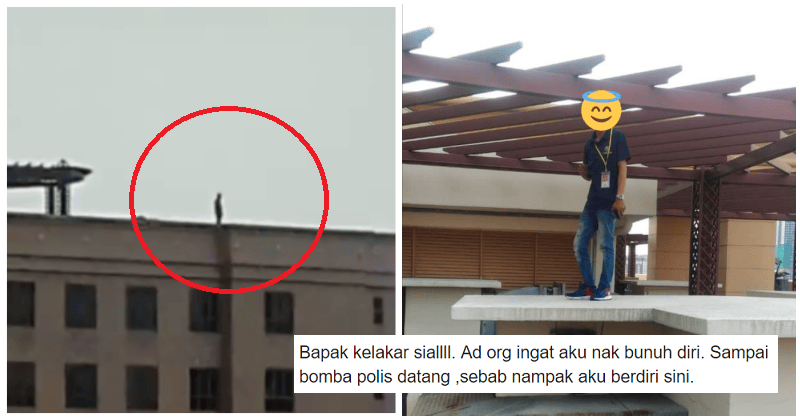 After the recent suicide of the girl who polled her life on Instagram, it’s only fair that netizens are on high alert for suicidal tendencies and signs in their surroundings. However, sometimes signs can be misinterpreted, which was the rather hilarious case for this hotel technician who was doing his job.

Asyraf Bin Azlin (@acapgiga) shared the ordeal in a Twitter thread, explaining how someone from a neighbouring building had noticed him on the roof of a building and thought that he was going to jump in a now viral video.

“This is ridiculously funny. Someone thought I was trying to kill myself. Until the fire department and police came, because someone saw me standing on the roof. But I am so far from the ledge. The distance of the platform was about 20 feet. It’s just that the platform is the same level as the ledge. For no reason, I’m now stuck at the police station,” Asyraf stated.

“My intentions of breaking my fast at home have been cancelled. Had to tell my mum I couldn’t come back to break fast. Instead, I’m sitting at the station waiting for the firemen’s investigation,” Asyraf added as he was not allowed to leave the station until the fire department checked the entire building for a dead body and take the manager’s statement.

“My boss got so worried thinking I really wanted to kill myself. He called me asking me if I was okay, telling me not to kill myself. And there I was, at the police station, scared but at the same time trying not to laugh when he said that.”

Asyraf’s family, friends and colleagues sent him their words of encouragement, joking with him and teasing him, which helped him pass the time while waiting for the police to release him. 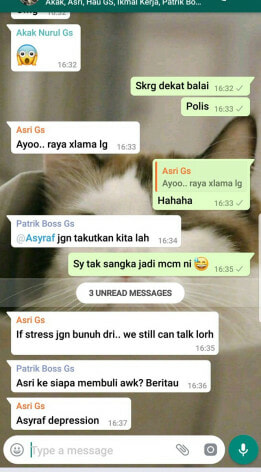 “I’m truly sad as my name and face have been scratched up. I got scolded and had to answer to the authorities. Even my company has been in the receiving end of the backlash. I’m also worried that action will be taken against me.”

Based on an intuition, Asyraf decided to dig a little deeper into the incident and discovered an interesting twist.

“The thing is, there was a cleaner on the roof as well, washing the floors over on the other side. At the opposite end. From what I remember, I sat and lied down a lot but stood only for a quick while. After I carefully watched the video, I feel like something isn’t right. I’m not satisfied. It feels like it wasn’t me.”

Taking investigative measures into his own hands, he concluded that it was truly not him in the video that caused him so much inconvenience.

Posting an image showcasing the position he was standing in and the obvious absence of a protrusion in the building (which can be very visibly seen in the video), he shared his disbelief.

“Not the same as in the video. No protrusion. So I’m very, very sure it wasn’t me. Should I report this to the authorities? If there were a body they would have found it right? No full video. I hope it was just the cleaner that was washing the floors.”

It’s a good thing that Malaysians are supporting each other in the journey towards reducing deaths by suicide, but we should be careful about what we share and say as it could have unintended consequences. Asyraf’s post has since garnered over 21,700 retweets.

Also read: MCMC: Those Who Voted for 16yo’s Suicide in Instagram Poll Could be Jailed for 20 Years 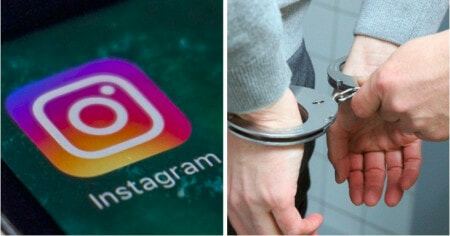