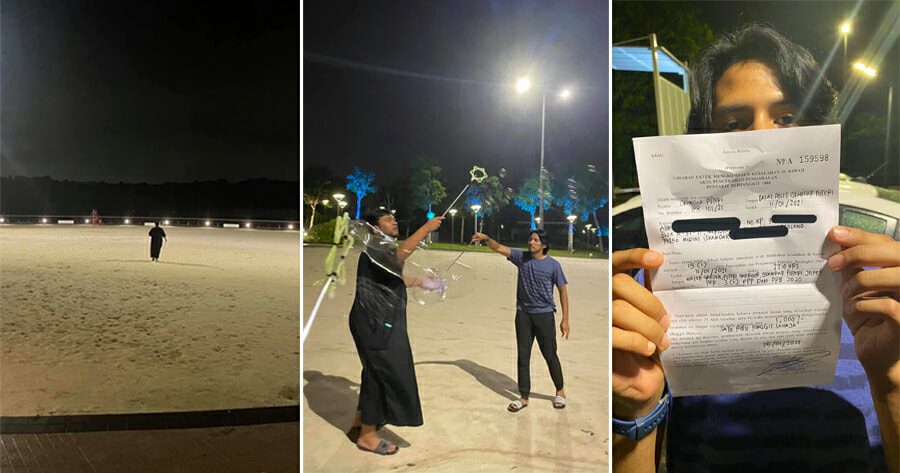 Two men from Johor were fined RM1,000 each for taking off their masks while playing bubbles in a spacious public area with NO crowd around.

Unsatisfied with the sentence, Wafi Shaik has since made a Facebook post to express his frustration about the incident as he recalls that Defence Minister Datuk Seri Ismail Sabri Yaakob had clearly said wearing masks are only compulsory in crowded areas.

In his post, he said that two days before the Movement Control Order (MCO) was implemented, he and two of his housemates planned to go to Puteri Harbour, Johor as they had been home for a long time and wanted to get some fresh air. 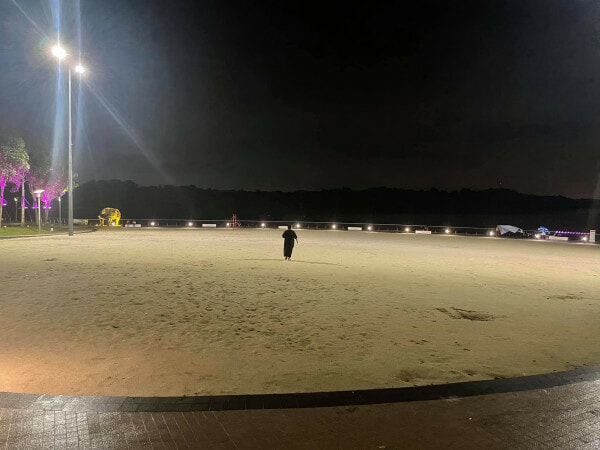 In a non-crowded area

Upon arriving at the location, the atmosphere was calm and relaxed. He could count how many people were there but he and his friends still kept their masks on. He then noticed that there were a husband and wife selling some bubble toys in the area and felt sad that no one was buying anything from them. He then approached them and bought some of the toys.

Looking around, Wafi noticed that there were less than 10 people in the area. He and his friends went to a corner where no one was passing by and began playing with the bubbles.

Recalling Ismail Sabri saying that masks are not necessary for areas that are not crowded, the trio temporarily took off their masks as they had begun to sweat and felt uncomfortable from running around. Wafi said that two of his friends put their masks in their pockets while he just pulled his mask down to his neck. 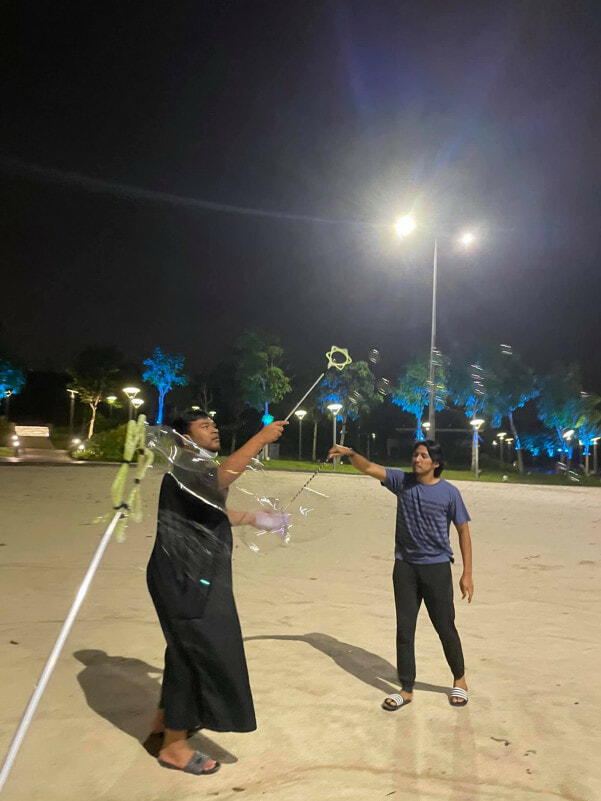 “We kept playing and taking pictures. When will we get this kind of opportunity again as we would be locking ourselves up at home during the MCO?” he said.

SOP on TV is different from the rules at the station

“Suddenly, someone with a collared shirt approached us and showed us a police identity card as evidence and continued without warning saying, ‘Both of you (except me) are fined RM1,000 each for not wearing a mask’.”

“Wahh so easily can fine people. Does he think that RM1,000 is RM10? Looking around, there’s no crowd around and only the three of us are playing. We think this is unfair.”

Wafi added that what annoyed him the most was that when they explained to the officer about Ismail Sabri’s announcement, the officer told them that “the SOP on the TV is different from the rules at the station” and that the police are following the rules from the station.

“Wahhh there are other rules? Why didn’t he explain or give a warning first? The thing is, we made sure we followed the SOP. It is us, ordinary people, who follow the government’s orders, but now everything is in vain?” Wafi said.

“Don’t you feel weird, having to follow rules that you’ve never heard of? Are all those viral posts on social media just a myth? What hurts, even more, is that the police didn’t explain or give a warning and immediately fined us RM1,000.” 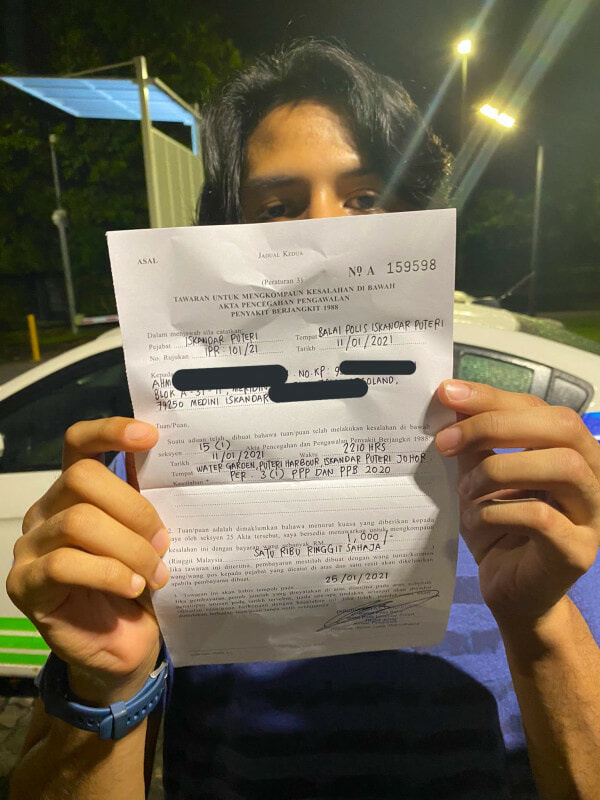 “Upon arriving at the police station, the tone of his voice was high and sounded like he wanted to fight with us,” Wafi said.

“After issuing the RM1,000 compound, he suddenly became like an angel, asking us where we lived, what we were doing, and treated us the opposite of how he did before.” 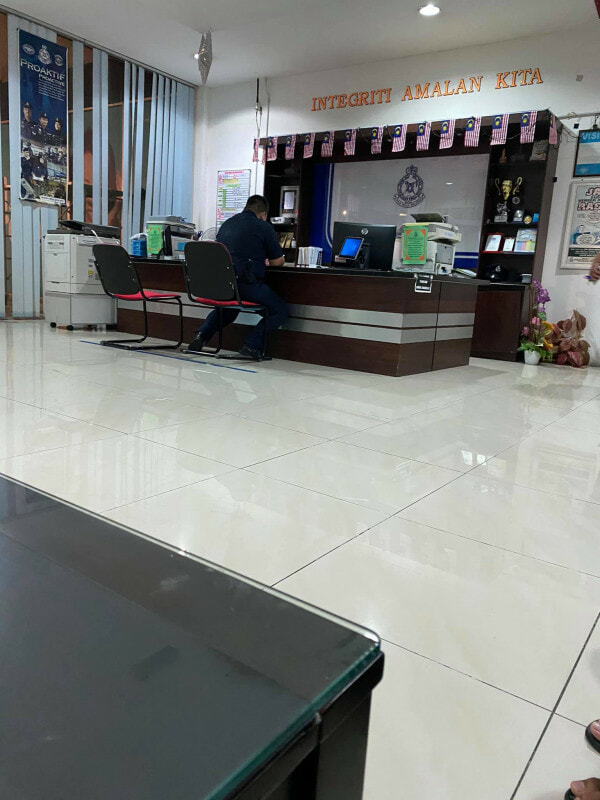 After more than two hours at the station, Wafi and his friends finally reached home at 1.30am feeling angry, disappointed and stressed about the RM1,000 compound fee.

Wafi then expressed that he feels very angry about how ordinary citizens like them have been treated unfairly and felt that many are facing the same situation.

“To the police, do you compound people just as you like? Don’t you give a warning first?” Wafi questioned.

“If you are angry that ordinary citizens argue with facts and then you label us as disrespectful to the police, we have the right to ask, why is it so hard to cooperate?”

“I also want to address the government. Make the SOPs systematic, firm and easy to understand. The ones who are compounded are the rakyat. Those who are sick during the MCO are the rakyat too.”

“But the government? Only busy saving their own position. The SOP for the rakyat is different from the SOP for those in high positions. Double standard.”

Wafi then ends his post by expressing his disappointment with the situation and how many citizens have to suffer during the MCO.

“Only a few can face the MCO with laughter, the majority of people have to think about what’s going to happen tomorrow,” he said.

“The people’s financial emergency is worse than a political emergency that only cares about power. The longer this takes, the more people suffer.”

“I’m tired of this inhumanity.”

What are your thoughts on Wafi’s experience? Let us know in the comments below.

Also read: PDRM: Man Fined RM1,000 For Not Wearing Mask Under A Hut, Not In Front Of His Home 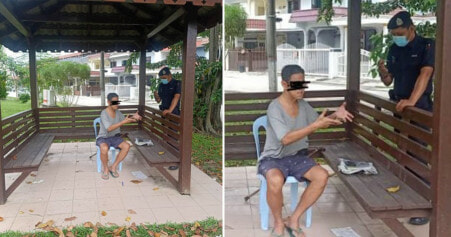