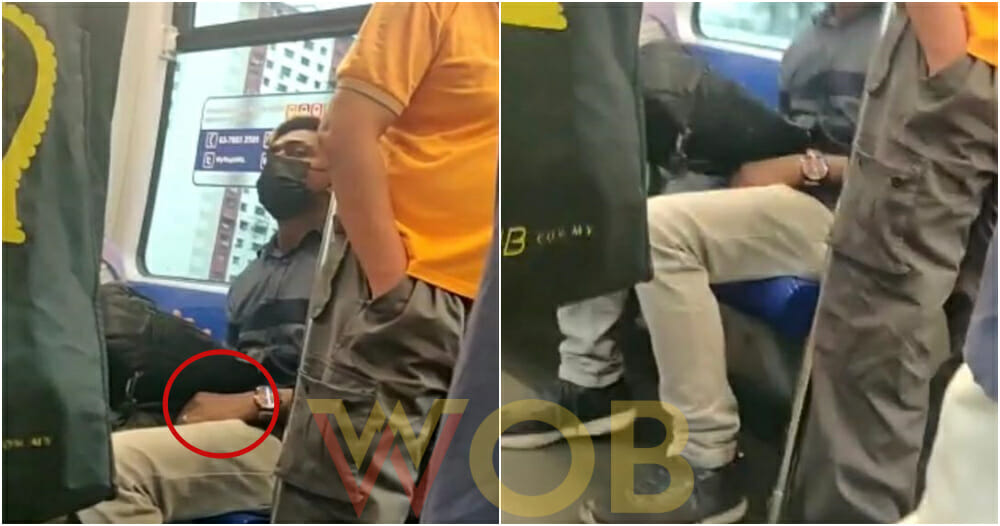 The incident which first happened on 4 April, was reported by an 18-year-old female passenger when she decided to take the public train home from Alam Megah to Taman Melati.

However, she noticed a man sitting in front of her was touching himself inappropriately while looking at her. She pulled out her phone to record the incident and caught him at the moment when he was ejaculating.

Video from the incident that happened on 4 April.

Police have been on the hunt for the suspect ever since the victim first made the report. Thankfully, it has just been confirmed that the suspect was caught in action again last night, according to another fellow passenger, Mesh.

“I caught him doing IT again”

Speaking to WORLD OF BUZZ, Mesh explained that he spotted the suspect yesterday, 25 April, when he was taking the public transport in the evening around 6.05-6.20pm via Kelana Jaya Line LRT (train number 284).

“When I entered KL ECO CITY/Midvalley LRT station (Abdullah Hukum KJ17) to Bangsar LRT Station (Bangsar KJ16) he was already inside the train before the stop,” Mesh told WORLD OF BUZZ.

“You can see in the video, he is still playing with his ‘thing’,” Mesh said, referring to the video that he shared with WORLD OF BUZZ.

“After reaching out to RapidKL’s security team, I managed to send them the video I took as well as providing them with the necessary information.  After 3 hours, they managed to track the suspect down through CCTV footage,” Mesh said.

A screenshot of Mesh’s conversation with Rapid KL’s security team.

“I think it’s God’s gift for me to be seeing this. Police have been trying to locate him daily in LRT station via Subang Jaya station for the last 3 weeks. Finally, he was arrested at USJ 7 KJ34 station.

He was doing a round trip from Point A to B and B to A based on Rapid KL map,” Mesh added.

WORLD OF BUZZ reached out to Rapid KL for confirmation in regards to the matter.

“We confirm that on 25 April 2021 around 8.15 pm, our Auxiliary Police’s Special Action Taskforce with the close co-operation and action by PDRM Cawangan Jenayah D11, apprehended a male passenger at LRT USJ 7 station. The passenger is the main suspect in the sexual harassment incident that took place aboard one of our trains on the Kelana Jaya LRT line on 4 April 2021.

We thank IPD Subang Jaya and PDRM Cawangan Jenayah D11 for their upmost professionalism and care in handling this case. We also thank our passengers and members of the media for bringing up such cases to our attention. We cannot stress enough the importance of speaking up in order for us to keep our trains safe and secure for all.”

She also took the opportunity to remind members of the public concerning these 3 steps if one were to ever encounter or witness sexual harassment incidents aboard their trains: 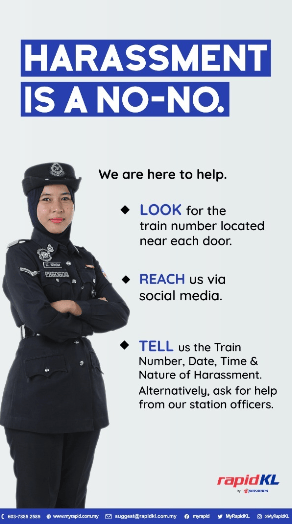 “If you encounter or witness sexual harassment incidents aboard any of our trains, please remember these 3 steps:

1. Take down the number of the train located near the exit doors.

2. Reach out to us through any of our social media channels, or see our Transit Officers or Auxiliary Police at the station immediately. 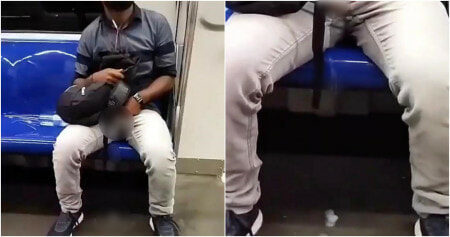