This is outrageous! A middle-aged man in Kelemak, Alor Gajah, Melaka was recently arrested for stealing multiple pieces of undergarments and it is believed that he has been doing this many times since November 2019. The police found that he had even used the underwear to dress up a pillow as if it were a sex doll.

According to Sinchew, the 51-year-old suspect was caught on CCTV sneaking into someone’s house to steal their undergarments. The police said that they received a report from a 31-year-old housewife who said that someone was stealing underwear from her home.

She said that around 7.40am on February 18th, she wanted to load up the laundry in the washing machine at the back of the house. She discovered that both her and her daughter’s underwear was missing so she decided to checked the CCTV footage.

The victim was shocked to see that a strange man had climbed up the house fence and broken into the back of her house. He went to the washing machine and ransacked it before he found the underwear and escaped. The police investigated and arrested the suspect at his home at around 9.30pm on the same day.

In the process, they seized over 40 pieces of stolen female undergarments from his house. There were at least 10 pieces of underwear and 30 bras belonging to other women. They were shocked to find that the pervert had dressed up a pillow in women’s underwear as if it were a sex doll. Based on initial investigations, the police discovered that the suspect was involved in a sodomy case before and he also had a history of burglary and intimidation. The suspect tested positive for drugs as well.

We really don’t want to know what he’s been doing with that pillow though! 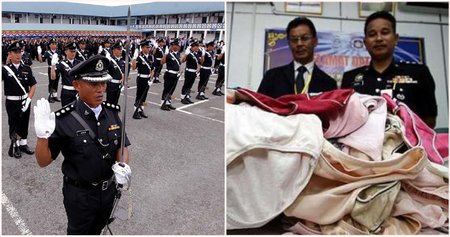