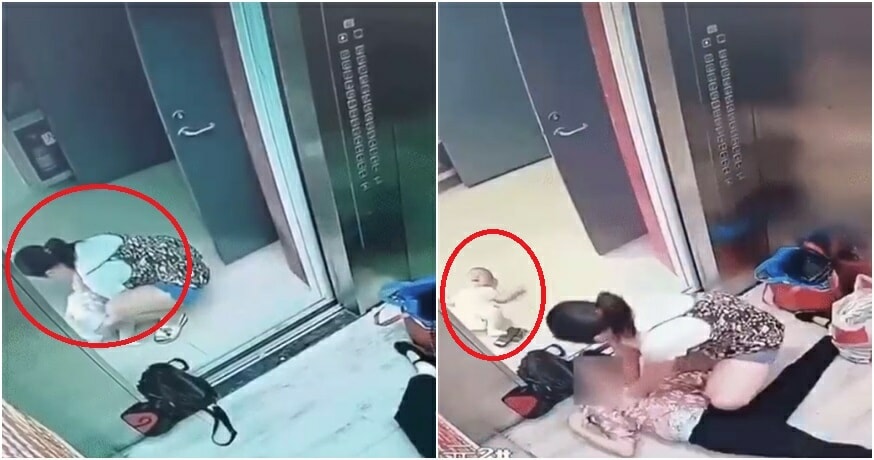 What would you do if you encountered a person suffering from the onset of a heart attack? Chances are for most of us, we would resort to calling for the emergency services immediately, given the fact that are are more likely than not, ill-equipped to offer any other means of aid.

But if you ask one courageous mother who witnessed an elderly woman suffering from a sudden heart attack, impulse had her settling her own infant child on the ground outside an elevator as she rushed in to attempt to save the elderly woman from a fatal heart attack.

The incident, which reportedly took place in China’s Shaanxi Province, saw the young woman carefully and calmly setting her own baby on the ground outside an ajar elevator, before moving in to administer chest compressions to an elderly woman who had fainted from the onset of what was said to have been a heart attack.

"I was a nurse before becoming a mother”

Surveillance camera captured the touching moment when a woman put her child on the floor to help an elderly lady undergoing a heart attack in NW #China's Shaanxi Province. #ChinaBuzz pic.twitter.com/VnR2Kvh4IV

As it turns out, the young woman was in actual fact a trained nurse according to Chinese media network CGTN, and her life-saving instincts immediately kicked-in when she saw the elderly woman in obvious distress.

“I was a nurse before becoming a mother,” she said.

However, it was later revealed that the elderly woman had unfortunately passed away when emergency services arrived at the scene and found that she had no vital signs.

The video, which has since gone viral across social media, has garnered the young woman plenty of praise for her composure and quick thinking, especially after having gone to the extent of leaving her own baby aside to save the life of a complete stranger.

We commend the young nurse for her courage, and extend our deepest condolences to the family of the deceased elderly woman.

Also read: M’sians Heartwarmingly Come Together to Save Foreigner Who Fainted & Collapsed in Kopitiam