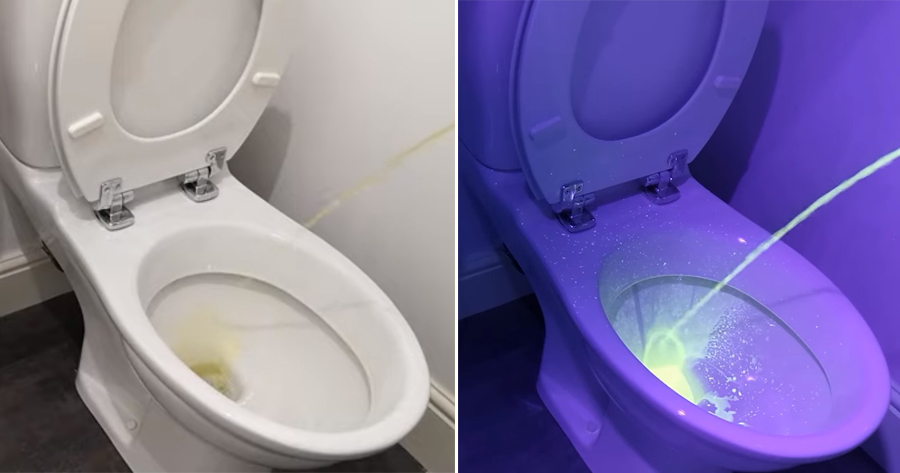 69% of men prefer standing when they pee instead of sitting as it’s faster and more convenient, and out of that percentage, two-thirds say that they always try to reduce splashback by “aiming their stream at the optimal part of the toilet bowl”, which seems to be the back wall of the bowl.

Additionally, six out of 10 men have admitted that they sometimes go ‘hands-free’ when they pee and only use their hips to aim. Half have even challenged themselves to see how far back they can walk while “staying on target”, and four out of 10 men pee with the toilet seat down.

These ‘statistics’ comes from a video by QS supplies that intends to reveal how much splashback is actually created when men pee while standing by using ultraviolet (UV) light and fluorescent fluid.

The video then shows an ordinary white toilet bowl in normal lighting with an unidentified person releasing his yellow stream of pee into the bowl. He can be seen aiming his pee at the back wall of the bowl which does not seem to be making much of a splash. 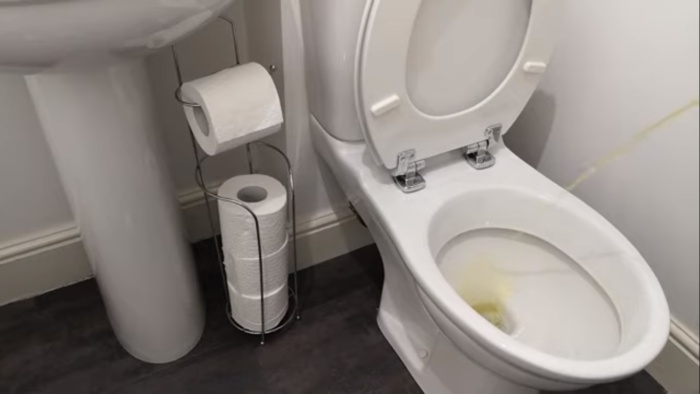 However, the toilet lights are then turned off with the UV light being shone into the bowl, and immediately neon yellow droplets are seen splashing all over the toilet bowl, with some even splashing onto the rim of the bowl and onto the underside of the toilet seat. Some of the pee droplets had even reached the wall, which is about 36cm away. 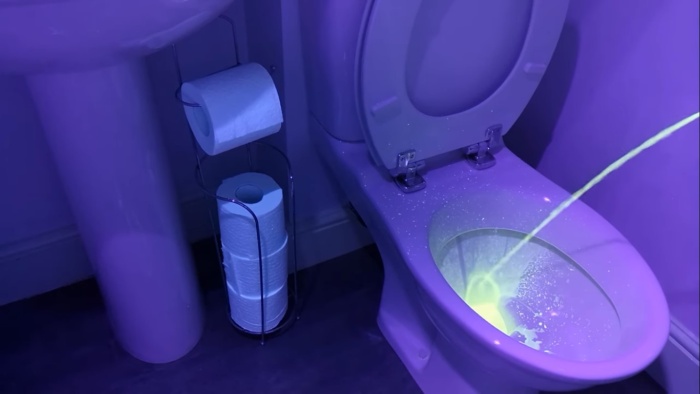 The video then goes on to show that they tried dozens of aiming variations to see if they could reduce or prevent the unseen splashes before explaining what they had learned from the ‘study’.

29% of men often aim directly into the water which “produced large droplets that mostly stayed within the bowl, with minimal spray onto the rear rim of the bowl, underside of the toilet seat and lid, and nearby wall,” it said.

Only 2% usually aim at the nearside of the bowl, in front of the water, which produced the least splashback. This made the pee flow over and around the bowl instead of bouncing off it.

The test revealed that 31% of men aim at the back wall of the bowl, which makes it the most common surface for attempting to reduce splashback. Although large visible splashes are reduced, peeing on the back wall actually produces more unseen misting and spray than the other surfaces. 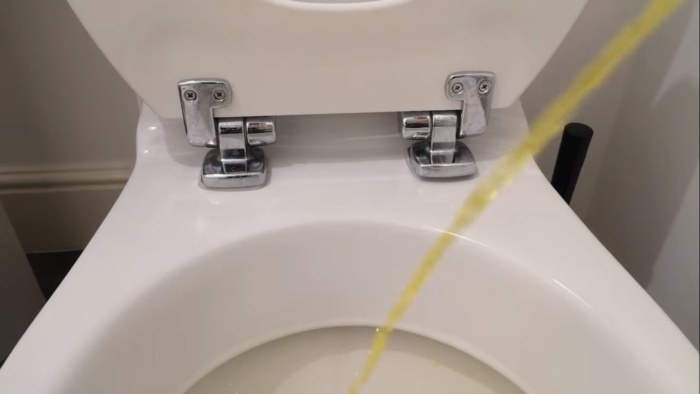 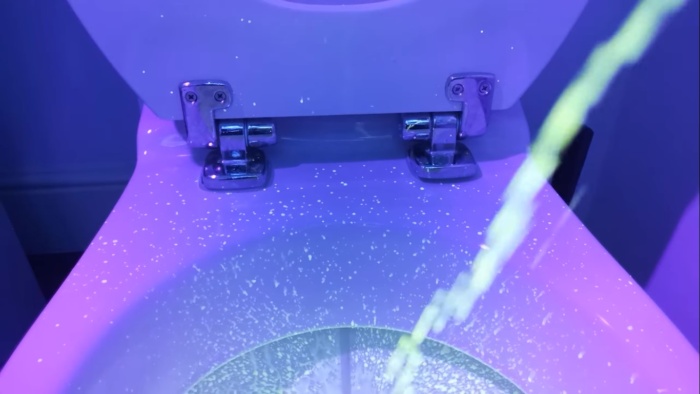 Thus, when one-third of men aim at the back wall of the bowl in an attempt to reduce splashing, they may actually be creating more splash than they intend to.

The video then shows how much unseen splashback happens just from two standing urinations per day, accumulated across a five-day period between cleans. This means 10 urinations in total.

The end results show the same toilet bowl under the UV light on the fifth day covered in countless pee droplets all over the rim, with some even reaching the toilet paper and sink area. 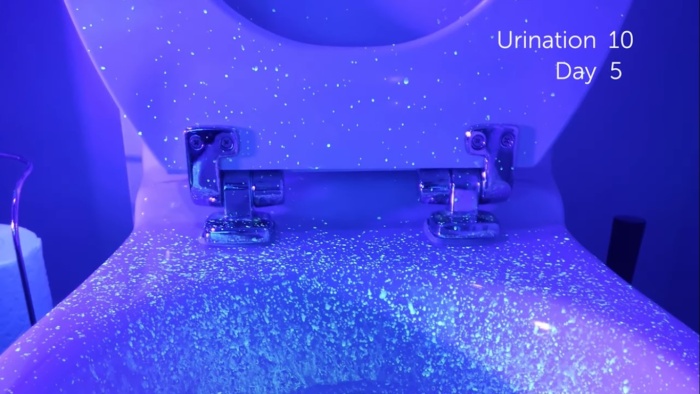 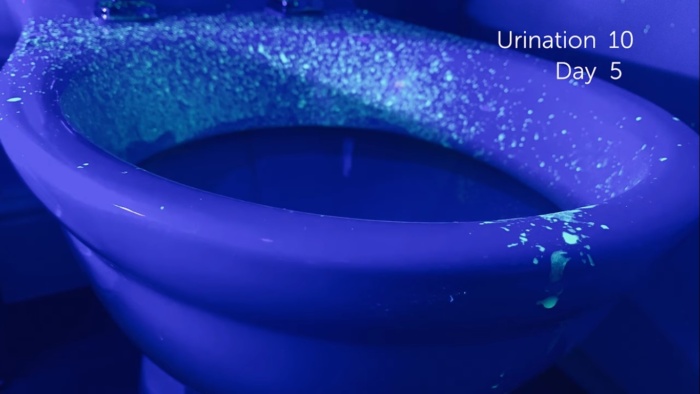 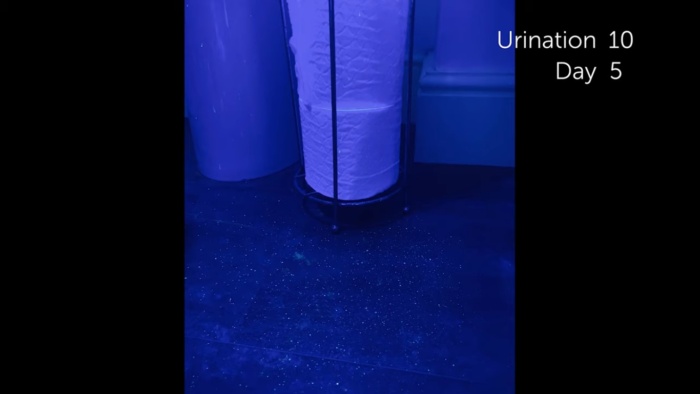 So guys, I guess you know what to do if you care about reducing splashback when you pee. Try to aim at the front wall of the bowl instead of the back wall. Or…you could just sit and pee. Either way, make sure to wash your toilet bowl frequently! 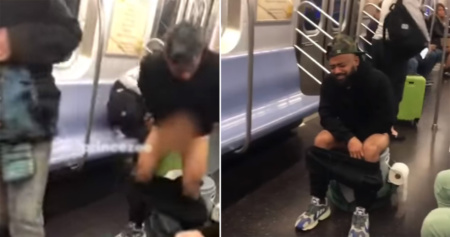