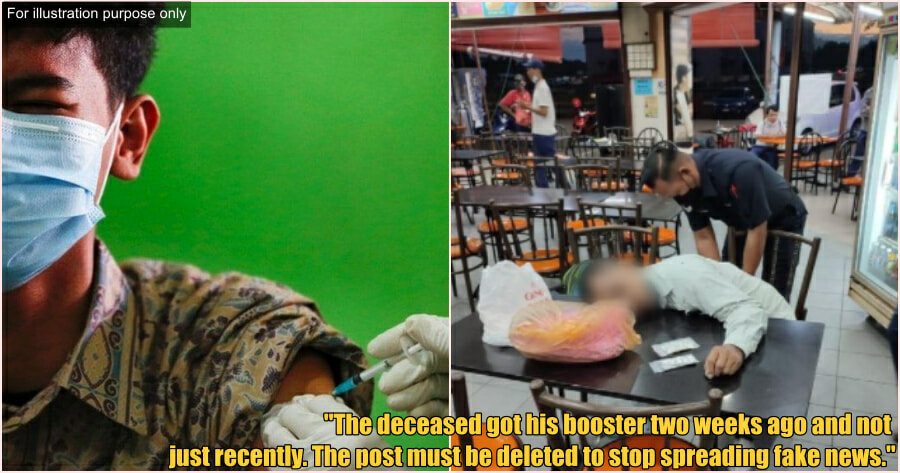 As more Malaysians are now getting their booster shots, antivaxxers have increased the amount of fake news that they spread.

Many have even resorted to paying huge amounts of money to alter their MySejahtera vaccination status.

A Facebook post of an unconscious man at a mamak recently garnered plenty of attention after an antivaxxer had claimed that the man had passed away due to his booster shot.

The post reads, “There is a man who has passed away at Restoran Salam Sentosa, Bukit Sentosa, Rawang whilst having breakfast. Apparently he has heart disease and just had his booster shot.” 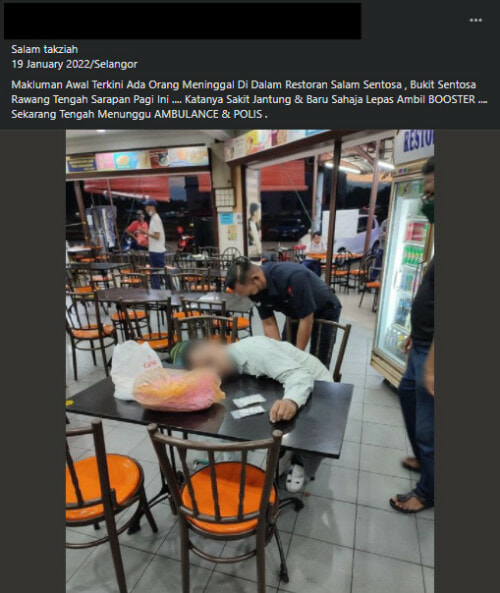 The post had unfortunately attracted the attention of other antivaxxers who expressed their beliefs in the comments section.

One user said, “How many more of the rakyat will have to be lab rats.”

“That’s scary… say no to booster,” said another antivaxxer.

Another said, “I think the purpose of the vaccine is to cut down on the number of human beings.”

Relatives of the deceased cleared things up

A man claiming to be a cousin of the deceased went on to comment on the post. “The deceased has a history of heart disease and was waiting for a hospital appointment for an upcoming procedure.”

“No correlation to the vaccine or booster. I hope that the admin will delete this post and respect the family and the deceased,” he added. 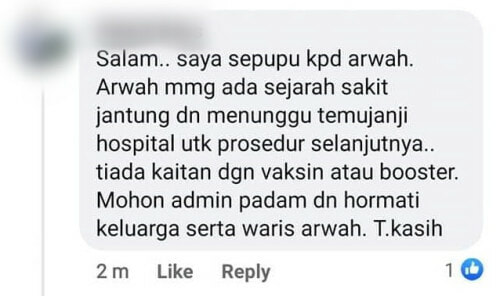 Another person claimed that the deceased was the father of a friend and urged the poster not to spread fake news. “I recently went to the house of the deceased whose family told me to remind people that this post is fake.”

“The deceased got his booster two weeks ago and not just recently. I ask for the owner of the account to delete this post and to stop spreading fake news.”

“The deceased had issues with his heart and died due to a heart attack,” explained the user. 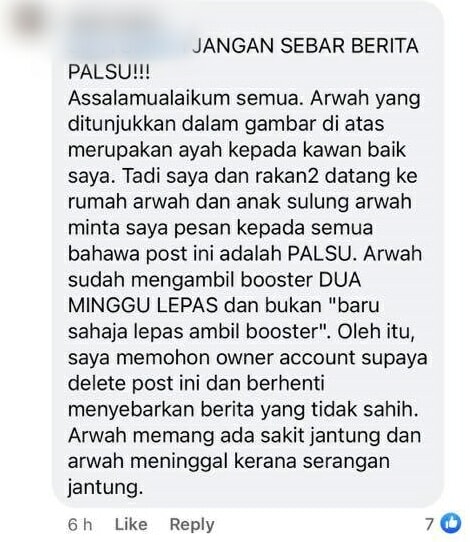 The issue even caught the attention of the police, who have issued a statement in regards to the issue.

In the statement issued by the Hulu Selangor Police district, they announced that the police were alerted to the incident on 19 January at 7:00am.

“The 54-year-old Malay man works at a national factory. He suddenly fainted at the restaurant and when medical authorities checked on him, he had already passed away.”

“His wife stated that the deceased has issues with his heart and has been having high blood pressure for the past 5 years,” said the statement.

They also urged the public not to spread speculation in regards to his death on social media.

Do you think that antivaxxers should be punished for spreading fake news? Let us know in the comments.

Also read: Antivaxxer Mum Plans to Sue KKM & Her Husband After He Got Their Son Vaccinated Without Her Consent 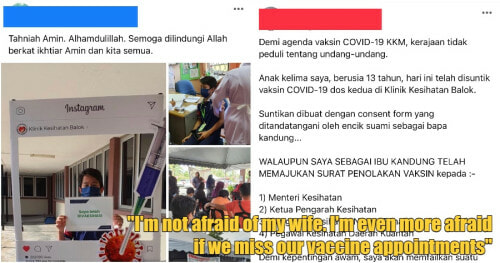