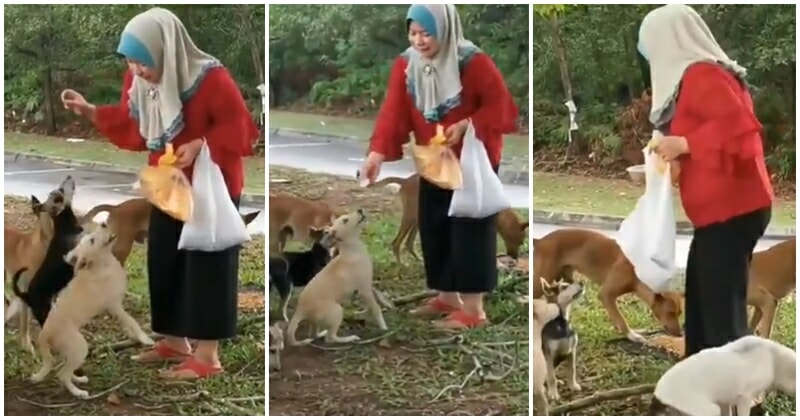 In a world where animal cruelty is getting much attention these days, it simply warms our hearts to see that there are still those out there who continue to restore faith in humanity.

A video of a Malay lady feeding a pack of stray dogs, despite the fact that it is haram for Muslims to touch them, caught the attention of netizen Clement Wong, who recorded the lady’s noble act.

The video then came to the attention of comedian Harith Iskander, and the funny man tweeted his awe of the lady’s actions.

He writes, “While some are petrified over protests, perceived loss of dignity, there’s this woman who lives her life with kindness and compassion.”

“May Allah bless this lady and may her actions be made an example to us all.”

In the 30-second video, the lady in red was seen emptying the contents of her bag to a waiting pack of stray dogs, before being ‘caught in the act’ by Clement Wong.

In the video, Clement was seemingly astonished at the act, saying “This is a first for me” and asking the lady “Aren’t you afraid of the dogs?”

Though much of the conversation can’t be heard, it is the lady’s actions that mattered most.

The video has garnered more than 154k views and 6,797 retweets, and is surely the best representation of how best to treat other living beings on this earth.

Surely all of us would like to see more of this in the future, right?

Also read: 60yo M’sian Uncle Feeds Stray Dogs Even Though He Barely Has Enough Money To Feed Himself 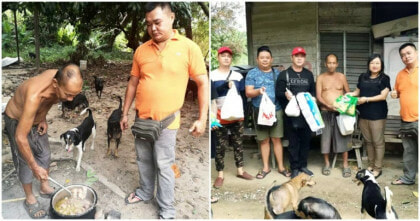