This Malaysian boy is living proof that with hard work, dedication and appreciation for your roots, success is almost inevitable.

Mohammad Afiq Ismail, who used to be a shepherd boy back in his home town in Kelantan, just graduated with first-class honours from the University of Essex, United Kingdom in Accounting and Finance. And being the humble person that he is, he acknowledged his mother’s prayers, his relationship with Allah and good friends as the reasons behind his success.

His story was shared by Khairul Aiman Hamdan in a now viral Facebook posting, who described Mohammad Afiq as a living legend considering how far he’s come and what he’s accomplished.

Khairul captioned the posting with, “This is a story about a boy who took care of goats, that flew to England.”

“This Public Service Department (JPA) scholar has a story so unique, I had to share it. The child of Ismail bin Abas and Norma binti Abdullah, he’s a normal boy, raised in a normal village, who helped his father with their palm oil farm and goats as livestock. His mother was a housewife who would sometimes do part-time jobs selling cloth in the village.”

Afiq only had one brother, who was differently-abled, and hence could not contribute to their daily routines. Afiq’s father, who believed that he could turn their family’s fate around, sent Afiq to a private boarding school while working all kinds of odd jobs to afford their monthly fees of RM300. Unfortunately, he was forced to leave the school due to his PMR results not being up to the school’s standards.

“I moved to another school where I got into the accounts class. From there I realised my interested in numbers. When I got 9As on my SPM trials, everyone looked at me. I did not look back. By the grace of God, I got 10As and a B for my SPM.”

Afiq’s father had slaughtered a cow and a goat for the whole village to feast on after hearing that his son had been offered to further his studies at the University of Essex because of his SPM results, a feat no other villager there has achieved so far.

However, life was not easy for Afiq in the UK as he worked part-time as a cleaner at the university in order to save money to buy flight tickets for his parents to attend his graduation.

Afiq continued, “My mother and father have never been on an airplane. I wanted to pay for their tickets as a gift for everything they’ve done for me, for helping me finish my studies. My whole life, I’ve only wanted to give them the best. Not just a degree, but the valuable experience of watching their kid receiving the degree. I knew I wanted to be with my parents during that time.”

From taking care of goats, growing palm oil and driving lorries to holding one of the most highly sought after degrees in the world, he did it all to make his parents proud, as appreciation for all they’ve done for him.

Khairul’s posting has since garnered over 630 shares.

Afiq’s biggest lesson for us is that it doesn’t matter what background you carry. To reach your goals, it’s all about hard work, dedication, appreciation for what you have and most importantly, staying humble.

Also read: Meet The M’sian Man Making An Effort To Teach The Bajau Laut Children, All On His Own Dime 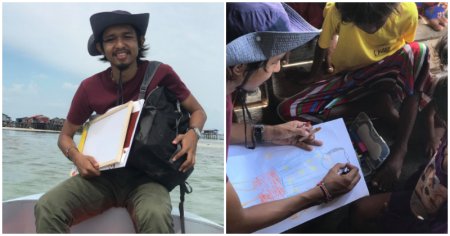