Well, this certainly looks like an awkward situation for this man! A man identified only as DS was arrested last Sunday (Sept 30) as the Jakarta Metro Police discovered that his house was used in an alleged gay sex and drugs party in Sunter Agung, North Jakarta.

According to Sinar Harian, the party was busted when some people reported it to the police and following the tipoff, the cops raided the house at around 1.30am and found 23 men inside the house. Central Jakarta Deputy Chief of Police Arie Ardian Rishadi said that along with the men, they found dozens of ecstasy pills at the premise.

“The house that was used for the wild party belongs to DS. It is believed that DS has a wife and when the raid happened, his wife was working outstation. Most of the men who were arrested actually knew each other through social media,” he added.

Arie said that the police suspected that it was a gay sex party because, during the raid, all the men who were in the house were only clad in their underwear. Detik reported that the partygoers said that it was the first time they held this kind of party in Sunter as they usually did it overseas. The party was also known as the North Fest Club.

While homosexuality is not a crime in Indonesia other than in Aceh, the police are currently investigating the origins of the illegal drugs and whether there was any element of prostitution as well. If found guilty, the partygoers could face up to six years jail for possession and up to 20 years if they were found to be involved in drug dealing.

Looks like the owner of the house has got a lot of explaining to do to his wife! 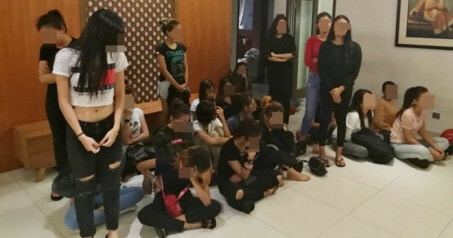