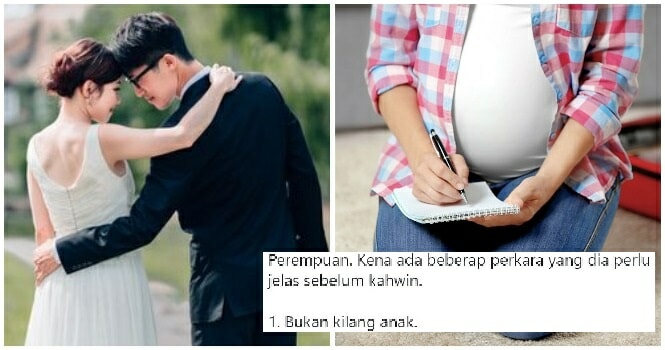 They say that marriage is a huge step in life.

A Twitter user known as @aensaari shared a tweet about a list of things for women to pay attention to and be clear about before marriage. It’s a pretty woke list. It seems like a lot of people are able to relate to the tweet because it garnered about 32K retweets and 22.6K likes in less than 24 hours. 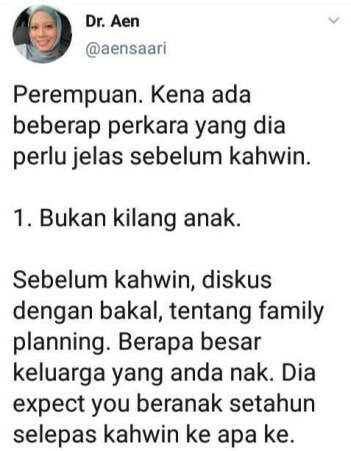 Aen shared that before marriage, women should discuss with their future husband about family planning.

The couple should talk about how many kids they want and when the husband expects to have a kid, whether it’s a year after marriage or etc.

She said that some women might be too caught up with the wedded bliss that they agree immediately to have babies. It’s important to note that pregnancy is no easy feat and women should be prepared for the whole experience.

“No matter how much you love your husband, it’s you that has to bear the pain,” Aen wrote. 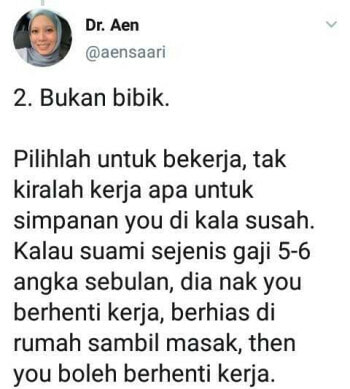 In her tweet, she encourages women to choose to work. She said that any work can help with financial savings and it will be especially helpful during difficult situations.

“If your husband earns a five-to-six-figure salary and he wants you to stop working, stay pretty and cook at home, then you could definitely consider that,” Aen tweeted.

If the husband has financial struggles in the middle of the month, at least the wife’s income could help reduce the burden. Husband and wife should work together to manage the family.

Aen said that it’s unfair to expect only one person to provide for the whole family. She encourages the husband and wife to give and take.

She also reminded women that before marrying, they should make sure that their future husband is able to compromise.

3. “Your world does not revolve around your husband entirely.” 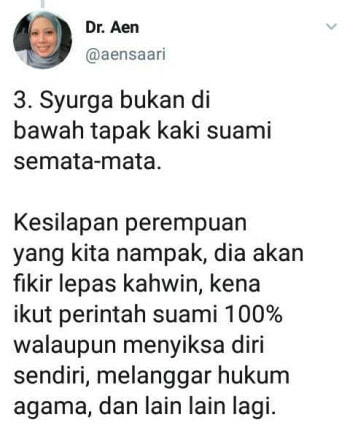 Aen wrote that one of the most common mistakes some women make is that after marriage, they think that they have to follow their husband’s wishes 100%, even if it means putting themselves through a lot of trouble, going against their religion and more.

Her point is especially relevant in cases where there is physical and mental abuse. Some wives can’t break out of the relationship because of a “sense of attachment”.

Aen urges women to check for the red flags in their future husbands’ behaviour before getting into marriage. In Aen’s words, “Better be safe than sorry.” 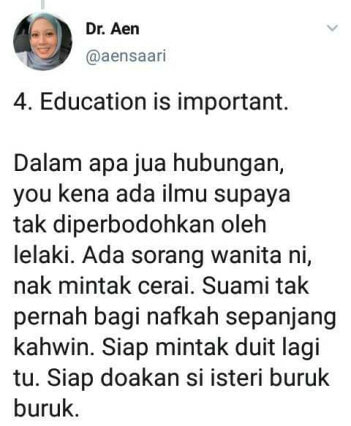 Yasss, gurl. You got that right!

“In relationships, you should have education and knowledge so that you are not easily deceived by some men,” Aen wrote.

She said that there was a case where a woman wanted to get divorced from her husband because he didn’t provide income all the while they were married.

He even asked the wife for money. So when she wanted a divorce, he used his knowledge in law to blackmail the wife about their joint property.

The woman continued staying in the relationship because she was scared of losing her only owned house to her husband.

The situation would not have happened if the woman was more aware or if she asked someone who is knowledgeable in the field of joint property. 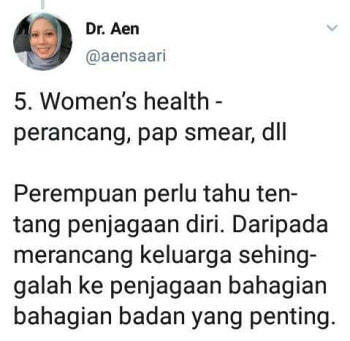 Aen advocates women to get themselves medically examined, from family planning to taking care of themselves.

“Don’t be too busy looking after your husband that you forget to look after yourself,” Aen shared.

“Don’t have the misconception that contraceptives cause women to be infertile. It’s a mistaken belief,” she added.

She encourages women to think about getting a pap smear too.

It’s awesome when someone voices out the concerns that most women want to ask, but may not feel comfortable voicing out. Of course, there may be some people who disagree with certain things that Aen said in the tweet, but we can always take the good points shared to heart. 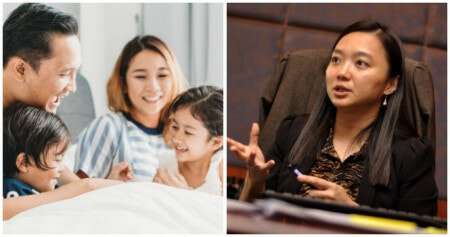