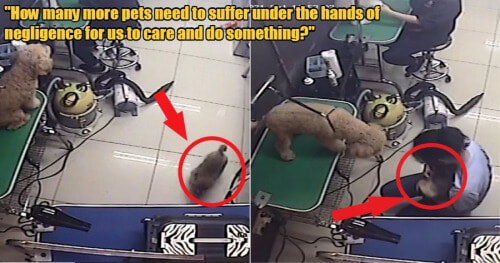 Just about a month ago, a poor little dog hung to its death at a Petsmore in Kota Damansara.

Now, another Petsmore branch is receiving backlash after a little doggie was severely injured, allegedly in the hands of a staff member.

Nicholas Wolv took to his Facebook profile to share how his dog, Pax, had ended up with a dislocated femur bone after being sent for a dental treatment at Petsmore Setapak Central.

He wrote, “On 20 November (Saturday), my mum and I sent our pet, Pax, for dental treatment at Petsmore Setapak Central at 10.45am, with a fixed appointment. The cashier carried Pax and gave him to the groomer. We saw the groomer place him on a table, strapped and ready for treatment.” 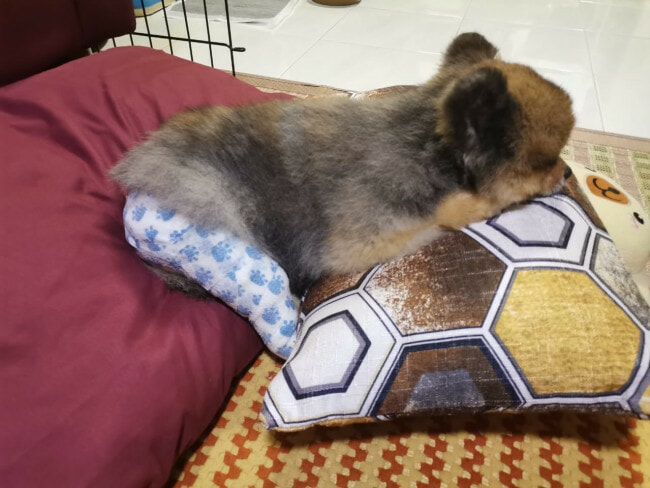 They then decided to wait around in the shopping complex until Pax’s treatment was complete and had told the cashier to call them if they needed anything in regards to Pax.

“Later on, we went back to Petsmore at 12.30pm, to wait there until he finished his treatment. Mum and I found out that Pax was screaming but yet the groomer was continuing with the treatment. After Pax was done with his treatment, the cashier handed Pax over to us while he was still screaming,”

“My mum questioned the groomer and the cashier on if Pax had fallen. We found out he was actually screaming in pain, but the source of the pain was still unknown until we put him on the ground in the grooming room. Pax was running around while limping and screaming near my mum and me, and it appeared that something had inflicted a great amount of fear in Pax,” he explained. 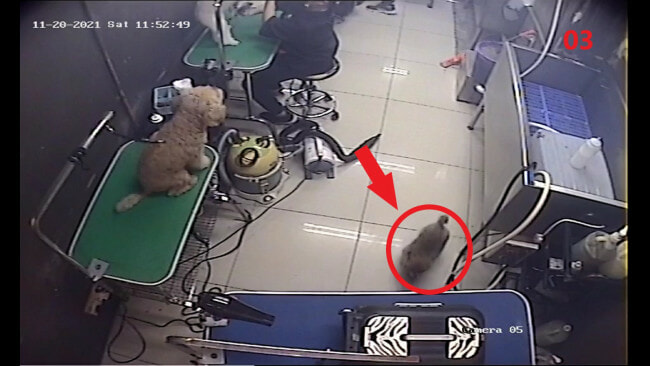 After questioning the groomer and cashier, both staff members insisted Pax had patellar dislocation. The cashier had even said that the groomer possessed ‘little knowledge about dogs’.

“However, in the countless days of check-up appointments in the many vet clinics and hospitals in the past, Pax’s doctors never mentioned anything about Pax having patellar dislocation,”

“We rushed him to PetVet Asia at around 4pm. They said that he had recently dislocated a femur bone on his right hind leg. Specifically speaking, his femoral head is out of the acetabulum (pelvic socket), which requires a great amount of force to achieve,” Nicholas added.

Due to the injury, Pax’s overall movement was compromised as the ligament that sits between the femur and the pelvic bone was completely ruptured. Determined to find out what really happened, they decided to get the help of the law.

“Then, we went to a police station at around 8.30pm to lodge a complaint against Petsmore in order to acquire the CCTV footage,”

“On 21 November, at 9am, Pax was brought to the hospital for his procedure. His procedure was completed at 11.15am, whereby the vet tried to move the bone back into the socket and, according to the vet, it couldn’t go in completely due to a severed ligament. The vet said hopefully the new tissue will form around the bone, which will help hold the joints tightly. If this doesn’t work, Pax will have to undergo major surgery,” he explained.

Later that night, the Petsmore cashier had called to inquire about Pax, and share information he had gathered on the incident.

“The cashier explained that the groomer found out that Pax has some complications with his hip bone during his treatment and tried to fix it. Sadly, they refused to admit the truthful reason for Pax’s bone dislocation.” On 22 November, at around 2pm, they headed to Petsmore to obtain the CCTV footage.

“Despite holding a police report, the Petsmore staff refused to give the footage to my mum. So, we went to the police station to get a police officer to escort us. At this time, a lady, who is the operational manager, still refused to hand over the footage, but the officer told them they had no choice,”

“The CCTV footage showed that Pax had appeared in a flash at 11:51:09am on the floor, then we saw him hiding underneath one of the big basins. Then, Pax can be seen running in angst to other surrounding places. Later on, it appeared that the groomer caught him from a corner where plugs and wires can be seen, dragged him out and immediately put him on her lap then tried ‘fixing his bone’,” Nicholas said. 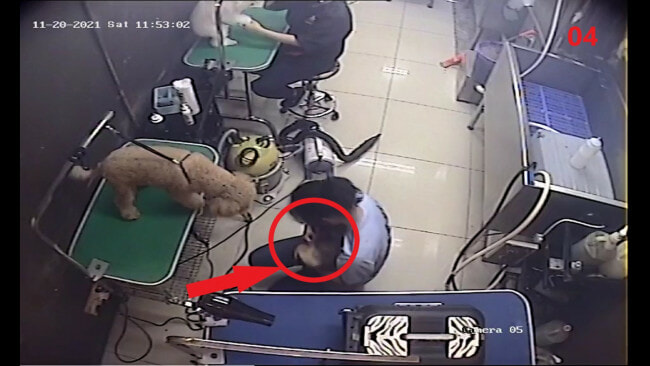 The groomer then carried Pax to one of the basins.

“That was when we arrived at 12.30pm at the centre to find the groomer continuing with Pax’s treatment while he was screaming in agony.” 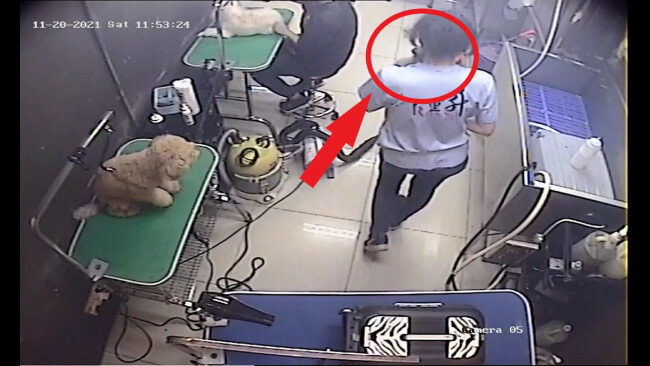 After viewing the clip, they decided they needed other angles of the footage and headed over to the Petsmore branch.

“When she arrived with my brother at the centre, she was approached by the Division Head of Petsmore. My mum was convinced by him to settle this fast and the medical bill for Pax would be paid by them. He also insisted that he follow us to the vet on Friday for his follow-up check-up with the veterinarian,”

“My mum refused and said she would handle it and inform them later. Upon my mum’s refusal on accepting their help of payment for Pax’s medical bills, he then gave his name card to my mum to contact him for ‘anything’,” he explained.

They have since been taking care of their little dog and hoping for a speedy recovery. Though the poor dog has also had to endure bleeding during his bowel movements, more bad news soon came. 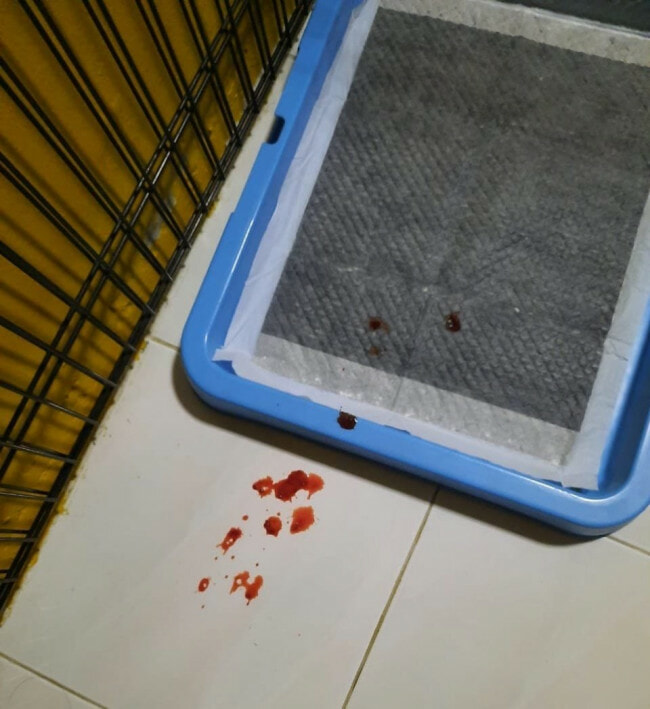 During an examination of Pax’s leg, the veterinarian revealed that his femur bone was once again out of the joint and that his condition had reverted back to how it was from the start.

“Due to that, our poor beloved furball won’t be able to walk or run in a normal condition. Furthermore, the doctor also suggested that Pax undergo major surgery where they will remove the head of the femur bone to reduce his agony upon movement. We had no choice but to agree to this surgery for his betterment, despite the risk since Pax is only a tiny dog,”

“The incident has been hard to deal with since then. Pax will need to live with a lot of complications, and Petsmore has, rather than show any remorse or empathy, been trying to sweep this under the rug and attempt to settle everything with money,” Nicholas shared.

Nicholas hopes that his post will reach the authorities so that the appropriate action will be taken.

“How many more pets need to suffer under the hands of negligence for us to care and do something?”

Petsmore Malaysia has since shared a statement, denying the claims that the injuries were caused by their staff member. 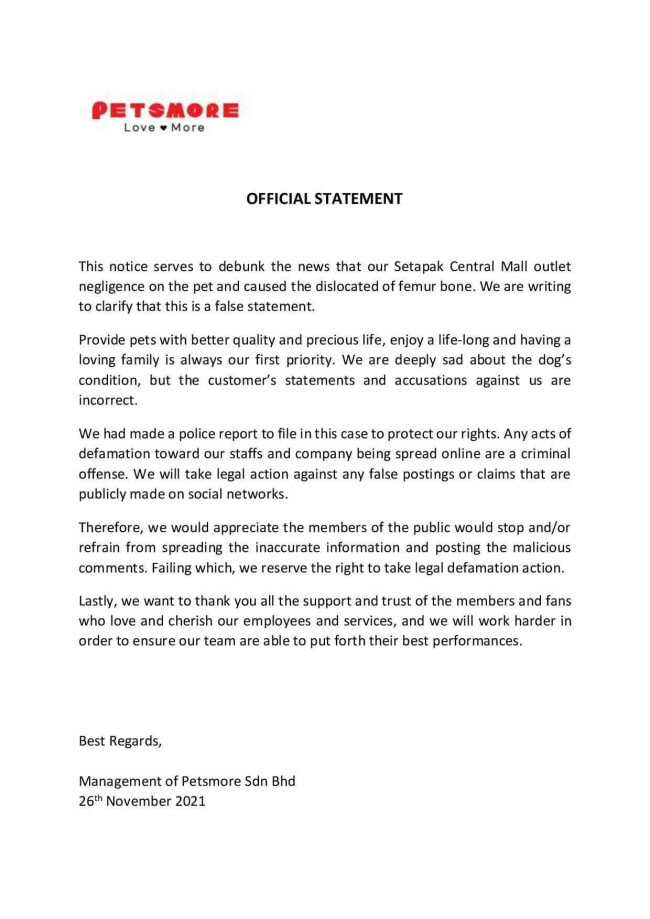 They wrote, “We are writing to clarify that this is a false statement.”

“We are deeply sad about the dog’s condition, but the customer’s statements and accusations against us are incorrect.”

Also read: M’sian Shares How Good Doggo Found & Guarded Her Lost Cat Until They Came To Pick It Up 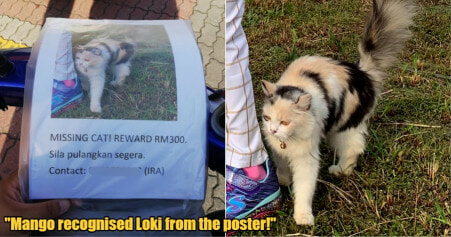