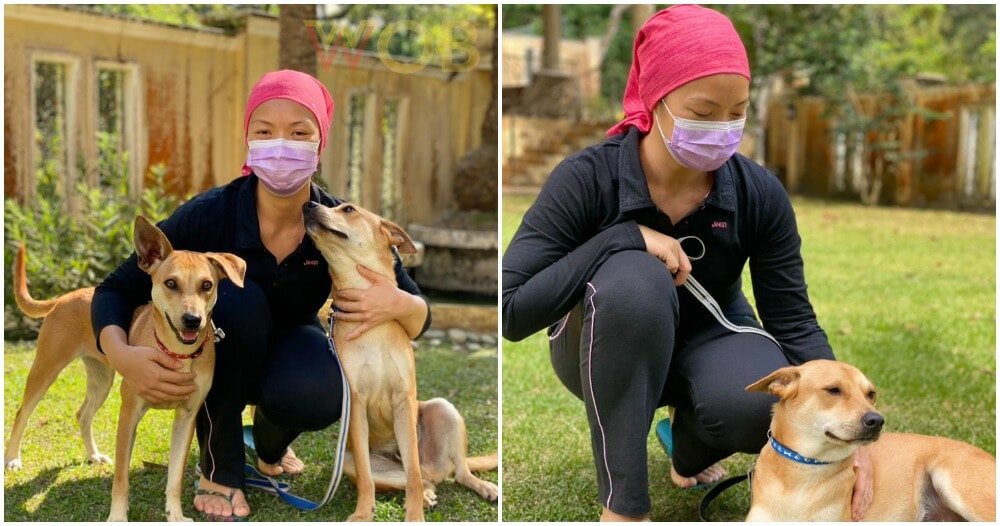 Kudos to Aaliyah for choosing love at the end of the day!

In Malaysia, there has always been this stereotype between Muslims and dogs but this woman showed all of us that to raise dogs as a Muslim, all you need is a kind heart and a clear conscience. Aaliyah has always been very fond of dogs from a young age but as the general sentiment, she assumed that having a dog was “haram”.

She even remembered asking her late father if they could get a dog to which he jokingly replied, “Yes, sure. If you’re living overseas with your ‘mat salleh’ neighbours.”

But the story of how Aaliyah actually ended up getting her doggos is intriguing as it came with another group of animals. Aaliyah lives in a housing area that’s filled with greenery where wild animals including monkeys, gibbons, monitor lizards, snakes, and centipedes are frequent visitors. For decades, they’ve tried to live together in harmony but last May, an incident happened that shook all of them. When Aaliyah and her husband left to buy groceries, they got a call from Aaliyah’s sister who said that 30 monkeys invaded their house and were having a party!

“All I can say is, imagine a scene from the movie Jumanji, only this time – dealing with the actual after-mess, smell, and feces they left all over the stairs and tables.”

After this traumatic incident, Aaliyah started thinking about the safety of her house especially since all her neighbouring houses were vacant at the time. A friend suggested that Aaliyah get her own guard dog as dogs naturally and instinctively act to defend themselves and by extension, their family and house. She brought it up with her family and everyone agreed to the idea.

Before adopting them, Aaliyah did some research and interestingly enough dogs are mentioned in the Quran in Surah al Kahf, where God not only made people as an illustrious lesson for humanity but also a dog was included as an integral part of this story. 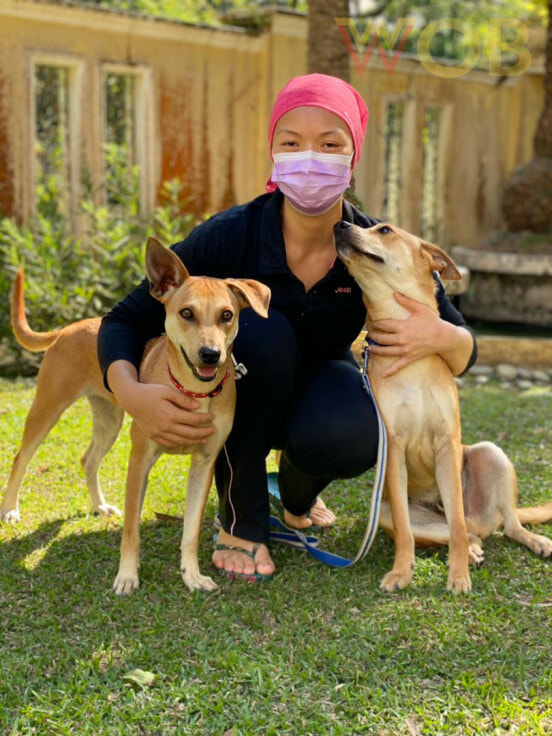 “This got me thinking, if a dog was such a bad and impure animal, why would The Almighty include such an animal who is seen by many as representing evil in a valuable story in the Quran?”

After countless research and understanding that it was permissible to have a guard dog with the intention of protecting the house, they found their Mongrel dogs, Leon and Lily. This brother-sister duo was rescued by DODA (Dogs of Denai Alam) who requested them to take not one but both siblings as they were inseparable. Leon and Lily were found under a bridge where their mother had died after birth. Unsurprisingly, they really struggled to adapt with both the dogs at first and to manage their temperaments.

“So much so that talks of giving them up were constantly put on the table.”

Since then, ten months have passed and their family has learned how to be better at managing these dogs. Aaliyah also engaged a trainer, Eyson, of the E-K9 Dog Training Academy who taught her to teach the dogs obedience and discipline.

What are some of the struggles you’ve faced?

Aaliyah started reminiscing about an event in 2014 organised by activist Syed Azmi Alhabashi called “I Want To Touch a Dog” that received so much backlash from the community. He received death threats and was even forced to go into hiding because some suggested that he should be “stoned to death” – Hence, this dog prejudice debate in Malaysia is nothing new. 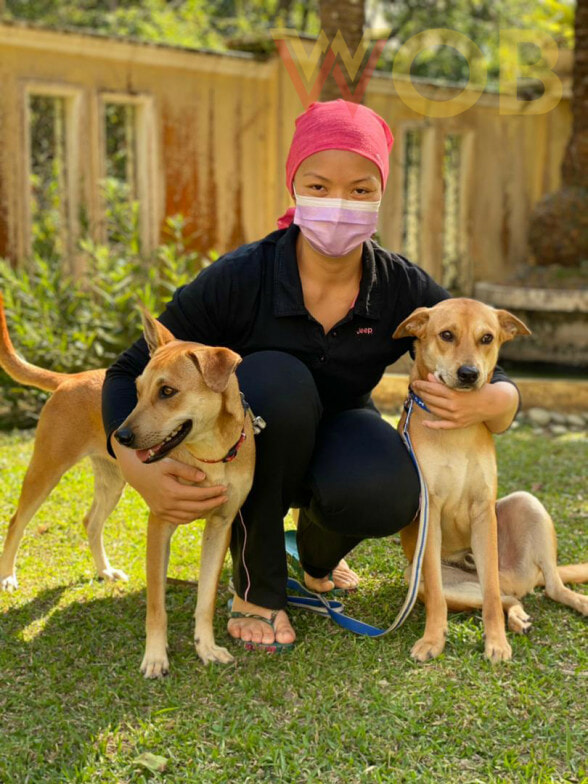 “Even though Selangor’s Islamic Religious Department states that Muslims can own dogs as working animals, for security, hunting and other functions, the general Muslim society has been brought up to think that dogs are haram, and therefore Muslims that are dog owners are the biggest sinners living this earth.”

Afraid of unnecessary confrontation, Aaliyah doesn’t post about her doggos on her social media accounts. She added that at this point, she’d gotten used to the judgemental long stares people throw her way when she brings Leon and Lily for their walks.

Once when she was picking up their litter into a dog waste bag, a lady started screaming at her at the top of her lungs and told her “Have you no shame?! You are wearing a hijab, but you have dogs! They are Haram!”

Despite this negativity, many Muslims have also randomly messaged her on social media and told her how much they respect her and that she has a beautiful soul.

What advice would you give to Malaysian Muslims out there who wish to become dog owners?

The first piece of advice she would give is to be ready to face daily judgmental looks and criticisms of breaching your faith. She also told us to think twice if you’re the kind of person that’s affected by peer pressure or public shaming, or if you think owning a dog would affect your relationship with your parents.

“I urge Muslims wanting to become dog owners to also read and research on owning a dog based on the religious guidelines and how comfortable you are with those terms.” 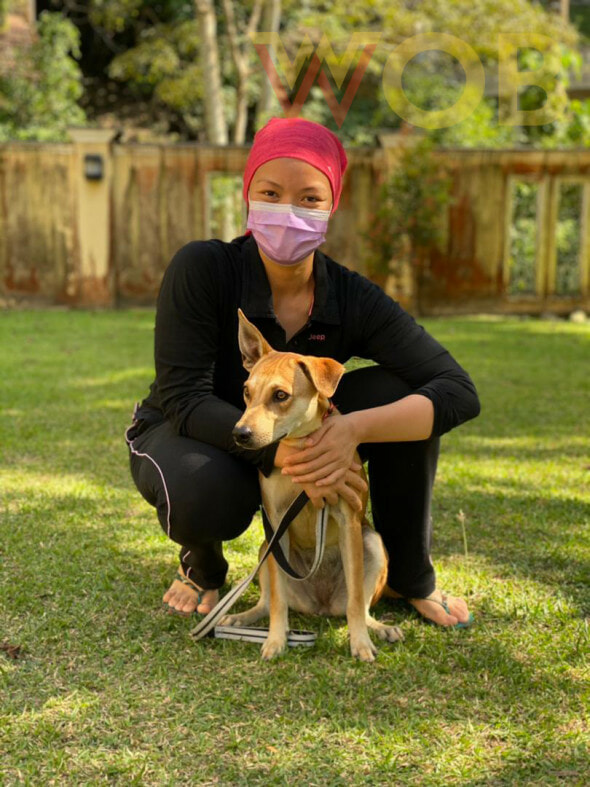 She also reminded the public to never abandon the dogs after you decide to adopt them. Finally, Aaliyah said that for her, her conscience is clear and she knows why she adopted Leon and Lily.

“I genuinely believe that there is no religion in this world that would teach us to hate, abuse or despise any animal on this earth. After all, aren’t we all created by God?”

Let us know what you think about this wholesome relationship!

Also read: “He’s the only survivor!” M’sian Adopts Doggo After Its Siblings Get Eaten By Wild Dogs 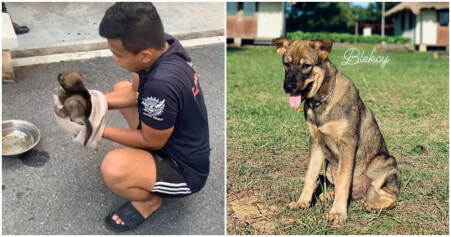