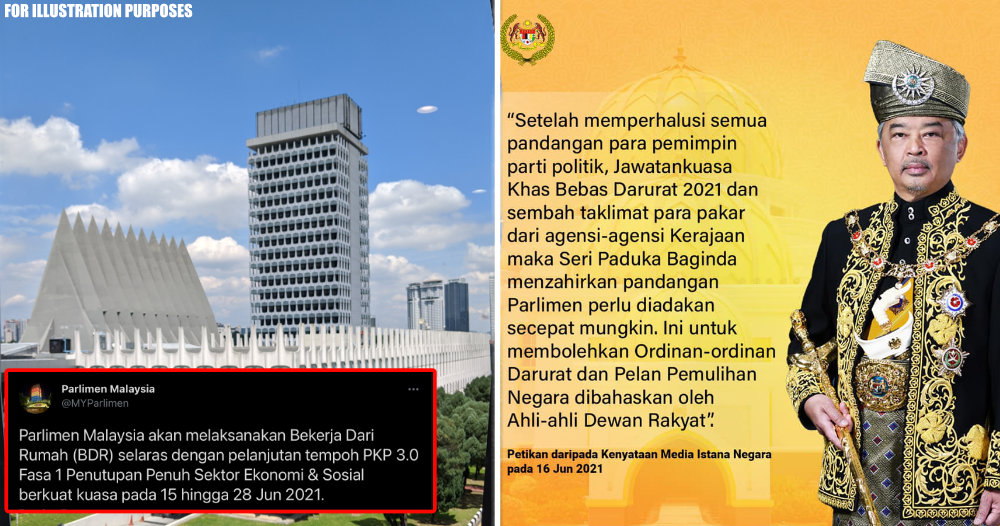 The Malaysian Houses of Parliament has recently announced on Friday (18 June 2021) that it would be ordering its staff to start working from home from 15 until 28 June 2021 in accordance to the extension of the Full Movement Control Order (FMCO) by the government. This move was despite calls from the Yang di-Pertuan Agong Al-Sultan Abdullah Ri’ayatuddin Al-Mustafa Billah Shah Ibni Al-Marhum Sultan Haji Ahmad Shah Al-Musta’in Billah and the Conference of Rulers for Parliament to reconvene as soon as possible.

In case you missed it, the Yang di-Pertuan Agong and Conference of Rulers recently held a special meeting to discuss pressing national matters on 16 June 2021 after His Majesty met with various political leaders. Following the meeting, the King and Conference of Rulers subsequently released two separate statements each which highlights several issues, including the need for Parliament to reconvene as soon as possible.

However, despite the calls by the Yang di-Pertuan Agong and Conference of Rulers, the government has yet to decide when to reopen Parliament. Prior to the King’s statement, Prime Minister Tan Sri Mahiaddin Yassin said that the Houses of Parliament would only reconvene in Phase 3 of the National Recovery Plan, which is September at the soonest, as reported by Malay Mail.

Furthermore, de facto Law Minister Datuk Seri Takiyuddin Hassan said that the Yang di-Pertuan Agong requests for Parliament to reconvene as soon as possible but never mentioned the exact date and argued that September or October is also considered ‘as soon as possible’. Takiyuddin’s controversial statement has since been the subject of a police report for allegedly insulting the Yang di-Pertuan Agong and as reported by Malaysiakini, the police has since opened an investigation regarding the matter.

Well, it seems that the Dewan Rakyat and Dewan Negara won’t be reconvening anytime soon, at least before 28 June 2021 as a Tweet by the Malaysian Parliament confirms that Parliament staff has been ordered to work from home.

This move by Parliament has been questioned by the Malaysian public on social media especially given the timing. Many commenters are asking why is Parliament only now asking its staff to work from home when the Dewan Rakyat last convened last year.

Nevertheless, the move by the Parliament administration is still in line with government’s orders as of the rulings of FMCO.

What do you guys think of the decision to only now ask Parliament staff to work from home? Share your thoughts with us in the comments. 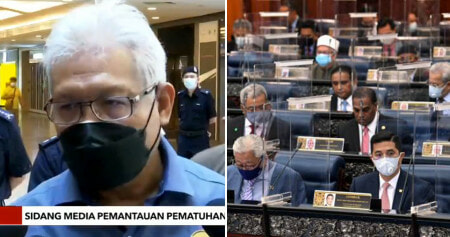