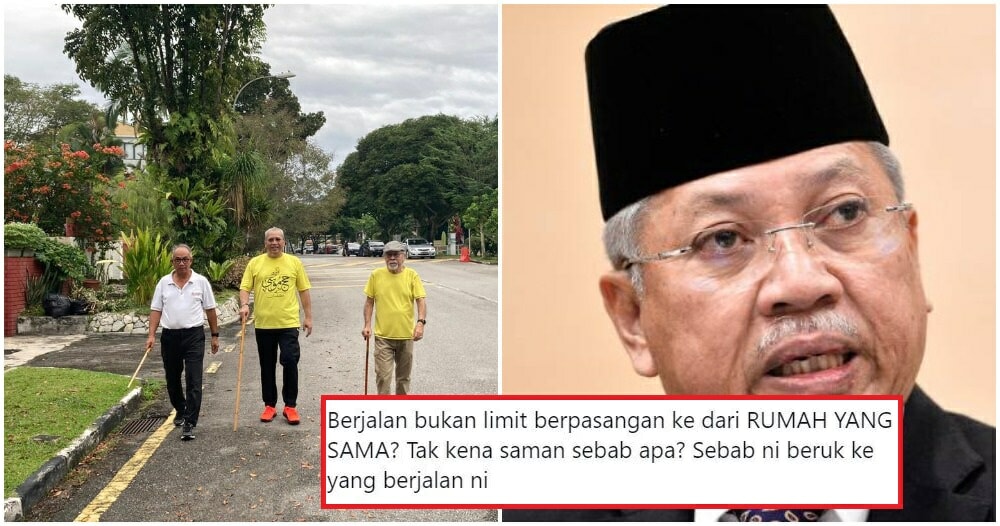 Another day, another politician violating SOPs as they can afford the fine?

Despite the second extension of the Movement Control Order nearing an end, Malaysians are still worried as the number of Covid-19 cases being reported are still fluctuating.

On a daily basis, we read about Malaysians getting fined by the PDRM for flouting SOPs but what happens when the one disobeying is a minister? Federal Territories Minister, Tan Sri Annuar Musa, was called out on Twitter after he posted a picture of himself going on a morning walk.

However, netizens were quick to point out that this is a violation of SOP as although you’re allowed to exercise within 10km of your house, only two people from the same household are allowed. Not only that, but the minister also doesn’t seem to be practising physical distancing.

“Isn’t the limit two people from the same house to go walking? Why aren’t they fined? Is it cause the ones walking are monkeys?”

Netizens also expressed their anger as Malaysians have complained when police officers immediately fine them for minor mistakes, why is there a double standard for ministers.

“Why are the ministers now like this? They just keep violating SOPs. Is it because they can afford the fine?”

Responding to the backlash, Tan Sri Annuar Musa tweeted a reply saying that he wasn’t violating the SOPs and they just happened to bump into each other while they were brisk walking. 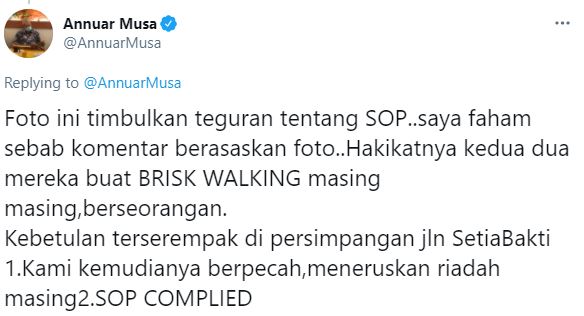 ‘This photo is invoking criticisms due to set SOPs and I understand. The truth is, both of them were brisk walking alone and we happened to bump into each other at the Jalan Setia Bakti 1 intersection.

We then split up, continuing our exercise. SOP COMPLIED!”

Despite his explanation, netizens refuse to believe the minister and one netizen questioned that if a normal Malaysian were to give such an answer to the police, would the police accept it?

Do you think the minister should not get fined based on his explanation? Let us know what you think! 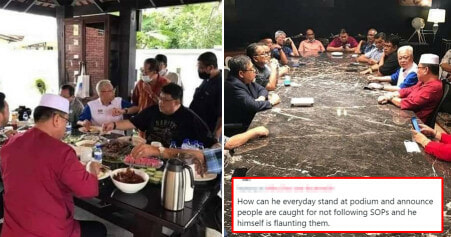