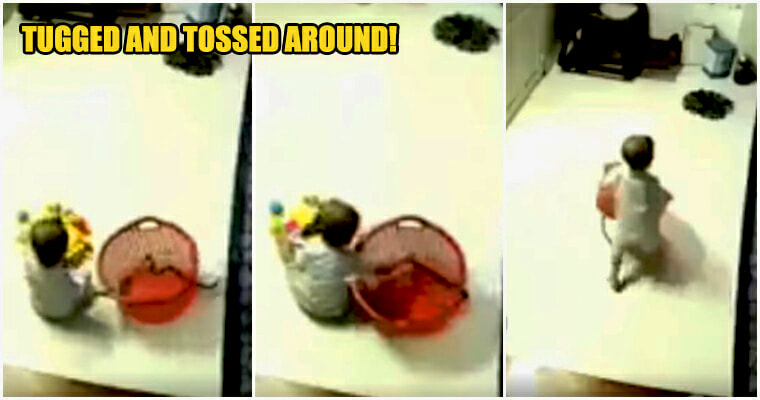 That’s it! Barricade your house! Glue your windows! Plug every sink! Danger noodles are invading our territory!

Few days ago, a Facebook page called ‘Durian Media’ posted a video of a toddler playing with a living snake, probably thinking that it was a toy! The video was only 2.21 minutes long, but it was enough the cause 16,000 viewers to feel on edge.

According to Sinar Harian, the incident allegedly happen in Shah Alam. The video starts with a little boy unloading his toys out of a basket. As he overturned the basket, he found something that immediately captured his attention. The baby tugged on the snake’s body right off the bat, trying to pull it out of the basket.

The snake was stuck in one of the basket’s holes. When tugging doesn’t seem to work, the baby tried to swing the basket around before hoisting it into the house.

Unfortunately, the snake bit his knee partway and the baby can be seen crying loudly, possibly out of shock and pain, and that alerted his guardians.

Following this, a man, presumably the father, rushed to pull the baby away from the snake. A woman tried to tie up the baby’s leg after they were sure the baby was safe. She was most likely attempting to stop any kind of venom spreading through the baby’s body.

Anyone watching the video could definitely feel the tension

“Almighty God! Watching this made my blood run..”

“He even played with it! Almighty God!”

“Sent chills down my bones! I’m scared to watch it till the end.”

Wow… We really hope that the snake isn’t poisonous. In this case, we really can’t blame his parents because obviously they had CCTV installed around the house as a precaution to ensure everyone’s safety, but unforeseen incidents like this are why children should always be supervised!

Also read: Little M’sian Boy Hospitalised After Being Bitten By Venomous Snake That Hid In His Shoes 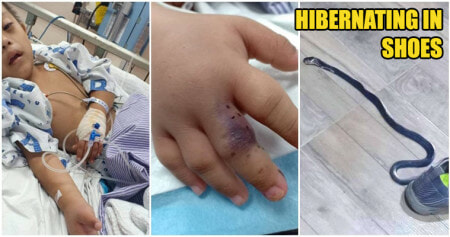