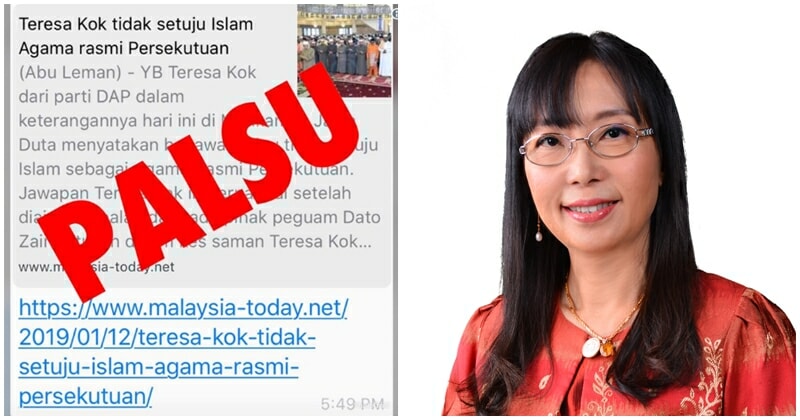 Primary Industries Minister Teresa Kok took to Twitter to express her dissatisfaction having been linked to a Malaysia Today’s article entitled “Teresa Kok Tidak Setuju Islam Agama Persekutuan” (Teresa Kok is against Islam as Religion of the Federation). 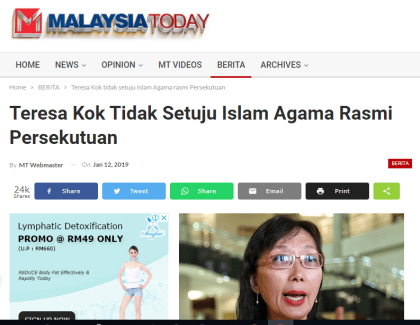 The article which talks about Teresa’s response in a line of questioning by the lawyers of Dato Zaini Hassan, mentioned how Teresa was guilty of uttering her disagreement that Islam should be the religion of the federation.

This, however, was denied by the Seputeh MP.

Teresa tweeted, “This is a slanderous article. To those who slander, you’re going to hell.”

Her condemnation of the article was based on the claims that she was racist, recounting her previous statements that were against anything related to the Malays and Muslims.

Some showed support for the under-fire MP, with several suggesting the minister take action against the article.

One netizen wrote, “You need to take legal action against the website.” 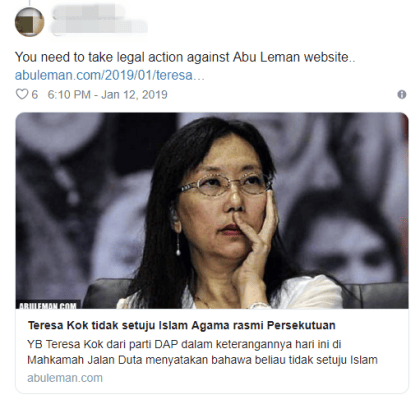 The Deputy Chief Minister of Sabah Datuk Seri Wilfred Madius Tangau also took part in the discussion, commenting, “God and Religion is the miraculous business of the divine.”

“Let us pray for God the divine whispering and touching the hearts of all concerned to work for the greater good of all.”

God and religion is the miraculous business of the devine. Let us pray for god the divine whispering and touching the hearts of all concerned to work for the greater good of all.

The Malaysia Today article has received more than 24k shares.

MP Teresa Kok recently sued Azwanddin Hamzah for defamation for linking her to the Subang temple incident, alleging her to be racist and corrupt.

It is time that we as Malaysians we make do without slander in our efforts to help spur Malaysia forward.

Share with us your views on the matter in the comments section. 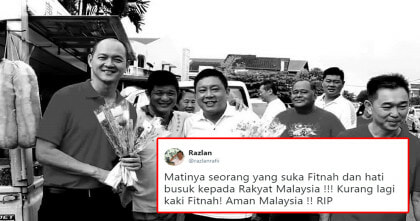