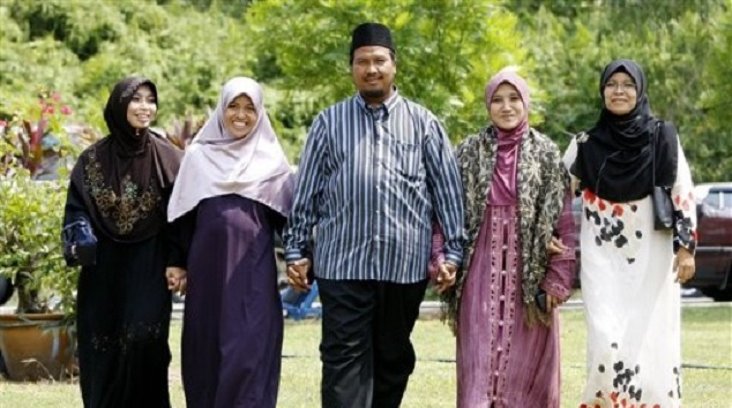 Fancy a second wife, but don’t want your first wife to know?

It is a well known fact in Malaysia that a Muslim man can marry up to four wives. With the consent on the first wife or the Syariah court, a Muslim man will be able to take additional wives.

Though in the recent years, monogamous relationships are more established. I mean, ask you girlfriend/wife if you could have a second lady in your life (not referring to your mom) and tengoklah apa dia jawap.

A member of Malaysia’s “Ikhwan” Polygamy Club, Mohd Nizamuddin Ashaari poses with his four wives. They have 24 children in total, from three to 24 years old, who live in a five-room bungalow outside the capital of Kuala Lumpur.

Disclaimer: Image does not relate to article and is for illustration purposes only.

However, for those who would like a second wifey on the side, there’s an ‘agency’ founded in the state of Terengganu, that enables Muslim men to take a second wife without the consent of the first wife or the Syariah court. Interested?

This agency has been promoted to guarantee a hassle-free process of obtaining a second wife. The couple will also be provided with a marriage certificate and registration card, all at the cost of only RM3,500.

However, to the horror of its victims, this service was nothing more than a scam. They soon found out that the certificates and registration cards were all but pieces of paper, unrecognized in the face of the law.

A representative from the Malaysian Anti Corruption Commission (MACC) has shared that 3 suspects, ages between 30 to 43, have been apprehended and believed to be responsible for the fraud.

“The first to be nabbed was the 43-year-old religious officer soon after he had received the final payment of RM1,000 and was about to hand over the false documents to a couple.

It is learnt the perpetrators would charge RM3,500 per ‘registration’ and that the marriage will be registered in a neighboring country. As such, bypassing the first wife and the Syariah court.

The scheme does sound quite brilliant, but unfortunately the success of the scam was short-lived.

And I wouldn’t want to be there when the first wives find out.