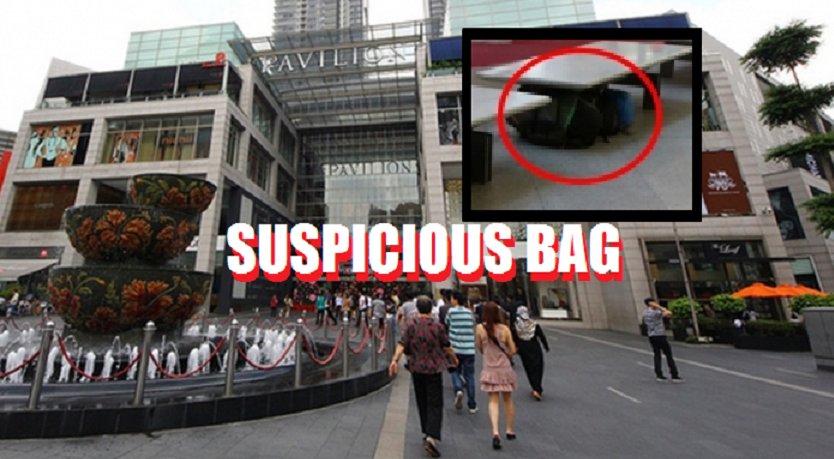 17 Jan – A bag was found under one of the seats in Pavilion mall and it caused quite a stir for shoppers.

Due to a recent bombing in our neighboring country, Indonesia and information of possible bomb threats in our very own country, authorities have been on high alert for any suspicious activity and this was one of them. Without hesitation, bomb experts were brought in to carefully inspect the bag.. only to find out it was fully stuffed with clothing.

Upon further investigation, it was found that the bag belonged to two Korean travelers aged in their 20s and another in her 40s. The two foreigners were shopping in Pavilion mall and decided to leave their bags there because they didn’t want to carry them around.

Officers ruled out any suspicious activity and let the two go after questioning.

It’s reported that the incident took place around 12.30pm on the second level of Pavilion mall. The bag was found left alone under one of the seats near the elevator.

Authorities handled the matter swiftly and took every necessary precaution when they dealt with the alleged threat. The Sunday afternoon was rather crowded but security closed of the section for safety purposes. As to not cause any public panic, security and police officers tried as discreetly as they could to take care of the situation, while at the same time steering shoppers away from the vicinity.

Some curious people nonetheless detected something amiss and stopped to gather around the outer parts of the area, slowly drawing in a crowd.

Some people even complimented the Malaysian authorities for their commendable quick actions to settle the tense situation. It was a relief that there was no bomb threat but just a careless mistake two tourists made.