In recent years, there has been an increasing number of fraudulent job ads online that either scam you for your money or con you into something worse. Recently, a girl from Singapore received a message from an unknown number asking if she was looking for a job. She asked for some details but later found out that he just wanted some hanky panky action from her.

In disgust, the lady warns others by posting up a PSA for every woman out there. 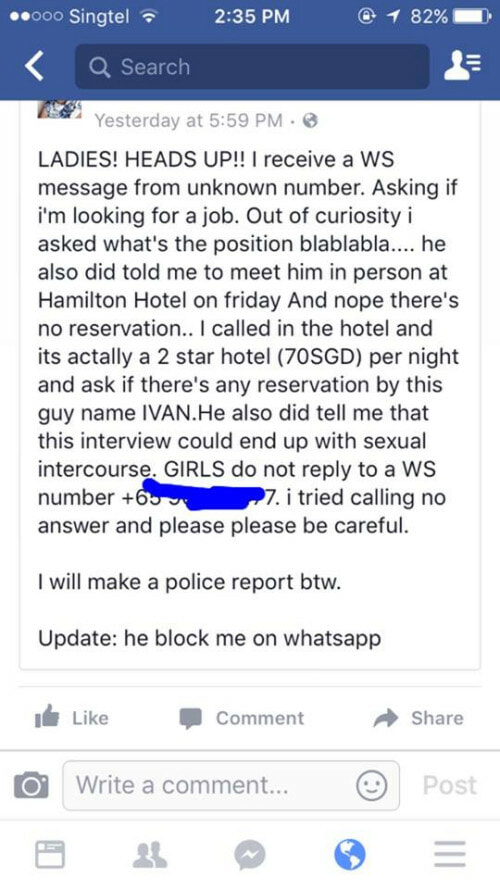 Zul Haikal Jaafar who stumbled across her post decided to play around with the guy. He disguised himself as a 17-year old girl called Amirah to fool the guy into giving up a selfie of his perverted self.

The reason why he chose the age 17 because for that age is still considered as a minor and ‘commercial sex with minors under the age of 18 is a punishable offence pursuant to Section 376B of the Penal Code. Any person who obtains for consideration the sexual services of a person, who is under 18 years of age, shall be punished with imprisonment for a term which may extend to 7 years, or with fine, or with both.’

So here’s how he tricked the man into giving up his own identity: 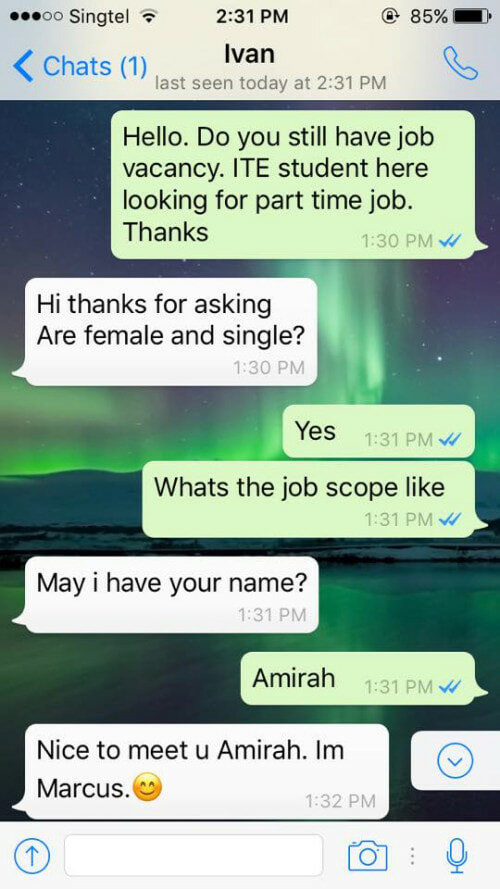 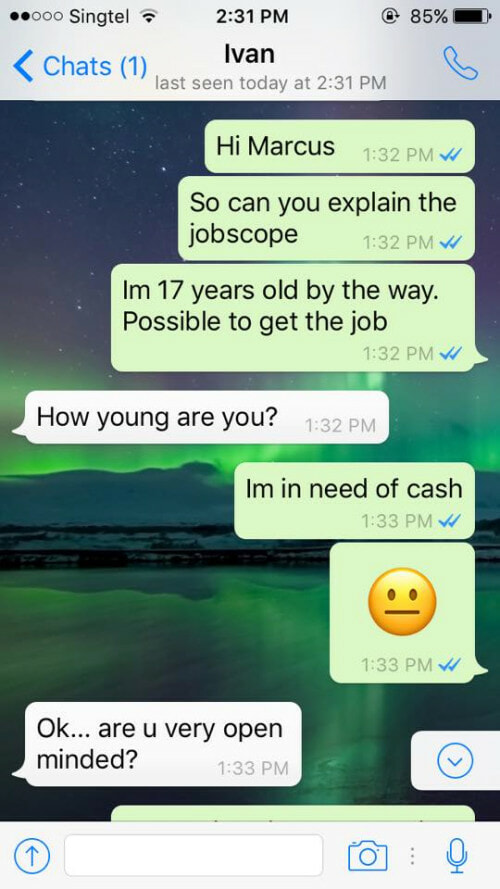 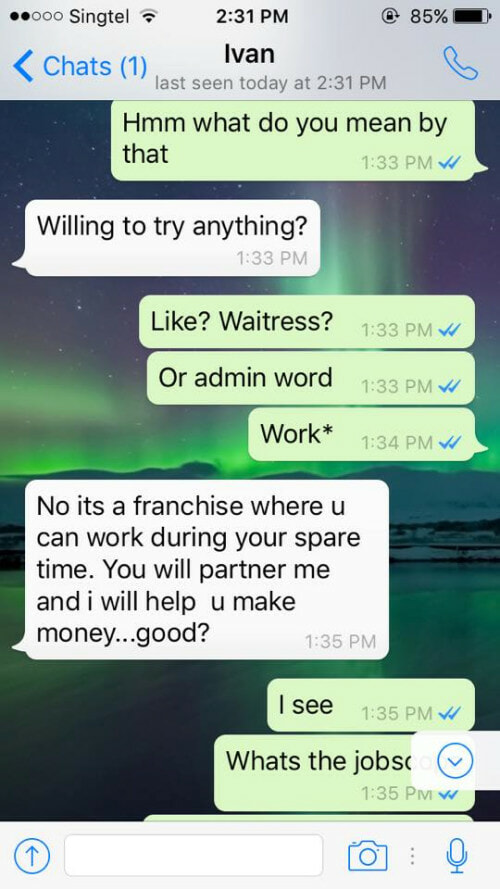 Notice how this ‘Marcus’ guy tried to avoid explaining the job scope? 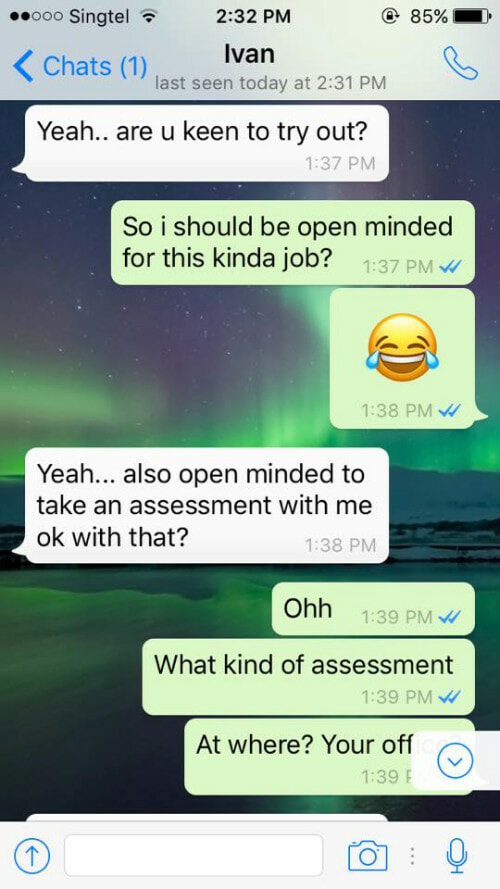 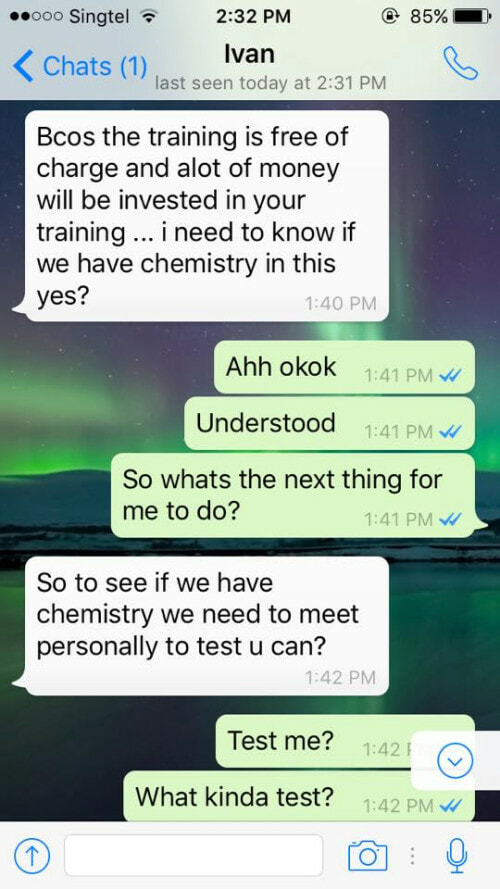 Hmmm, mental and physical…doesn’t sound dodgy at all. NOT! 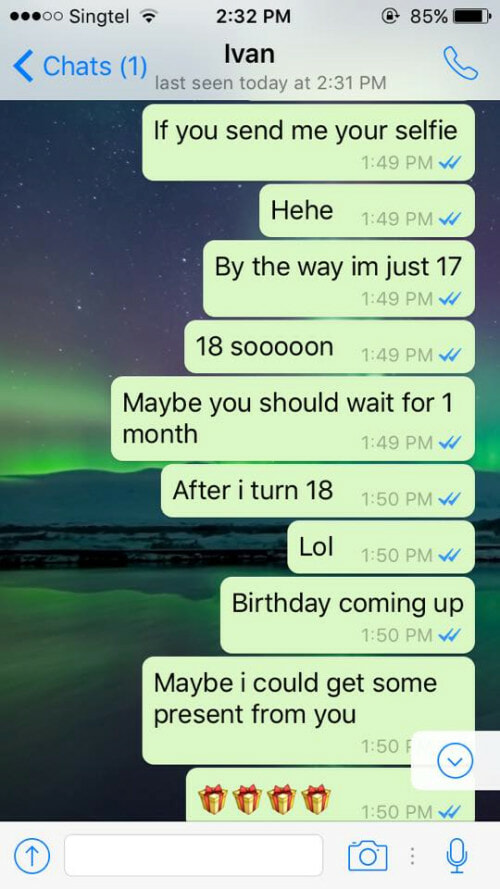 See how persistent this guy is even after finding out this person is just 17 years old? 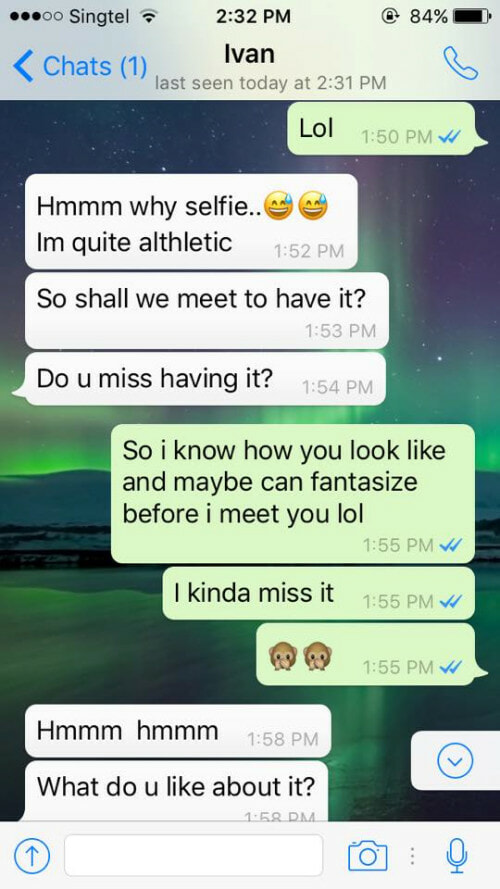 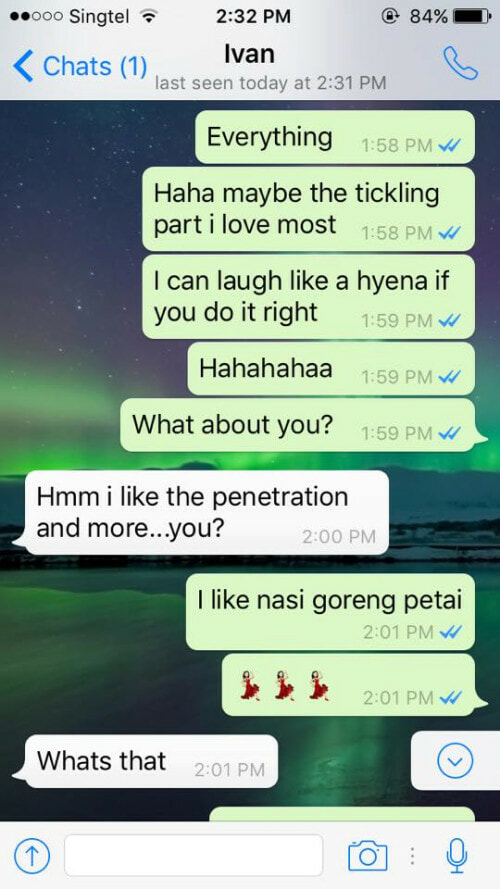 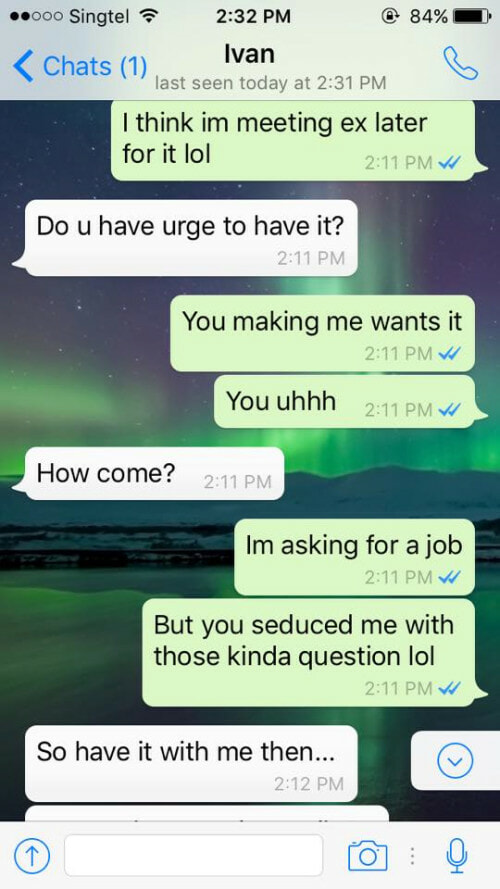 Then the 17-year-old asked Marcus for a selfie to see how he looks like. 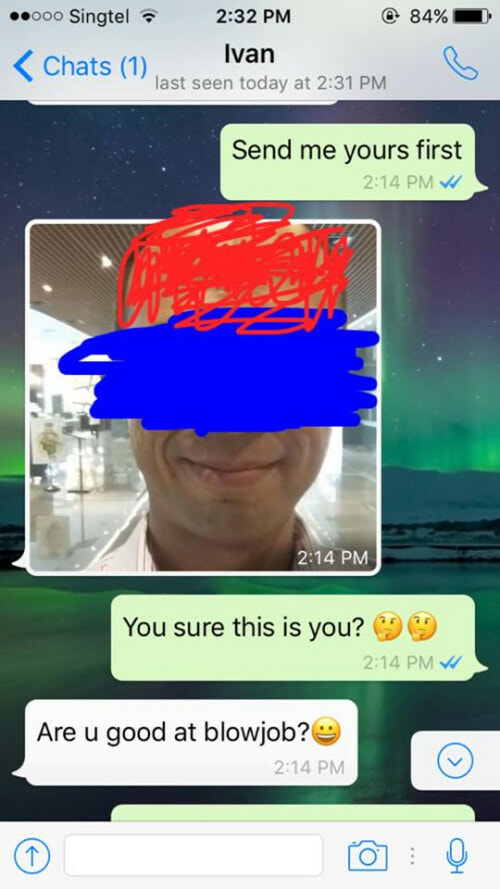 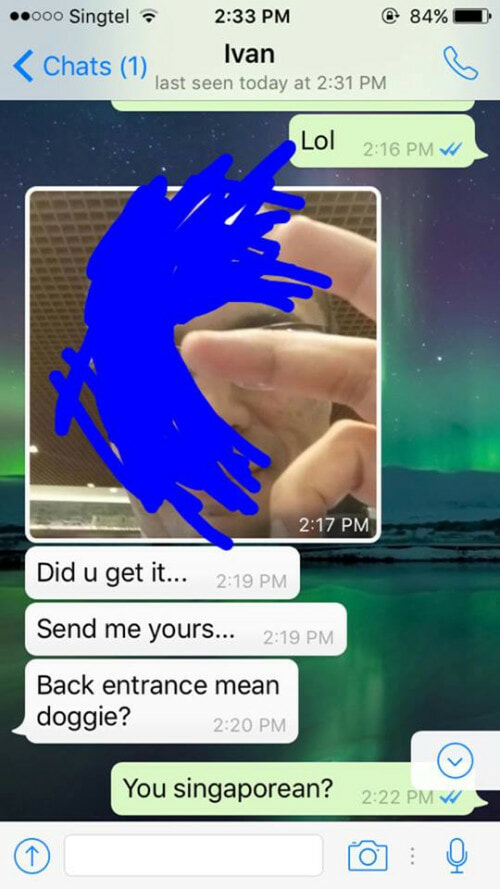 Ewww! He is an old uncle! But ‘Marcus’ probably had the shock of his life after receiving the other person’s selfie. 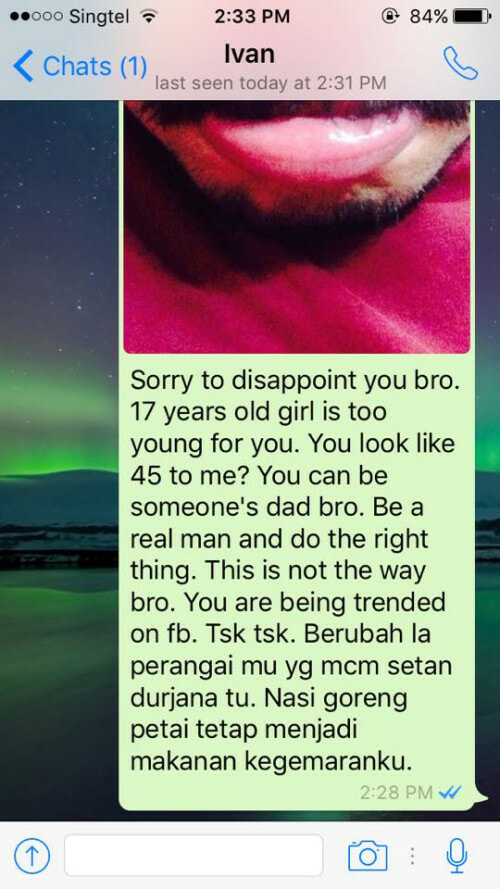 I agree bro, nasi goreng petai is the best.

Anyway, serves this ‘Marcus’ guy or whatever his name is, right. Since Jaafar got his image, we hope that he’ll do something with it. Like, at least lodge a police report on the pervert. Seriously, 40+ year old still wanna try luck with 17-year olds. *puke*

Personally? We think Jaafar shouldn’t have cencored his face but reveal it for the whole world to see.

As sick (both disgusting and with an awesome last burn) as this thread was, share this not just for the serious troll he just received, but also to spread the message about scams like this.

Good day and be safe, uolz!