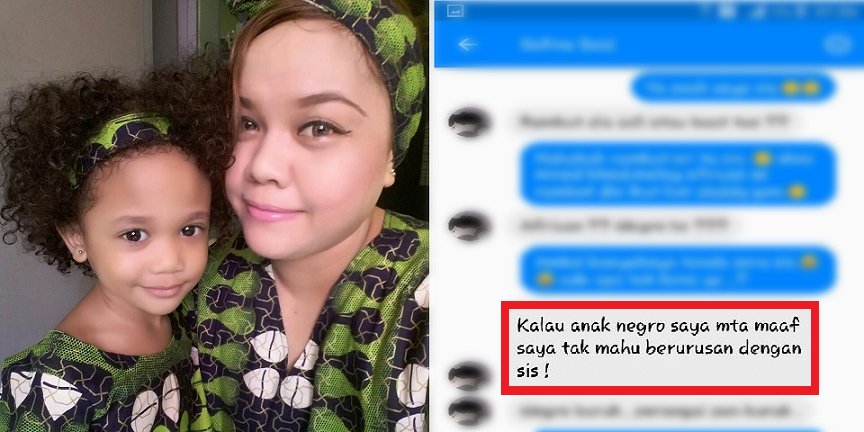 With the Internet and globalisation, we are blessed to be exposed to information, people and cultures worldwide. A lot of us have widened our eyes and perspective, learned not to judge, and know that regardless of any one’s skin colour, each of us are all equal.

However, it’s a shame that there are some people who are racist, especially for no reason at all!

Emma Adelia took to Facebook to recount her horrible experience with a potential customer. She shares 4 screenshots of her conversation with a lady named Safina Said and boy will it make you boil.

The conversation started off where Safina messaged Emma on Facebook to enquire about the ‘daging jeruk’ she was selling. 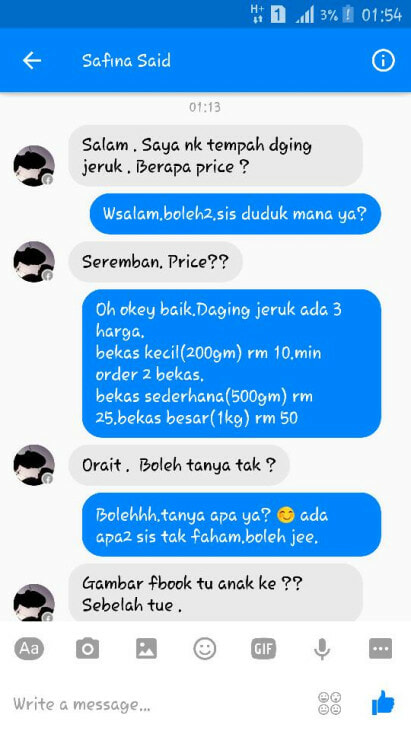 After Emma responded to her queries, Safina asked more questions which were rather peculiar. The lady asked if the person in her Facebook profile picture was her daughter, to which Emma responded yes.

Curious, Safina further questioned if her daughter’s hair was natural or permed because it was curly.

Emma clarified to the woman that her hair is curly because her daughter is ‘mixed’.

“That’s her natural hair. She’s mixed blood of Malay African so her hair has her dad’s genes.”

What Safina said next would absolutely make you want to high five her face with a brick.

The lady wrote, “If you have a negro child then I’m sorry because I don’t want to do business with you! My husband doesn’t allow me to have any involvement with Negros.

Negros are nasty, their attitude is bad too.” 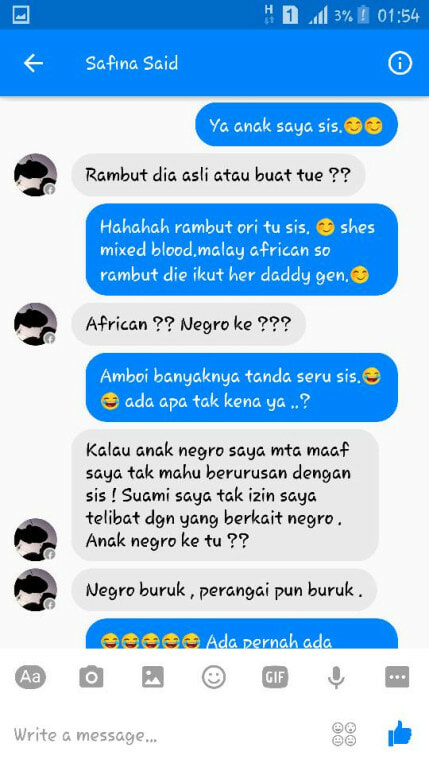 Emma who laughed at her shallow thinking asked if she had any previous bad run-ins with Negros.

And behold, Safina said ‘no’.

So she is basically passing very bad judgement although she had NEVER crossed paths with a Negro before.

Emma who was obviously not having anymore of her racist remarks asked back with much class, “is that your husband in your profile picture?”

“Yes, that’s my husband.” she replied.

Giving her a taste of her own medicine, Emma replies,

“Sis, Sorry ya. I also don’t think I can do business with you. Yes, my daughter has Nigerian blood, but she’s very beautiful. Unlike you and your husband, ugly face with ugly heart.

Why don’t you try buying from someone else. Since the beginning you already showed that you’re a racist. I’ll be honest, I’m really anti-racist 🙂 Good night.” 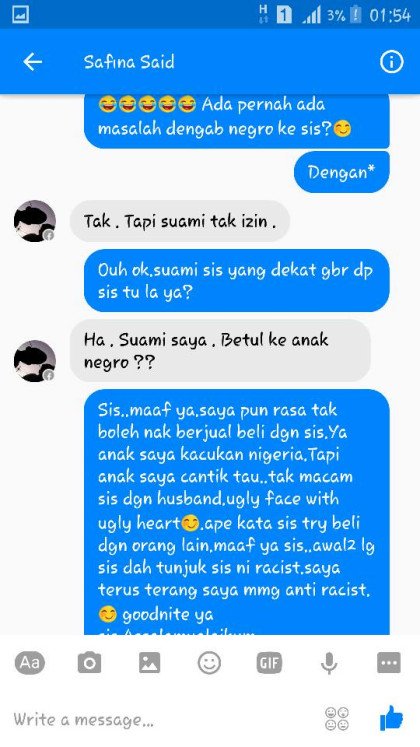 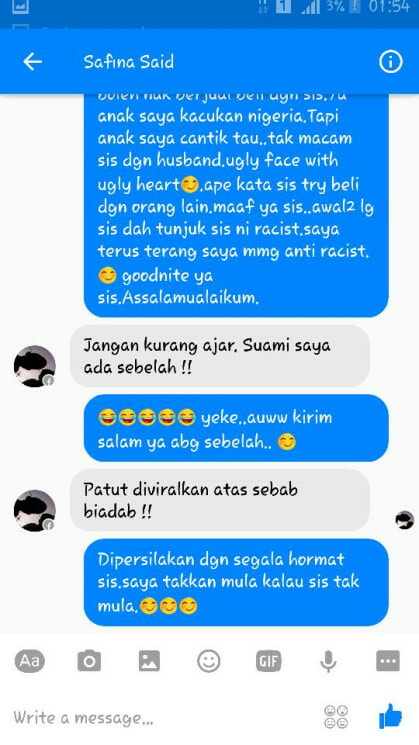 Safina still had the audacity to accuse Emma of being rude, saying, “Don’t be ill-mannered! My husband is just beside me!”

“Oh really? Send my regards to him :)” Emma retorted. She couldn’t have handled that conversation any better.

Netizens who came across her post shared her outrage, questioning why such a person would even exist.

“These kind of species still exist? And here I thought there were already extinct.” Mary commented.

After having unfortunately dealt with a customer like Safina, Emma updates that she’d rather lose one racist customer than have to put through with her attitude, and how blessed she is to have everybody’s support.

“Thank you everyone who has been so positive on Facebook, especially after my post went viral. It was unexpected yet so meaningful to me. I lost 1 customer but now I’ve more than 10 new customers. Thank you everyone. Even feel like crying! I’m speechless!”

Also read: Malaysians Are Furious Over Bata’s “Racist” Advertisement, But Here’s the Truth 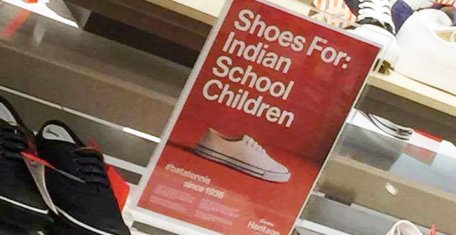 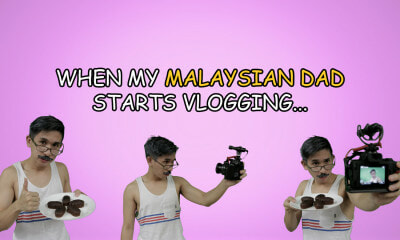 When My Malaysian Dad Starts Vlogging