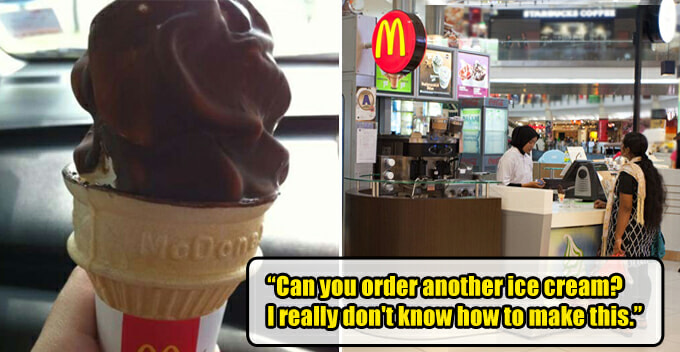 After reading this, you’d start to appreciate just how skillful McDonald’s employees are, especially those who put together a ChocoTop. It’s not just dip and serve okay, there’s more than that.

On 23 January, a netizen who goes by En. Barie shared a hilarious experience on Twitter regarding how a new staff dropped his ChocoTop, not one, but three times into the chocolate coating. 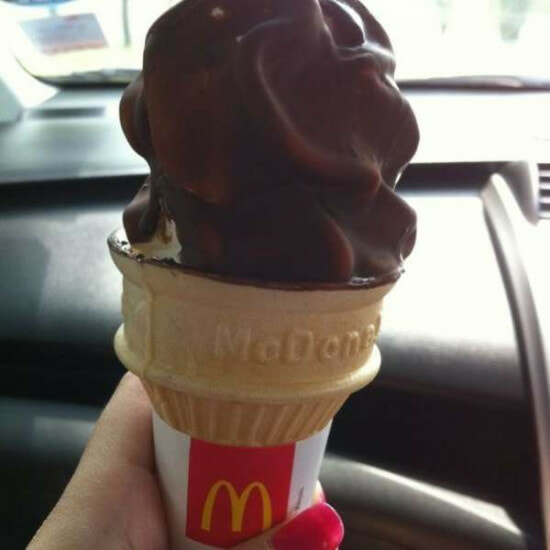 Here’s the translation of what’s written.

“Just now I ordered a ChocoTop (at a Mc Donald’s kiosk). The worker who took my order immediately changed his face expression from smiling to trembling. He even suggested me to order another ice cream.”

En. Barie didn’t know that the worker was a new-comer with very little skill in making a ChocoTop. So he insisted on his order.

“He dipped the ice cream into the chocolate coating and the vanilla ice cream slipped and dived into the coating. First attempt was a failure.”

Second attempt was a failure as well, but he was steady only.

“Before the third attempt, he said, ‘Bang, can you order another ice cream? I really don’t know how to make this.’

“I smiled at him and ordered a normal one. Suddenly, he took a deep breath and said, ‘Let me try again, bang.'”

The worker then took another cone and fill it up with some vanilla ice cream. Before dipping it into the chocolate mix, he smiled and took a deep breath. Without hesitation, he speedily yet carefully executed it.

“I heard a loud scream that was filled with joy and excitement. People were looking at my direction. He said, ‘Bang, I’ve made it!'”

This hilarious thread made thousands of netizens laugh as no one knew assembling a ChocoTop would be such a daunting task for the new workers. In fact, some ex-Mc Donald’s workers who are well-trained in making ChocoTops shared their pro tips in the comment section.

“I used to work at one of those kiosks. Indeed, it was hard for new workers. To prevent the ice cream from diving into the coating, you should start filling the cone from the bottom and not from the side, and be swift when you dip the ice cream,” an ex-worker commented.

The determination and perseverance displayed by this man is simply incredible. We salute him for not giving up that ChocoTop! 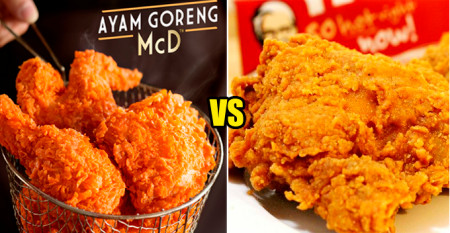