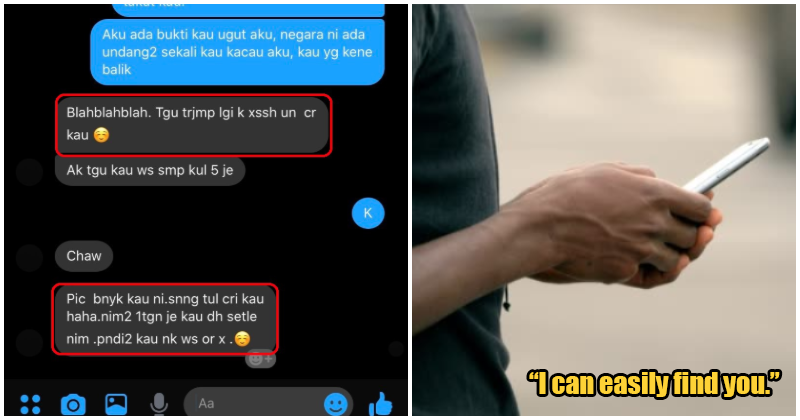 Boys and girls, no means no. There’s no point getting all angry or bitter about it, or getting yourself in trouble because of it.

If someone is not interested, just let it go.

That’s definitely a lesson this guy needs to learn, after Ariel (@Nurfarhanim_) took to Twitter to showcase how he had direct messaged her on her Facebook page asking for her number as he had a question to ask her via WhatsApp.

Just like any sane person would, Ariel had told him (a person she barely even considers an acquaintance) that she would rather not give out her number to someone she barely knows, and that he can just ask her whatever he needed to on Facebook since they were already there.

Ariel wrote, “Humans these days are very scary, only because I chose not to WhatsApp him, he threatened me like this.”

She showcased multiple screenshots of the incident.

He had asked her, “You’re not someone’s wife, right? I just had to make sure. Can I get your number for WhatsApp? We can continue chatting on WhatsApp. (His number). WhatsApp me? I’ll wait for you there, I have something I need to ask you.”

Ariel then told him that he could just ask her on Facebook Messenger as she’s busy and that she doesn’t want to give out her number as she’s not close to him.

The guy, obviously unhappy at the fact that she refused to give him her number, first tried to persuade her by saying he’s not going to do anything criminal with her number, but when he realised that his persuasions were not working, he started calling her cocky before saying, “Don’t regret it after this, be cocky now okay?”

She proceeded to tell him that she had no problems with him and that he had no reason to bother her.

He then went as far as to say, “Don’t make so much noise here. I’m no longer like how I used to be, I don’t rollover so easily anymore. I asked you to WhatsApp me, but you’re making noise. So when I see you next, I’ll silence you. Remember that. You better WhatsApp me, your life will continue to be peaceful, I’ll be waiting.”

Ariel responded by saying she now had proof that he is harassing her and that Malaysia had laws against his behaviour.

Upon hearing that, he continued, “Blah blah blah. Wait until we meet again, it won’t even be hard to find you. You have until 5pm to WhatsApp me. You have a lot of photos, it’ll be easy to find you. One hand is enough to settle you. Best be smart on whether you want to WhatsApp me or not.”

He eventually came to the realisation that everything he had said to her could be used by the police as a very good reason to apprehend him, and hence, he then deleted multiple messages from the chat, but not before Ariel made sure she had solid proof by making screenshots of the conversation.

It also turns out that this isn’t the first time he has harassed girls.

One netizen took to Ariel’s thread to share her experience with the harasser, stating that she had known him from playing the mobile game, PUBG, before he got ridiculously clingy despite their very casual relationship via the game. He eventually put up her phone number on Facebook while telling the general public to avoid her. 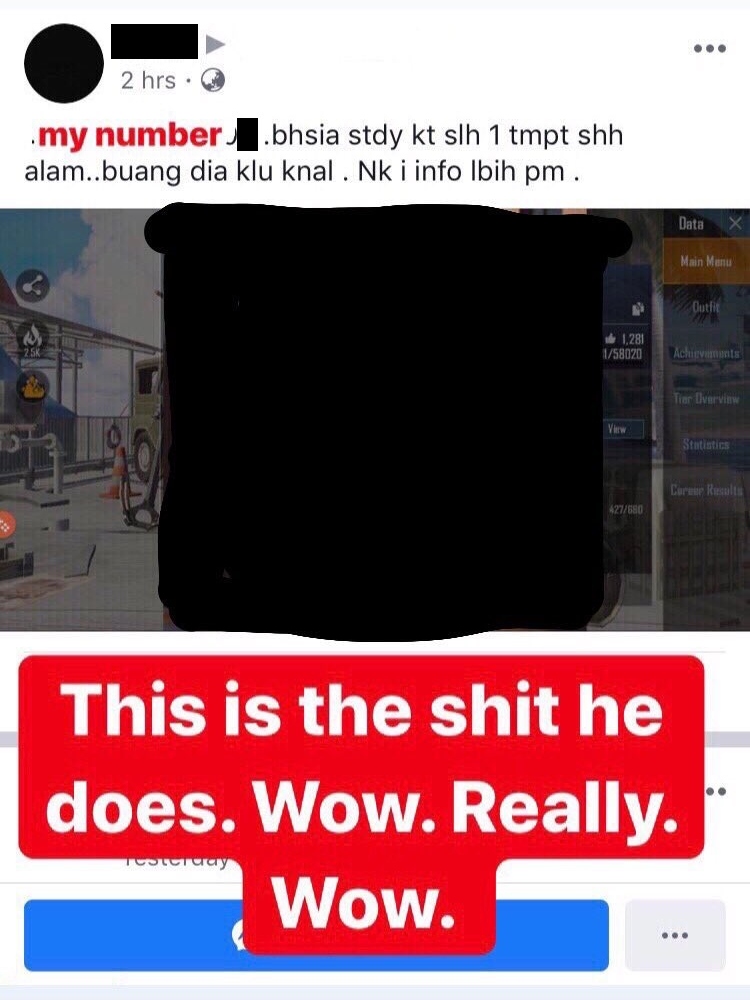 The harasser wrote, “(Phone number) This Bohsia studies at one of the institutions in Shah Alam. If you know her, get rid of her. For more information, private message me.”

Bohsia is the Malay slang word for a girl who skips school to loiter with boys.

We hope that Ariel has made a police report against the man as he’s clearly unfamiliar with the concept of consent, does not take no for an answer and could be a danger to other girls as well.

Ariel’s posting has since garnered over 2,000 retweets.

There is no such thing as dual meanings when a girl says no. No means no.