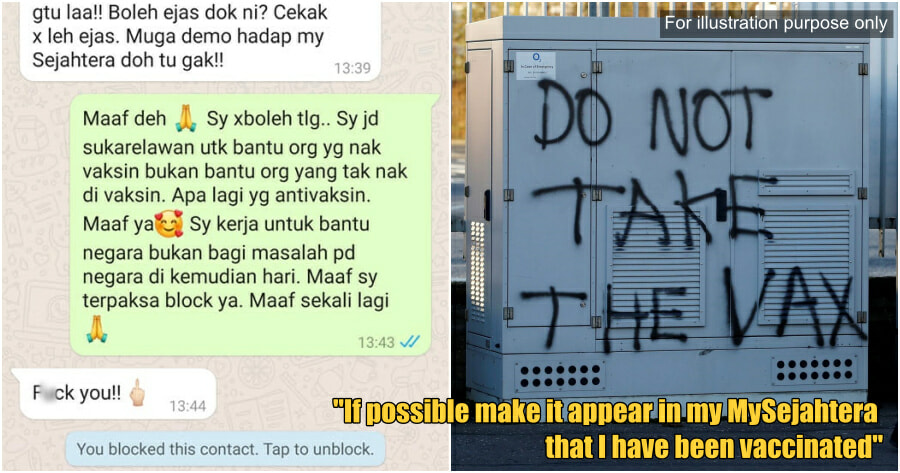 “It’s not that I do not want to get injected, it’s just that I don’t believe in the vaccine. Did you know that this is all part of the Jewish agenda?”

As we head towards herd immunity and the relaxation of restrictions for those who are fully vaccinated, the anti-vax community on the other hand has been trying to find ways to enjoy the same perks as those who have been vaccinated allegedly through excuses, bribery and scams.

This is shown in the huge booming market of the selling and buying of fake vaccination certificates on the Internet. But it doesn’t end there.

On 9 August, a PPV volunteer in Kelantan shared her experience in dealing with an anti-vaxxer, which has since gone viral.

In the Facebook post titled “Why Can’t You Do It For Me”, Nor Azlin Alink said that an anti-vaxxer had contacted her via WhatsApp asking for help. “The person said that they did not want to get vaccinated. But they wanted a MySejahtera vaccine certificate.”

In the conversation between the two, the anti-vaxxer asks Alink why she is unable to key in the change as she handles the MySejahtera part of the process. Alink explains that she can only key in those who have prior appointments and she can’t change information as she likes.

The anti-vaxxer remained adamant and explained to Alink on how she could do it easily.

The person then said, “It’s not that I do not want to get injected, it’s just that I don’t believe in the vaccine. Did you know that this is all part of the Jewish agenda?”

“You can just let my MySejahtera display as if I have gotten my vaccine even though I did not,” said the person.

Alink then replied, “Sorry, I can’t help you. I became a volunteer to help people get vaccinated not those who do not want to. I’m working to help my country not to cause problems to it later on. I’m sorry but I must block you.”

To which the person replied, “F*ck you!” 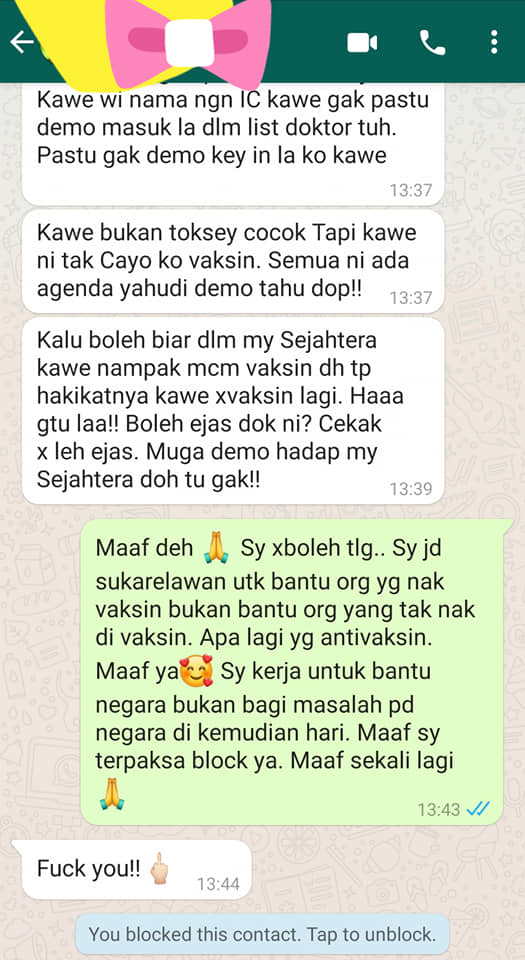 In her Facebook post, Alink explained her thoughts and emotions after being confronted by such anger. “It really is different from anything else. I’ve never received any weird requests like this during the whole time I was working at the PPV,”  she said.

“Even if you were to offer me two million for the request, I will still not do it. It is as if you do not respect the work that we do and that the request was something simple”

She noted that the person is being selfish and is not thinking about anyone else. “You’re not thinking of the future? If you were to contract Covid and die from it, and if they check that apparently you have been vaccinated fully? This would cause panic amongst people who have been fully vaccinated,” she said.

“You’d be allowed to enter into restaurants, travel cross districts and states. You could be a potential spreader of the virus all because you have faked your vaccination. Why don’t you think about all that?” 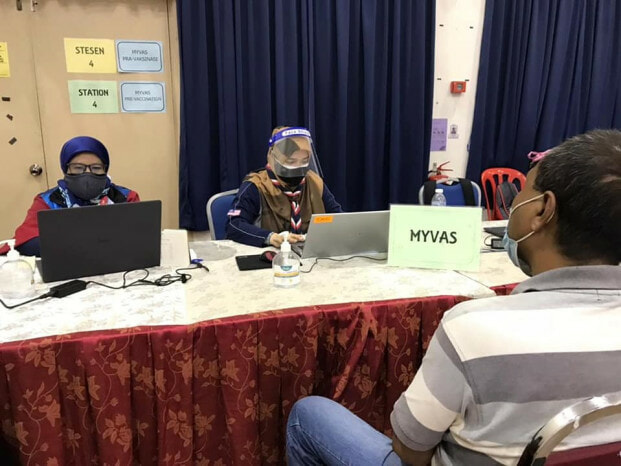 She also stated that another issue is the harsh language used towards her. “I’m only a volunteer at a PPV. But we should respect everyone no matter what.”

“I’m sharing this story not to embarrass you (as I did not reveal your name), but this story should serve as a reminder towards other anti-vaxxers. If you don’t want to get vaccinated, keep quiet. Don’t bother us with weird requests. Take on your responsibility towards the country and for each other.”

Netizens are on her side

Alink’s Facebook post has garnered plenty of attention and is currently sitting on 3,500 likes and 6,400 shares. In the comments section, many netizens are asking her to report the individual to the police as this is not something that should be treated lightly.

The post on Twitter which has also received plenty of support has also led another PPV volunteer to share his story of an anti-vaxxer attempting to bribe him in order to not get vaccinated.

“Happened to me at a PPV. He asked me to not inject him and fake his status and in return he will give me RM50.”

“So I just gave him the eye and injected his arm. Ok next please,” he added.

Let’s hope that most of the country gets vaccinated so that we can go back to some form of normalcy. Let’s focus on getting yourself and your loved ones vaccinated. A reminder: STOP BEING SELFISH.

Also read: Anti-Vaxxers Are Afraid They’ll Turn Into Zombies Like In “I Am Legend” Movie 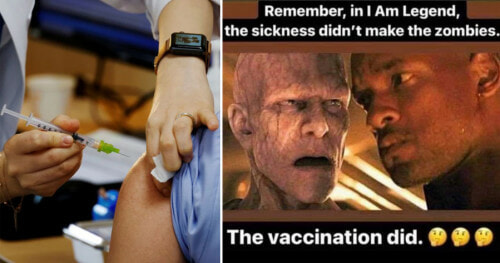