Our teenage years are the time when we start to mature and learn more about ourselves, but this 16-year-old didn’t just dip her toes into the grownups’ pool; she dived right in! A Johorean girl was questioned by her mother after she found a hickey on her neck, and she went on to admit she had sex with five different guys!

The teenage girl had her first sexual encounter not long after completing her PMR examinations in October last year. After a male friend and two of her cousins picked her up from school, they went home together, as reported by Oriental Daily. Upon finding no one was at home, they had sexual relations with the then 15-year-old girl. That means, not only did she lose her virginity as an underage child, she also lost it to three different people at the same time!

After the incident, the girl went on to have sex with two other guys, which happened just this past Friday, on March 1. Not long after that, on March 3, her mother found the loose thread that would unravel the entire story – a hickey on her daughter’s neck. Upon further questioning, she uncovered the sickening truth, and urged her daughter to lodge a police report.

On that same day, at 11:30pm, police managed to detain five males aged between 16 and 20 years old, and hold them for questioning. According to Iskandar Puteri district police chief Assistant Commissioner Dzulkhairi Mukhtar,

“The five suspects do not have criminal records prior to this incident, and will be remanded for four days starting March 4. Three of the five suspects are secondary school students, and the other two are a dropout student and a mineral water hawker respectively.”

It is understood that the teenage girl lives with her mother alone in Kangkar Pulai, an area in Iskandar Puteri, and that her father is deceased. The age of consent in Malaysia for both males and females is 16 years old. Hence, if the five males are found guilty, they may be convicted of rape.

Hopefully, the guys get the justice they deserve for taking advantage of the young girl, and the girl receives proper counselling to prevent her from treading on the same dangerous path again! 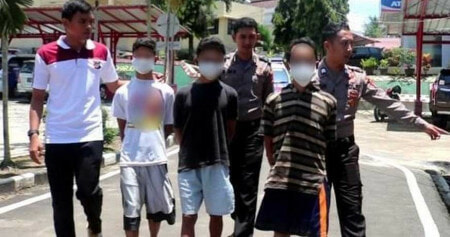