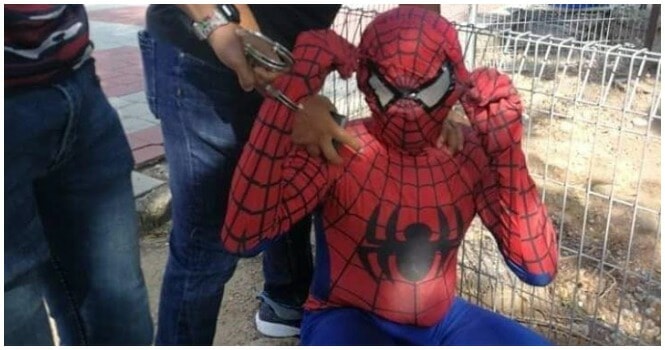 It looks like being a ‘superhero’ did not save this man from getting arrested! A Bangladeshi man dressed as ‘Spider-Man’ was caught red-handed by the officers from Melaka Immigration Department, according to New Straits Times. He was apprehended along Jalan Kota, Bandar Hilir on July 14 (Sunday) for misusing his tourist visa.

The man (age 38) was arrested at around 4.20pm while he was standing there so that tourists could take photos with him. Yikes, his spidey-sense must’ve not been working.

Mohd Fauzi Abdullah, the State Immigration Director, said that the suspect who worked as a busker would dress himself as Spider-Man and charged children and tourists if they wanted to take pictures with him. So much for being your friendly neighbourhood Spider-Man!

He added that the masked culprit charged RM5 for each photo that was taken with him. The man reportedly has an assistant, a female in her 40s and a child who assisted him to sell toys.

According to Mohd Fauzi, the suspect was previously employed by someone but is now working for himself. The man would hang around tourist spots to look for customers and would only be at the location for a short while.

Further background checks unmasked that the man’s documents were actually false. “He is now being detained for overstaying and the case is investigated under Section 15(1)(c) of the Immigration Act 1958/63,” Mohd Fauzi explained.

It looks like he got caught in a sticky situation! This Spider-Man has definitely strayed too far from home! 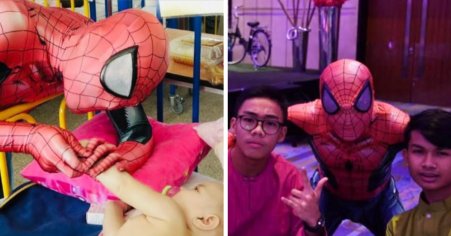