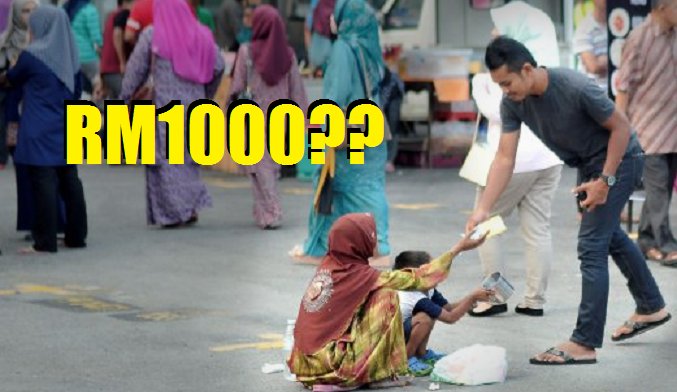 “They may seek for alms from folks on the streets, but these beggars may actually have more money than the givers themselves,” said Penang Social Welfare Director Said Sidup.

Sidup said that based on the information acquired from beggars picked up by authorities during operations, some of them could pocket up to a cool RM1,000 a day. Even more so during the season of Ramadan where people are typically more giving.

“It is because the generosity of Malaysians that gives opportunity for beggars to thrive on their kindness,” he told reporters after a programme launched to educate the public on the need to address problems of beggars.

Said also advised Malaysians to be more cautious when giving out alms to beggars, as many could be backed by syndicates.

He said members of the public who wish to donate should offer their donations to registered bodies, like mosques and welfare organisations.

The Penang Social Welfare Department conducted 150 operations from January to May this year, aiming to clean the streets of beggars. A total of 201 beggars were rounded up.

“A total of 142 of them were locals, while the remaining were foreigners, he added.

– As reported by Bernama

Looks like when the infamous Singaporean foodcourt screamer told the deaf and mute worker to “go and be a beggar!”, it may not have been the worst of insults after all.

Jokes aside, amongst those in genuine need, there are those who try to exploit other’s sympathy.

Clearly, the issue of beggars are a grey area in social issues.