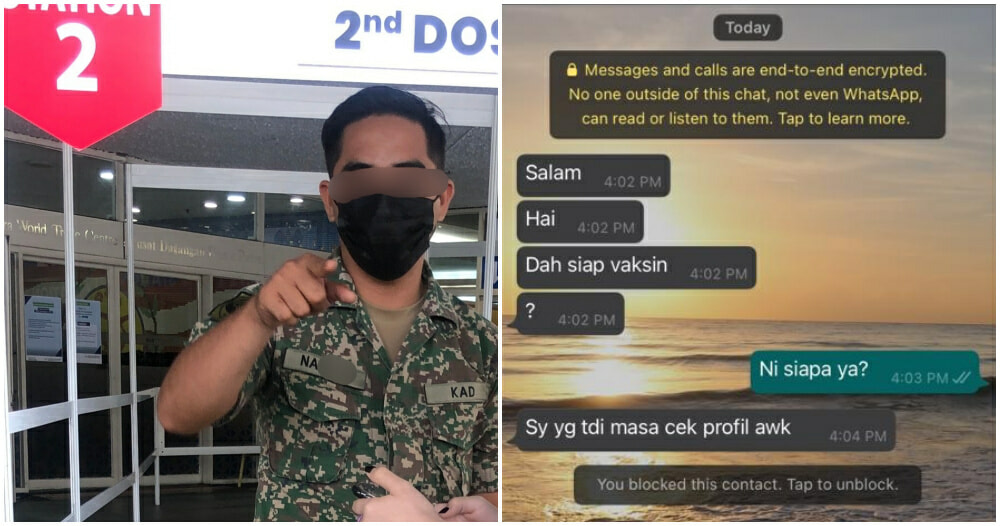 JKJAV has issued a statement on the issue.

Recently, a Twitter user, Idris (@Idwishh) shared an incident that happened to his 18-year-old sister when she was at the World Trade Centre (WTC) on 13 July for her vaccination.

Idris said a Malaysian Armed Forces (MAF) officer invaded his sister’s privacy and harassed her via WhatsApp without even her giving him her contact number.

Hi @JKJAVMY @KKMPutrajaya. Want to report vaccine staff Nazren for taking my sister's phone number without consent. She is 18. This is at PPV WTC 13/7. Hope disciplinary action is taken. Tq. Cc @Khairykj pic.twitter.com/ij6niejQIg

Speaking to WORLD OF BUZZ, Idris explained that his sister was at the PPV with their mother at around 2pm to receive their second dose of the Covid-19 vaccine. Everything went well until she received a message on WhatsApp from an unknown number.

The random text she received read:

“Salam. Hi. Done with your vaccination?”

Idris’ sister replied saying “Who is this?” to which the stranger responded saying, “I am the one who checked your profile just now.” 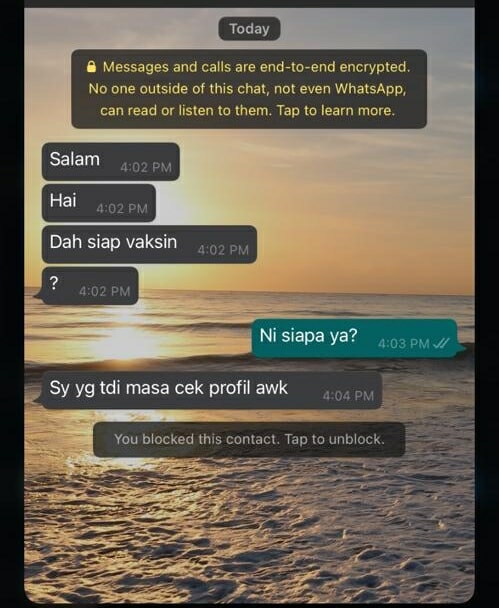 Most likely memorised her details within seconds

Based on Idris’ assumption, the officer might have memorised his sister’s details when she showed him her phone during the check-in process.

“These people are the first to greet you and they have to check your MySejahtera Profile to prevent anyone with close contact from entering the PPV. My 18-year-old sister showed him the status, which is displayed at the top of the MySejahtera profile [that shows] one’s name, IC number and phone number.”

“He must have memorised her number within a few seconds when she showed him her profile, since the staff wouldn’t need to check my sister’s phone anymore after that.”

As Idris’ mother loves to document moments, she went through her phone gallery and found that she did in fact have a picture of the officer in question with his name displayed on his uniform. 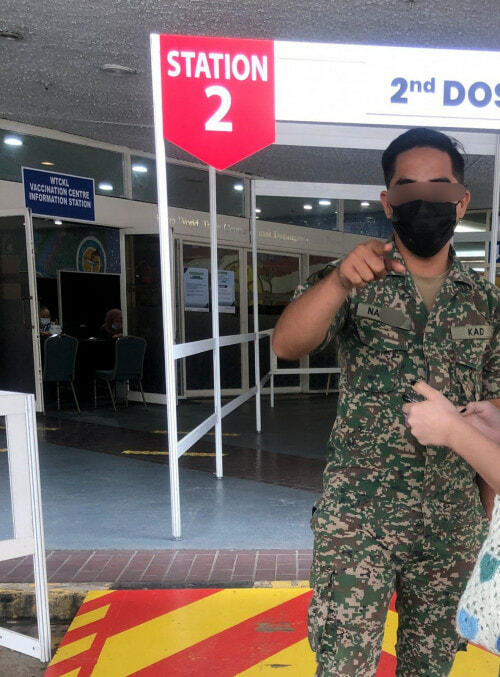 Idris noted that the rest of the staff and officers that his sister had to deal with afterwards were all female.

“My sister was very frightened that a stranger knew where she was. She got very worried. Once she knew who it was, she immediately blocked him.

I hope this is spelt out clearly for the men/apologists out there who make light of this harassment.”

Idris added saying, “I hope he gets a warning and this is a lesson for him and other harassers. A few people said to lodge a police report for PDPA infringement but I don’t want to take it too far. I hope he knows that what he did was wrong and will never do it again and for all those in power who abuse it in the name of harassing women know that it is never okay and there will be consequences.”

More women were allegedly harassed by the same officer

Idris told WORLD OF BUZZ that he had a feeling that this is not the first time the officer has done this. True enough, when Idris took the matter publicly on social media to alert JKJAV and KKM, a couple of other women replied to his tweet confirming that they too received similar messages from the same officer.

WORLD OF BUZZ had the opportunity to speak to some of the alleged victims and they filled us in with the details of their encounter with the officer in question. 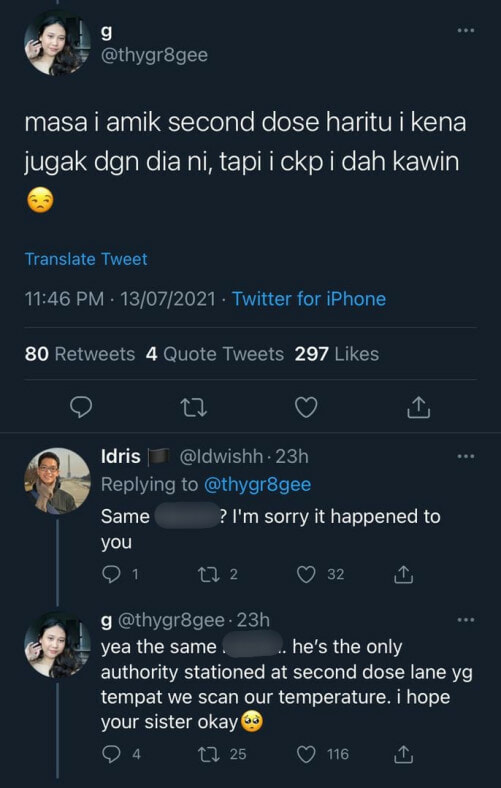 One of the victims, @thygr8geei, said that she was with her mother at WTC, heading towards the lane where the second doses are administered, which apparently is where the officer is in charge of the station.

“I was standing in queue when suddenly he [the officer] just plainly said: “Miss come here lah where there is shade, if you become dark no one will want you.”

“He was standing very close to me. It was so uncomfortable for me. Then when checking my MySejahtera, he said: “You don’t have a boyfriend?” to which I replied saying “It’s okay, I’m already married,” and I walked away after completing my check-in and temperature scan,” @thygr8geei said.

Another victim, @UwUmairahadi, told WORLD OF BUZZ that in her case, it was her sister who was allegedly harassed by the same officer.

“She completed her first dose and was trying to exit the WTC building but was lost at the Level 1 parking basement. After looking around for a while she still could not find any similar route from the entrance earlier, so she asked the officer who was there.” 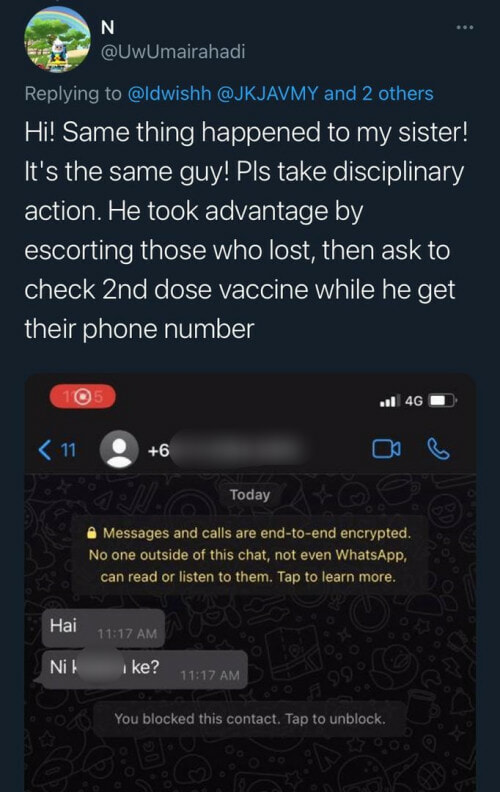 The officer (the same one in question) allegedly showed her the elevator to reach the entrance. He apparently said the elevator is not supposed to be used by the public but since she was in a rush, she could follow him.

“While on their way to the entrance, the officer asked when is her appointment for her second dose. She told him she isn’t sure yet and he apparently insisted for her to open up her MySejahtera app.”

“Showing him that the MySejahtera application has not updated the page yet, he asked her to open her profile section on MySejahtera. When she opened her profile to show it to him, she saw him holding out his phone like he was taking a picture of the screen,” @UwUmairahadi told WORLD OF BUZZ.

Later on, @UwUmairahadi’s sister allegedly received a message from the officer, which she ended up blocking.

Disciplinary action has been taken against the officer

Jawatankuasa Khas Jaminan Akses Vaksin (JKJAV) took to Twitter last night (14 July) to announce that they have looked into the matter and have informed the officer’s agency.

“We have taken note of this issue. CITF would like to inform that disciplinary action has been taken against the officer by his agency, which has a policy of no tolerance for the behaviour as has been reported.” 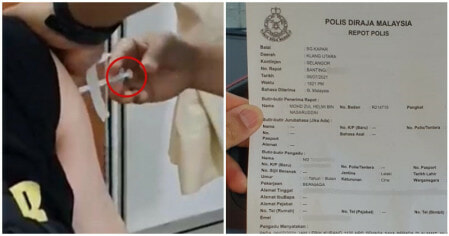