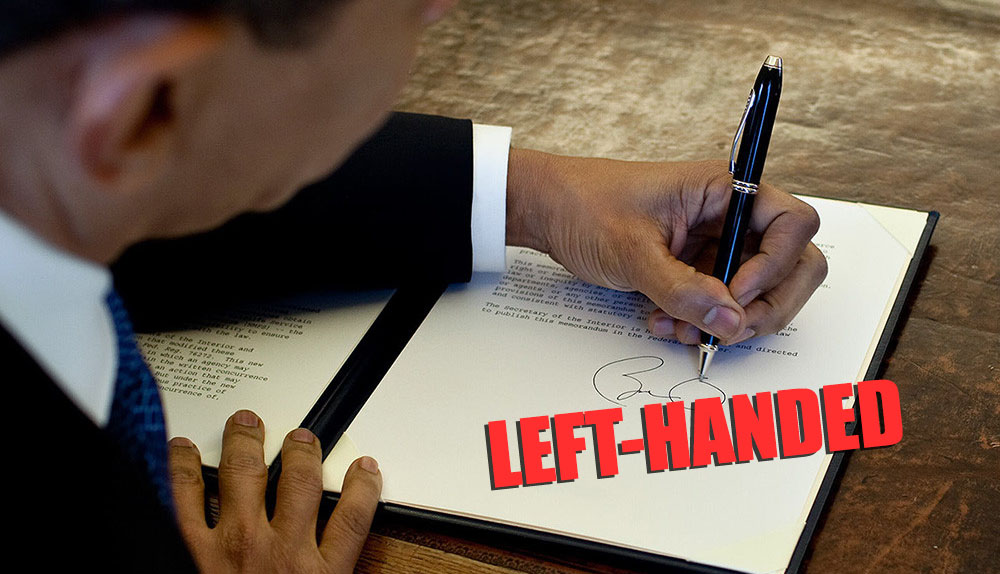 Only about 10% of the world’s population is left-handed and sometimes being different (or I’d like to call it special) has its own ups and downs.

As of February 1st, people suffering from severe cases of left-handedness may be eligible to receive social security benefits.

Lefties everywhere celebrated a long awaited victory with the passing of the Justice for Dexterously Challenged Act, which adds left-handedness to the growing list of recognized disabilities. The JDC Act was readily welcomed by President Barack Obama (pictured above), who is left-handed himself. He carefully signed the document, taking not to smear the ink, a common problem among lefties.

President of the Left-Handed Nondiscrimination Association (LHNA) Mary Cavil told us, “We’ve been fighting a long time for this day. Left-handedness is associated with creativity and going against the grain, but what people don’t seem to realize is that many of us struggle with everyday tasks like adjusting the car stereo or using a can opener. And others are subject to harsh discrimination, being told by school teachers that writing left-handed is a sign of the devil.”

While some lefties may have the luxury of being more ambidextrous than others, Mary suffers from ELHD, or “extreme left-handed disorder,” rendering her right hand completely useless and making it impossible for her to hold down a job.

With over 33 million new eligible Americans, applications are already pouring in. Want to be part of it?