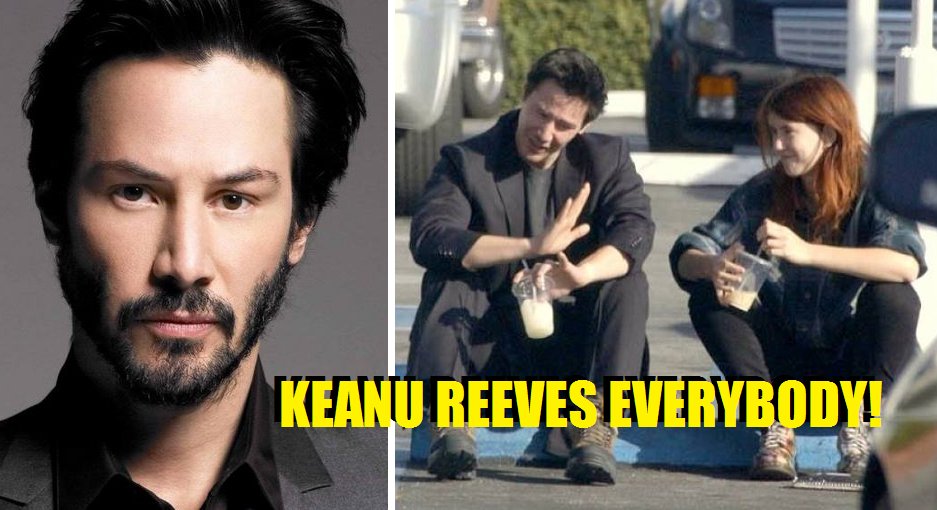 Unlike some celebrities that don themselves in the limelight, Keanu Reeves is a little bit different. He’s known to be the down to earth man and often described as modest, unobtrusive and rather quiet or shy. Instead of being most celebrities who feel high and mighty, Keanu leads a normal life and even noticed the small things that happen around him.

So when someone as awesome as him posted his new Facebook update, fans and non-fans alike were touched by his kindness and couldn’t help but share it over 18,000 times in less than 16 hours.

“I was walking and stopped in for lunch at a little cafe. From my window I saw a young teenage girl out in the cold, squatted down by the side of the road, holding a small bundle in her arms. She was panhandling, people were mostly walking by ignoring her. She just looked broken.

I finished up my meal and went outside, went through my wallet and thought I’d give her $5 for some food. I got up to her and she was sobbing, she looked like she was 14-15. And that bundle in her arms was a baby wrapped up. I felt like I just got punched in the chest.

She looked up putting on a game face and asked for any change, I asked her if she’d like some lunch. Right next door was a small quick-Trip type grocery store, I got a can of formula for the baby (very young, maybe 2-3 months.), and took her back to the cafe though I’d just eaten.

She was very thankful, got a burger and just inhaled it. Got her some pie and ice cream. She opened up and we talked. She was 15, got pregnant, parents were angry and she was fighting with them. She ran away. She had been gone almost 1 full year.

I asked her if she’d like to go home and she got silent. I coaxed her, she said her parents wouldn’t want her back. I coaxed further, she admitted she stole 5k in cash from her Dad. Turns out 5k doesn’t last long at all and the streets are tough on a 15 year old. Very tough. She did want to go back, but she was afraid no one wanted her back after what she did.

We talked more, I wanted her to use my phone to call home but she wouldn’t. I told her I’d call and see if her folks wanted to talk to her, she hesitated and gave bad excuses but eventually agreed. She dialed the number and I took the phone, her Mom picked up and I said hello.

Awkwardly introduced myself and said her daughter would like to speak to her, silence, and I heard crying. Gave the phone to the girl and she was just quiet listening to her Mom cry, and then said hello. And she cried. They talked, she gave the phone back to me, I talked to her Mom some more.

I drove her down to the bus station and bought her a bus ticket home. Gave her $100 cash for incidentals, and some formula, diapers, wipes, snacks for the road.

Got to the bus, and she just cried saying thank you over and over. I gave her a kiss on the forehead and a hug, kissed her baby, and she got on the bus. I get a Christmas card every year from her. She’s 21 now and in college. I’ve never really told anyone about this. I just feel good knowing I did something good in this world.

Be the change you wish to see in the world.”

There’s no doubt the Keanu is an awesome human being, though the authenticity of the story is not certain and has been claimed to be from a Reddit user. However, this story still opened the eyes of many people around the world, spreading positivity all around. In these complicated times where race, nations and religions are facing problems, the way we can help is by always showing kindness to others.