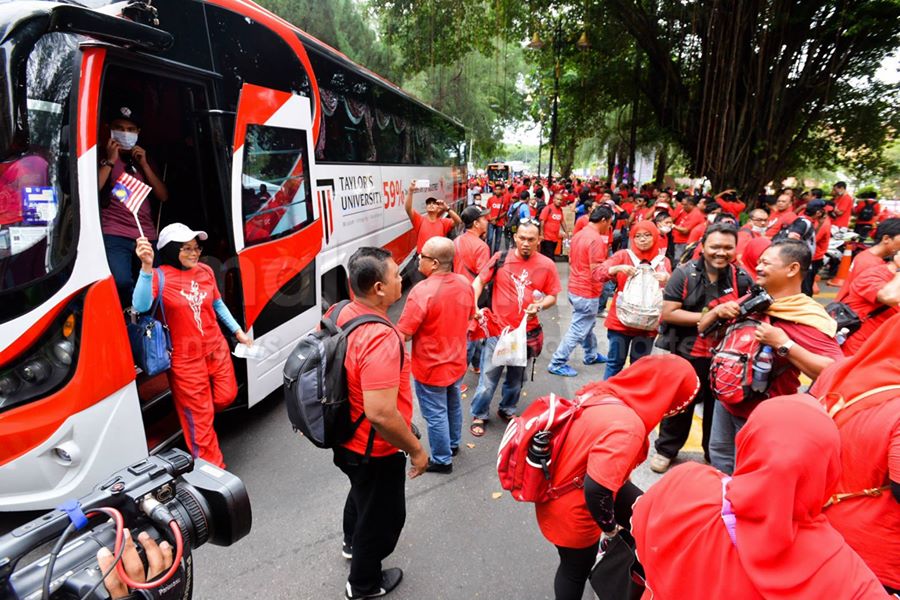 Pictures of a Taylor’s University Bus ferrying passengers to the Red Rally sparked outrage among Malaysian citizens. Concerned parents and youths expressed their appall at the image and Taylor’s association to the Red Rally.

Many are blaming Taylor’s for the action and assumed the university had their bus rented out for, well, money.

The university was under fire with negative comments, being accused of “accepting donations” and having parents threaten to boycott them.

But wait a minute, can we just really think about it?

Being associated to the Red Rally would do the university more harm than any bus rental could cover.

The high profile university quickly responded and provided clarity over the negative association.

The truth is, Taylor’s didn’t even know about the use of their bus until it was being circulated on social media.

It was learnt that the bus actually belonged to a bus company known as Wawasan Sutera and the bus was used without Taylor’s University’s knowledge nor consent.

“Taylor’s University has noted that our bus contracted to third party, Wawasan Sutera, was used by the operator to ferry passengers to the red rally today without our knowledge.

We would like to reiterate that the management of the university did not authorize the service of the bus for this purpose and the bus was not used to ferry our students to the rally.

Immediate action has been made to withdraw the use of the bus with our logo.

We regret the unintentional association of Taylor’s University with this event.” 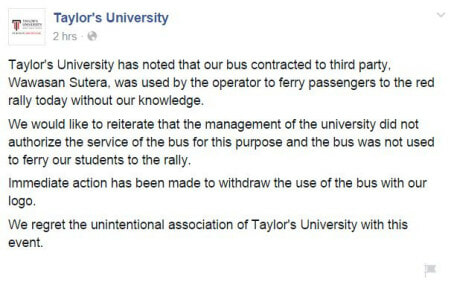 A couple hours later, Wawasan Sutera also issued an apology to the public and Taylor’s for their mismanagement.

Wawasan Sutera would like to extend our sincerest apologies to Taylor’s University. We are deeply saddened by the recent uproar regarding ferrying passengers to the rally in KL today using one of our bus with Taylor’s logo on it as Taylor’s have got nothing to do with the bus we provided today.

Though it was never our intention to offend anyone, we realized our oversight was totally disrespectful and caused the damage done to Taylor’s reputation. We have removed the bus from the scene and and we apologize once again for our oversight to Taylor’s University and any other parties who is affected and offended.” 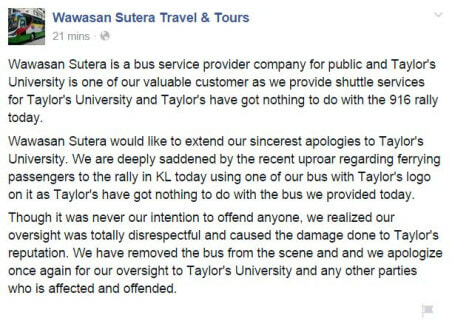 I don’t know about you, but seems like a pretty big blow for Taylor’s.