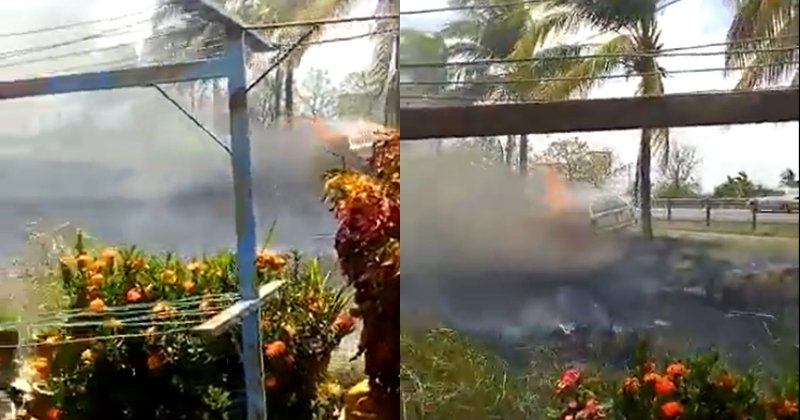 Situated beside a highway between Alor Star and Pendang, Kedah, one farmer recorded a sad scene as his paddy field and car was caught on fire.

The video of the burning which was caught on tape and shared on Facebook page Penang Kini, saw acres of a paddy field destroyed believed to be an act of sabotage by an unknown perpetrator.

The video which was coupled with the caption, “It is sad to hear the plea of this young farmer on what had happened to his field.”

In the video, he was heard saying that everything was burned down including his car.

“Here is my grandfather and he tried to put it out.”

Netizens who were in the area tweeted what they saw that day stating that when they were in the area the fire was already put out. Some even attributed the fire to a recent heatwave currently hitting the northern part of the Malaysian Peninsular.

“I saw this as I was making my way from Alor Star to Pendang. It has since been put out and a car at the side of the paddy field was also completely burnt.”

“I wonder who could have done such a thing. Spark a fire and because of the heatwave, it seemed unstoppable.”

We truly feel the pain of losing a part of our livelihood, but we can only imagine how it feels losing your only way of earning an income in the blink of an eye.

If it is true that the fire was caused by sabotage, let’s hope that the authorities will be able to capture the culprits responsible and be faced with swift justice.