Every so often, a horror story that combines the worst of those elements melt together and a story goes viral. And you know you’re in for a shocking roller-coaster of events when someone opens it up with:

“Betrayed. Cheated. Used. These were the feelings I had at the end of my negotiation process with members of my old team.”

Julian Ee, a programmer, recently came out into the open about his experience with GrabGas, a Malaysian-based startup that premised itself to be a “GrabTaxi for gas delivery”. In his blog post, he recounts his terrible tale, titling it “A Tale of Lies and Deceit”. And it truly is.

GrabGas started on Oct 2015, but like most startups, they had hit all time low after their tech guy did not deliver but only managed to only code a one page prototype. They needed to keep the ball moving so started to look around.

“From the outside, the team was very good at making it seem like they were doing good and making progress, but in reality, if you could see what I saw, there was really nothing concrete.”

“With no tech guy to build and no funding to pay for a developer, Jeson, Sean and Gabriel decided that they needed a new tech guy. This is where I come into the picture.”

Julian and Jeson were mutual friends and had met several times, and Jeson had invited to join GrabGas “as “one of the shareholders” (their words, not mine).”. 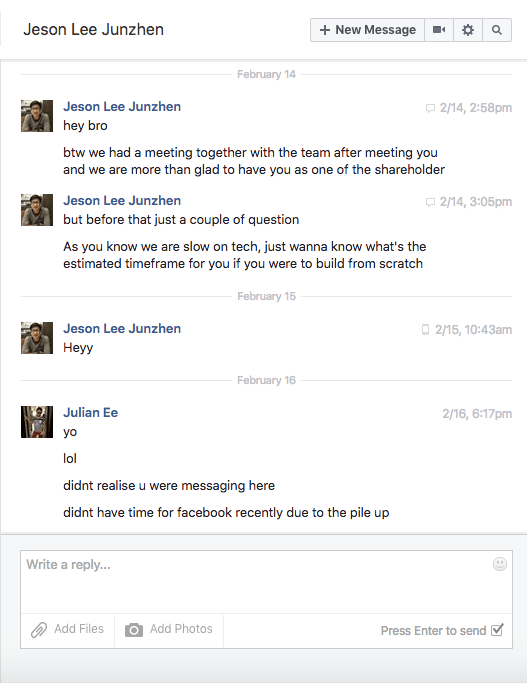 “One would have thought that this meant that there were other shareholders (like themselves) and I was being invited to join them as equals.”

Intrigued by their startup, Julian joined in late February and contributed to GrabGas.

“Within a month, I replaced the old prototype with a swanking new website and CMS. 2 months after that I delivered the updated website, CMS, API endpoints and the Driver App. We were finally ready to be “GrabTaxi for Gas” (More automation instead of our manual process).”

It was all rosy during the ‘honeymoon’ phase upon Julian joining the startup.

But soon, events started to take a sour turn as it slowly dawned upon Julian that he was not actually a ‘shareholder’. In fact, his mutual friend Jeson and the two other founders, had led him to believe in a farcical reality of things.

“And then in mid June, when the tech was mostly complete, I found out that Sean, Jeson and Gabriel had registered the company (Pte Ltd) without my name.”

“When I asked why isn’t my name there, they said that I was actually an early employee, that I had made an assumption that I was one of them.”

“This is where shit hits the fan.”

Julian got duped – and worse, there was no black and white, the company was wholly under their names and they did not include him. To makes matter worse, the company received Digi’s startup mentorship plus RM100,000 (thanks to Julian’s hardwork).

“Essentially when they said “join us as one of the shareholders”, what they actually meant was that they wanted me to work for them (a startup with no traction, revenue, funding or tech), as an early employee, for free (no salary) for an indeterminate period of time”

He recounted how he tried to negotiate with them, but they never budged.

Julian was forced into a corner, and it was one heck of an extremely unfair one. In essence, he had slaved away all his time and work assuming he was a shareholder, only to be slapped in the face with being an ’employee’ – and one that had to pay for the brunt of his own work!

Naturally, Julian left GrabGas and took all the tech and work he created for them. But it’s not just time and effort that had gone to waste. It was a friendship and the added grievances of being duped into a fantasy.

However, bad experiences teach one the most valuable of lessons, and this was no such exception. He expresses his gratitude for the overwhelming support from Malaysian netizens and explains that his blog post was his channel to move on and also to allow other people to learn from his mistakes which costed him a lot.

At the end of his articulate blog-post, Julian leaves behind words of wisdom which he hopes will be able to save others from these kind of situations:

1. Be extra careful when doing business with friends.

“I won’t advocate you to “Not do business with your friends.”, but I would recommend that if you ever do business with them, be sure of their character. And if you think you’re sure, be doubley sure. ”

“Outline roles, compensation and arrangements as clearly as possible and make sure that everyone is clear and agreeable to it.”

“This in fact, could be the one thing that saves your friendship in all those dark days we all have to walk.”

“It may be cliche, but “Action speaks truer than words.””

4. Don’t expect other people to think from your position and give you what you want.

“This is abit general, but there are times when you need to “apply pressure”.”

The company has kept quite mum and has only released a very diplomatic post on their Facebook page, saying they are open to “continue dialogue to find a solution if Julian is agreeable”. 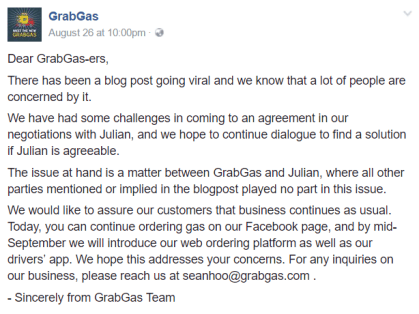 However, comments left by Facebook users beg differently, and have taken a stand for Julian.

Whatever this is, we agree with Facebook user Abang Pete: this is a sad case of poor business ethics.