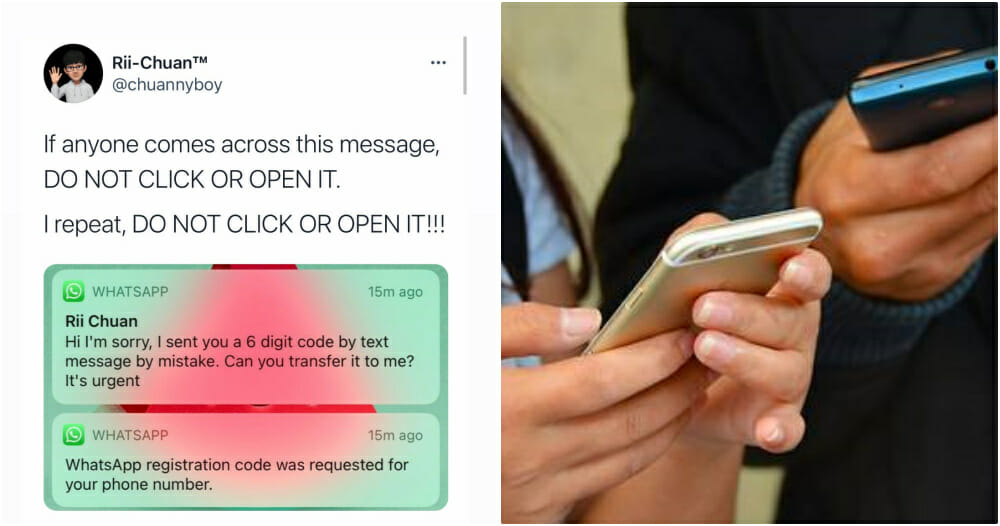 Scams that are becoming more prevalent and almost every day we hear something new.

Most recently, Twitter user Chuan recounted his experience of being exposed to a new online scam tactic.

If anyone comes across this message, DO NOT CLICK OR OPEN IT.

I repeat, DO NOT CLICK OR OPEN IT!!! pic.twitter.com/Poz3xL2Boi

It all started when he received the same message as the screenshot above from his university friend.

At first, he thought it was his friend and did not know it was a scam, that’s why he shared the 6 digit WhatsApp code without knowing that it was a fraud. After he shared the code, he was logged out of his WhatsApp account and asked to verify his number.

Shortly after, he received a call from the US, but to his surprise, the operator spoke in another language. He also said the call only went on for 30 seconds. After that, he had to wait 12 hours to get it back or the worse possibility was that his number would be banned from WhatsApp.

4. The call went on for 30 seconds and that's it
5. I requested for the code again and this happens pic.twitter.com/xQwmfnlDVQ

Apart from receiving messages to share the 6-digit-codes, he also received messages in Spanish that said:

Just to add on, I received this text too 🤷‍♂️ pic.twitter.com/VXhRQ8j4Nf

Chuan asks anyone with his phone number to delete or block it. He does not want his close acquaintances or family to be exposed to the same deceptive tactics.

Apart from that, another Twitter account named @ainailmii shared a screenshot of her WhatsApp group and said her friend was also a victim of the same scam tactic. What’s even sadder is that her friend used that number for online business and learning. As a result of being hacked, her friend may lose all the university and customer data.

The screenshot shows that the scammer tried to ask for a code in the WhatsApp group, then one of them reprimanded him by saying:

“It’s not good to hack someone’s phone like this, I will report to the police”

“I’m sorry, maybe her numbers were hacked, usually people who do business online always experience a situation like this. Their phone numbers being imitated, everyone please delete the message from your WhatsApp okay, it’s not nice”

Some netizens on the thread suggested how Chuan can get his account back by securing his account and setting up the two-step verification. Meanwhile, one of them said that he may need to wait up until seven days before he can get it back.

Whatever happens, we hope Chuan can get his account back and we would like to advise everyone out there to always be careful and wary of these scam tactics.