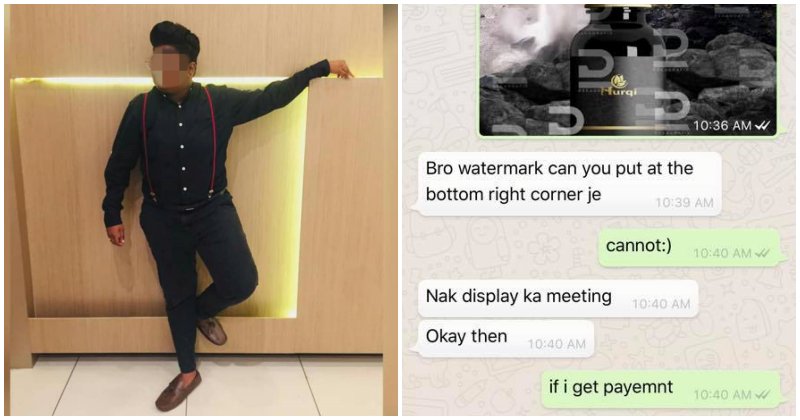 The life of creatives are pretty tough. The moment hearing that your brilliant idea or work is stolen is heart crushing – worse is when you can do nothing about it!

Netizen Taufiq Salleh took to Facebook to share the story of a conman who tricked him to do designs for a product, only to find out later that his ideas were stolen and redesigned by the thief!

In his status, he writes how he was approached by the conman asking him to create three designs that his ‘boss’ urgently needed.

“Last Thursday I was approached by this guy on Whatsapp asking me to create urgent designs, promising that he will pay no matter the price.”

“After asking for a deposit which was later promised once his boss approves of the design, I proceeded to put a watermark on not three but ten designs because that is how I work.”

“After approving the work done, he told me that he would make the payment on Monday promising that a cheque would be provided.”

The con then proceeded to ask him on Sunday with regards to the designs to be submitted without the watermark, promising more work on the same day.

“He told me that his boss wants the design to which I responded saying ‘no payment, no file’.”

“He pushed me in saying that there is another job to be done at 2pm the same day, and despite my refusal, I did it anyway. This is what you get for being a nice person.”

Promising to pay RM2,400 for Taufiq’s website design, label, and poster in the limited time frame, he sensed foul play when payment was not paid.

As a result, Taufiq has not received any payment from the promised date to this day!

Suspicious, Taufiq proceeded to text the conman’s customer only to find out that the con sold his website design, label and poster to another client for only RM500!

“I texted this akak who dealt with him (the conman) only to find out that he was charging RM500 for the materials when I charged him RM2,400 for the design work.”

“He even had the cheek to show off a website that belongs to a friend of mine’s, and claiming that it is his.”

Wanting to teach the conman a lesson, Taufiq began viral-ing the conman’s Facebook profile and the discussion he had to ensure that payment is made. Don’t mess with people and the internet yo! 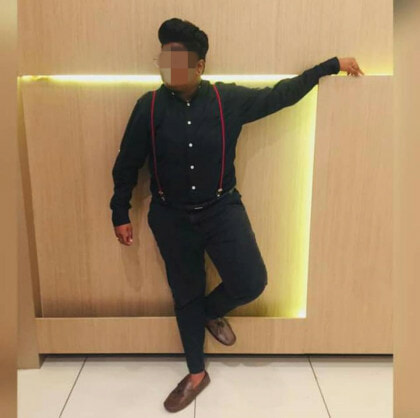 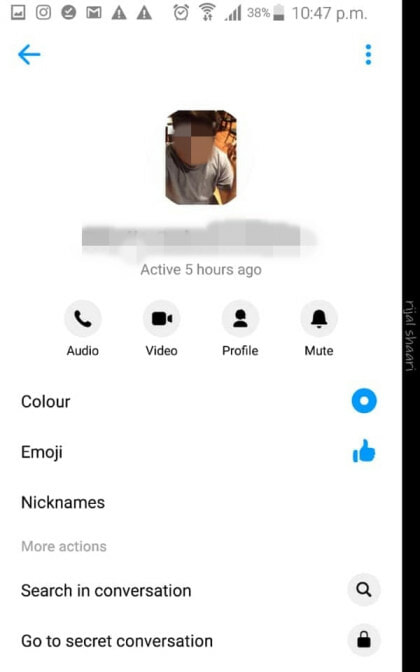 In the end, Taufiq understood that the conman was nothing more than someone who did freelance work and did not work for a company as mentioned earlier.

Wanting to teach the con a lesson, Taufiq mentions that he will take down his post once payment is made and urge other designers to be wary of this individual in the future.

We urge designers out there to be wary of cons trying to make a quick buck from your hard-earned work. 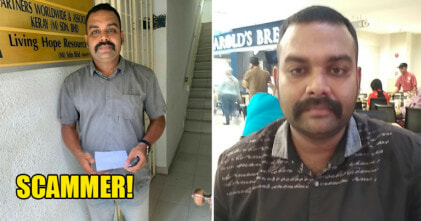