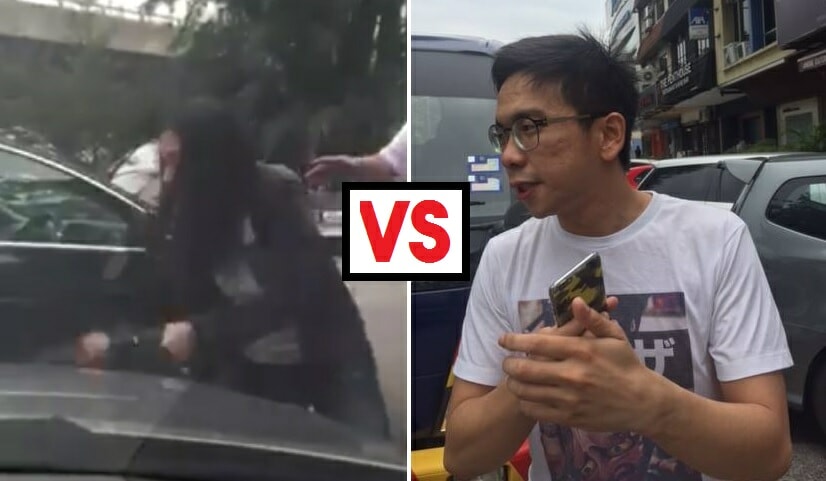 On 28th of October 2015 at approximately 10.30am, a dispute between two people over a paid parking lot blew out of proportions and quickly went viral.

Shasha Farina was arguing with Cheah Jenq Yeh after he parked in her paid parking and retaliated aggressively.

“We had a reserved parking spot in which is marked in red with a sign that says Sewa Khas and even with a cone to says that it is a paid parking lot.

When I came to work at 8.45am in the morning, I noticed that my reserved lot was parked by a Grey colour Toyota Camry with the number plate WPX8803. Since he was parked in myplace, I had double parked over my spot and called up MPSJ so that his car could be towed away.

And before I could even go out to move my car, he reversed and hit my car straight on! Leaving a dent on my rear door. My father had tried to talk to the arrogant idiot through the driver’s side window telling him why did you do that when clearly this could have been solved by saying sorry and being patient while I come out and move my car.

He instead utter profanities to my father who is 67 years of age, and pushed him off balance in which he has accidentally knocked the Camry’s side mirror. The arrogant idiot then said ‘You don’t know who I am and you don’t know what I can do’ and immediately winds up his window puts his car in reverse and hit my car two more times!”

Shasha was enraged at the situation and was recorded to be on “super Saiyan” mode. She defended by saying that Cheah not only parked in her spot but has cause damage to her car and pushed her father off balance.

She added that the authorities have been no help to the incident whereby the first police car that arrived told her to just make a report for an accident when they had clearly explained to him that it was not an accident at all.

Both parties were charged under Section 427 for hitting each other’s car. Cheah was granted an RM3,000 bail while Shasha’s bail was set at RM3,500.