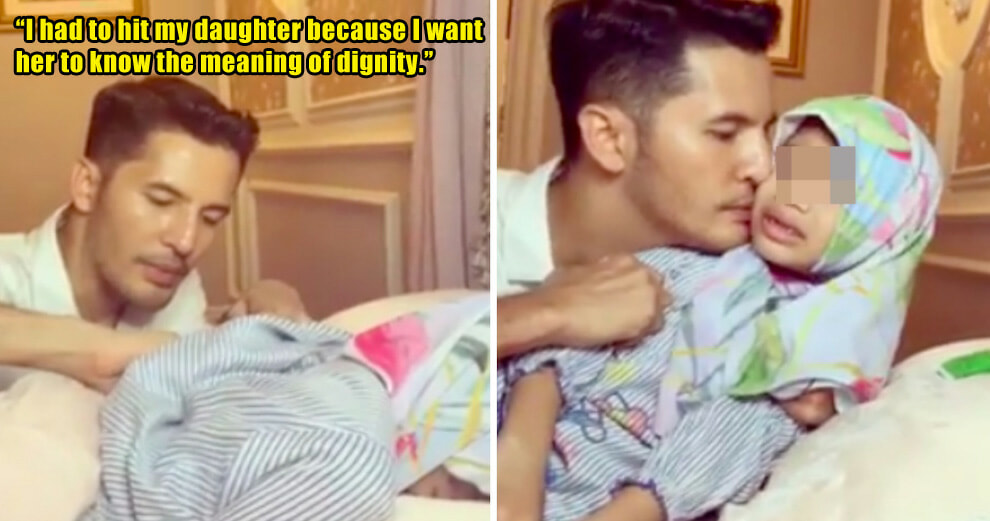 Last Wednesday (24th April), Malaysians were alarmed when Malaysian celebrity millionaire and businessman Datuk Aliff Syukri uploaded a video of himself rubbing what appears to be ointment on his 9-year-old daughter’s back. She reportedly had wounds from being beaten by her father as a punishment for not wearing her hijab.

In the video, which was uploaded to his Instagram account, the daughter clearly appears distressed and in a lot of pain from the wounds, while Syukri consoles her.

A post shared by Ohabangkosmetik (@aliffsyukriterlajaklaris) on Apr 24, 2019 at 6:51am PDT

The caption explains that the girl removed her hijab in front of an unknown man. An excerpt from his post reads,

“Today, I had to hit her with a cane because I wanted her to understand the meaning of a girl’s dignity. She has a habit of suddenly removing her tudung in front of unknown men.”

“Maybe she doesn’t understand because she’s still so young, but I need to educate her about why she has to protect her aurat.”

“I want my daughter to be good, religious, and know how to preserve her honour. I hope she learns from her mistakes.”

The post received a lot of backlash from Malaysian netizens, with many accusing Syukri of child abuse for beating her to the point of her sustaining painful injuries.

U have posted this in your social media, thus this has come to our awareness that u have been abusing your child physically and emotionally.

I know that this is your child and it’s your rights on how u wish to discipline your child. pic.twitter.com/33ZfCp8ZrH

I know this is attention seeking but this act must be condemned. Ramai lak komen menyokong. pic.twitter.com/puI6rxPesP

The issue about local hypocrite, Aliff Syukri physically abuse his daughter for not wearing a hijab in front of men, then post a video online of him applying ointment on her bruises, saying he did this for her sake is one of the horrendous thing a father could do to their kid. pic.twitter.com/vDBRpoh99x

Others also pointed out that this was not the first time Aliff Syukri did something like this.

It was brought to my attention that apparently this isn't the first time that Dato Aliff Syukri has done this. The poor girl is being humiliated for all to see. pic.twitter.com/qbtQqhGKtn

In light of the outrage online, a local non-governmental organisation (NGO) called the Child Rights Coalition Malaysia (CRCM) filed a police report against the businessman. According to The Star, the CRCM issued a statement confirming that they made the police report against Aliff Syukri and expressed they were extremely disturbed by his actions. An excerpt from their statement reads,

“Datuk Aliff Syukri proclaimed on social media that he caned his daughter because she removed her hijab in front of an unknown man.”

“He publicly humiliated his child online by video recording himself applying medication to her wounded back while she appeared to be in distress, and uploaded the footage on his Instagram for his 3.1 million followers.”

The CRCM also pointed out that this was in violation of Section 31 of the Child Act 2001, as well as the Domestic Violence Act and the United Nations Convention on the Rights of the Child which Malaysia acceded to in 1995. The NGO also called for the police and the Department of Welfare to “investigate the matter and charge Datuk Syukri appropriately for his violations of existing laws.”

We hope that the authorities investigate this matter thoroughly and ensure that the wellbeing of the child is made the utmost priority throughout the investigation process. 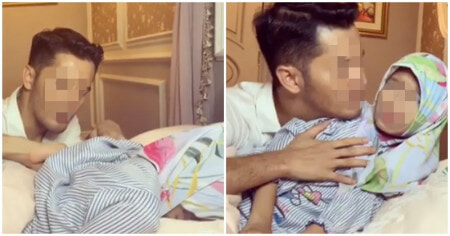