A school from Cheras recently went viral as they received backlash for banning an event.

Recently, there have been many funny anime-related events taking place around the globe. These events will usually be an activity based on something special from a specific anime.

For example, there’s the ‘Scream like Goku’ event. Goku is the main character from the anime Dragon Ball.

He is famous for screaming ‘Kamehameha’, which is the name of his special move where he will form a glowing blue ball of energy and direct that energy at his enemies to destroy them.

Well, recently, there’s another viral event in Malaysia, which is the ‘Run Like Naruto’ event. Naruto is the main character of the anime with the same name.

One of the many unique things about this anime is how the ninjas run. When running at high speed, the ninjas would let their arms ‘flow’ behind them.

As always, the location of these events are pretty random. Some Malaysians have previously planned this running event in Sunway Pyramid, which took place on August 19 and 20, 2017.

Of course, the event was made as a joke but people actually turned up and started running around like the ninjas in the anime!

Many people had fun singing and dancing along to the soundtracks of the show and even held onto glow sticks as they ran.

However, it seems like the ‘Run Like Naruto’ event was planned at a secondary school in Cheras and the school board took action very quickly!

The event was supposed to take place on September 5, 2017 right after the long holiday in the school compound itself but according to some netizens, the even was supposed to be a joke.

The school decided to post a warning on their Facebook page, saying that it wasn’t their official event and that students should not take part in it.

They warned, “For the information of all students, the ‘Run Like Naruto’ FB page is NOT organised by the school.”

“Action will be taken against students taking part in the event in school as the school has not approved the event.” 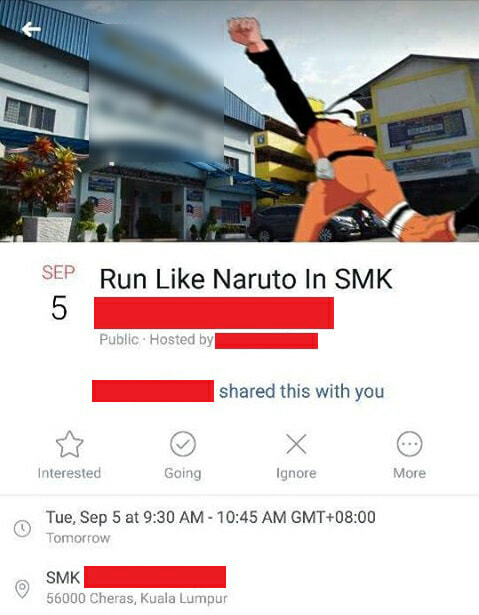 Many students, alumnus and even people who aren’t associated with the school went on to slam them for taking it seriously in the first place.

One student from that school wrote,

“Is the school board serious? Are you telling me running is against the rules? And who runs like Naruto anyways? Y’all can’t take a joke.”

While there were a lot of backlash on the school. A few netizens however mentioned that the school did a good job because people may actually get hurt.

Well, anyways, if you are still interested in joining funny events such as this, there are several ones happening around the Klang Valley.

An upcoming event is the ‘Punch Air Like Saitama at Desa Park City‘. It will take place in Desa Park City as mentioned on September 9, 2017 at 6.30pm onwards.

Also read: Someone Did It. There’s a ‘Scream Like Goku’ Event Happening in KL 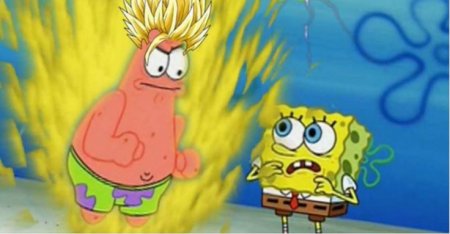