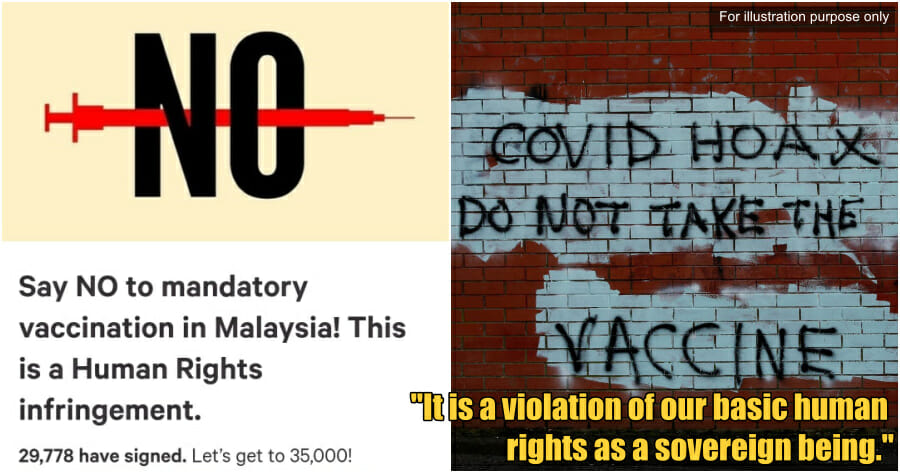 “Let’s put our foot down and declare that we cannot & must never accept mandatory vaccination. It is a violation of our basic human rights as a sovereign being.”

Prior to his resignation, former Prime Minister Tan Sri Muhyiddin Yassin had recently announced that action would be taken against anti-vaxxers in the coming future.

According to him, the government would first observe why these groups of people refuse to register for the vaccines and then consider making vaccination mandatory under existing legal provisions.

But an online petition against mandatory vaccinations has been gaining traction and is in the midst of getting 30,000 signatures since its inception two months ago. 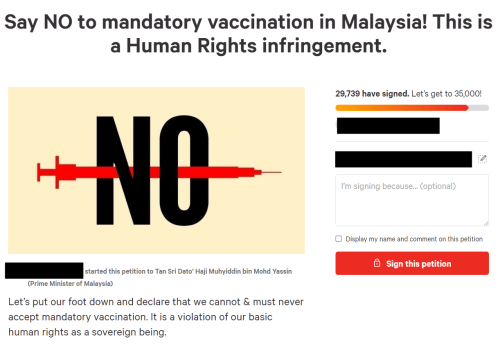 The description of the petition says, “Let’s put our foot down and declare that we cannot & must never accept mandatory vaccination. It is a violation of our basic human rights as a sovereign being.”

“Our resistance is based upon present scientific facts, differing opinions and constructive criticisms.”

“Any mandatory vaccination attempts will also violate the Nuremberg Code of 1947, which is a set of international laws drafted to advocate ethical principles for human experimentation. Penal Code Section 97 of the Code restricts the application of experimental medicines upon a non-consensual human,” it said. 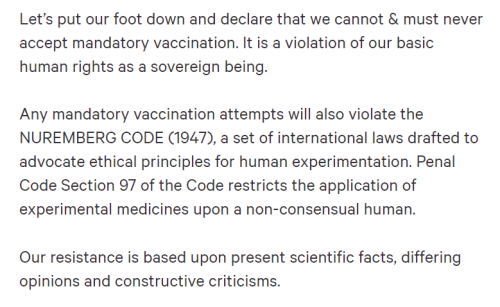 The petition also listed three points as for the reasons why the “Rakyat, will never agree to any form of the mandatory ruling concerning vaccines.” 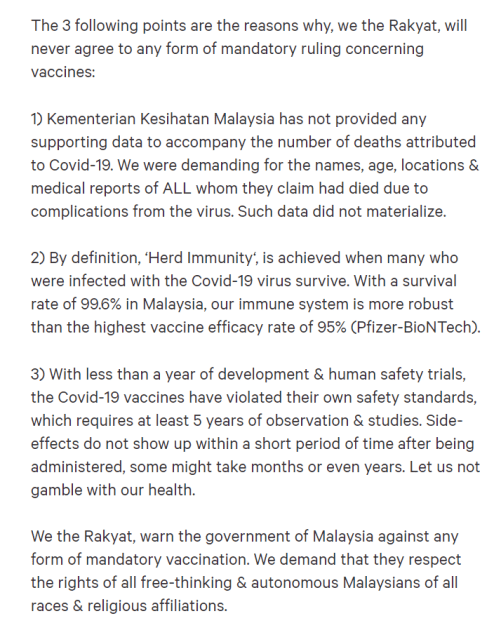 The Nuremberg Code and Covid-19 vaccines

The petition’s existence hinges upon the use of the Nuremberg Code of 1947 which was created following the trial of a group of Nazi doctors accused of conducting inhumane and often deadly experiments on prisoners of concentration camps without their consent.

The Nuremberg Code consists of 10 principles that were developed in response to the horrors of this experimentation, with the aim of protecting human subjects in medical research and particularly emphasises informed consent. 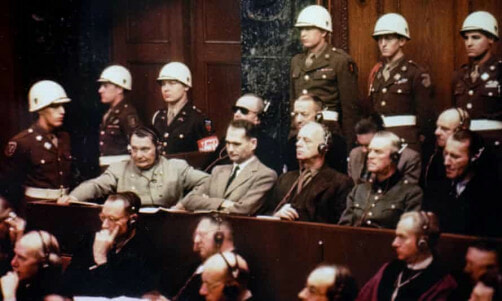 Firstly, the Nuremberg Code clearly addresses the ethics around human experimentation and no approved vaccines. The Nuremberg Code was developed in response to medical experiments conducted on prisoners by Nazi doctors during the Holocaust. Vaccines are not mentioned anywhere in the code.

Anti-vax petitions and groups claim that Covid-19 vaccines violate the Nuremberg Code because they are somehow “experimental”, but is simply not true as each vaccine has been approved by the National Pharmaceutical Regulatory Agency (NPRA). 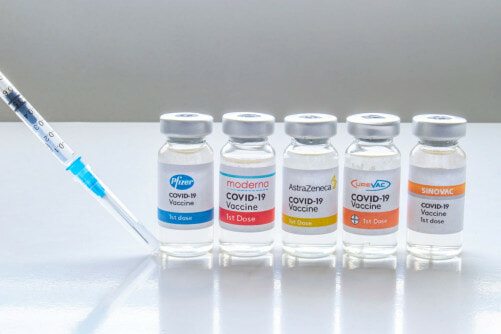 This is backed up by a lecturer in social epidemiology and the sociology of health at Aston University, Birmingham, Dr Alexis Paton who told Full Fact that the Nuremberg Code is “very specifically about experimentation” and so although its principles would be applicable when discussing clinical vaccine trials, it is no longer relevant once a vaccine has been authorised.

“The Nuremberg Code is about the active experimentation on humans, for the most part during some sort of clinical trial of some description. So when we talk about the vaccines, we’re out of the auspices of the Nuremberg Code because this is a product that has been trialled, with appropriate ethics in place, and has been approved and is now in production and being used globally.”

Professor Emma Cave, professor of healthcare law at Durham University also added that “The Code isn’t and wasn’t legally binding. It’s not legally enforceable, it’s a guideline rather than law.”

The spread of misinformation

Fact check websites across the globe in countries such as Canada, the UK, the US and Australia have debunked this notion multiple times yet the beliefs of anti-vaxxers remain the same.

A Facebook user who was found promoting the petition was recently brought to our attention. In the comments, the anti-vaxxer proceeded to have a debate with another user in regards to vaccination in Malaysia. 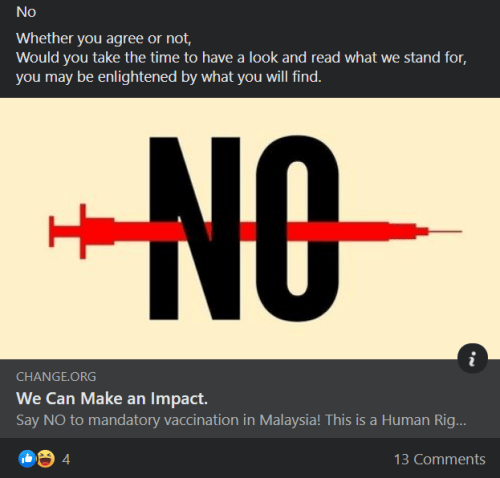 One Facebook user proceeded to debate the points raised in the petition on why mandatory vaccinations should not be allowed. The first point the user raised was that “It is an infringement of rights to reveal the names and details of those who died.”

Another point he raised is that the monitoring of long term side effects is difficult as there is simply not enough time. “I’m part of the team involved in the monitoring for side effects of Covid vaccines and I haven’t seen any life-threatening effects from it. Many of the side effects that developed aren’t as deadly as being infected itself,” the user said.

“If you haven’t been on the battlefield firsthand nor have the knowledge required, I don’t think you should tell others what to do without knowing the repercussion of your action.”

“We’ve held the hands of those like you who refuse vaccine on similar grounds, dying as they breathe their last breath, regretting, crying & begging for the vaccine and dying without their families being there to be with them on their final moments.”

The netizen further added, “Our healthcare system has collapsed and unless people would like to volunteer and risk their lives to help out, this kind of post will cause greater damage to those risking their lives trying so hard to save others and the public.” 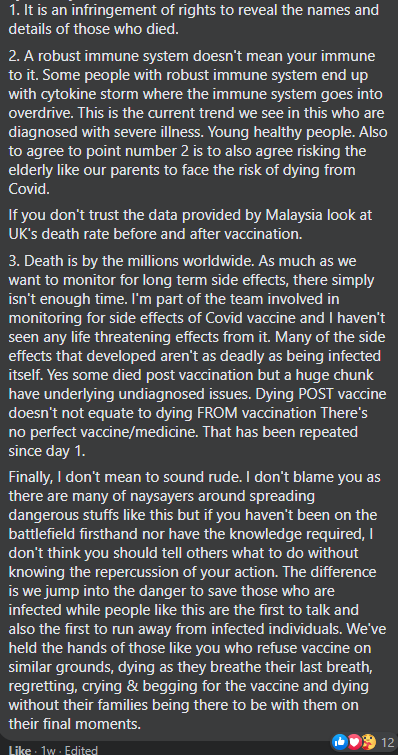 Another Facebook user commended the initial comments and said that” Vaccines, in my opinion, are not a freedom of choice issue. They’re a public health issue.”

“Only commenting on this because, this could encouraged something that may very well cause more damage. And honestly, I don’t think Malaysian can and should deal with more right now.”

Let us all make informed decisions on what’s good for us. But let’s not forget the repercussions and consequences of what our actions could possibly bring. What do you think of this? Let us know in the comments below! 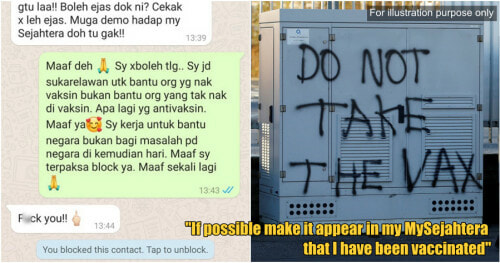