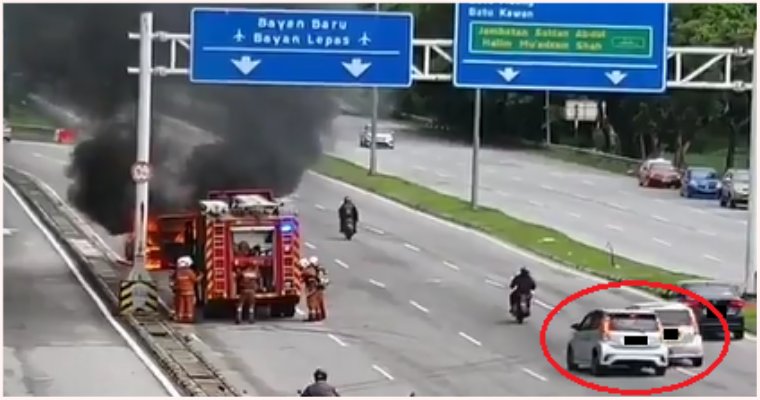 The Myvis are at it again!

Myvi drivers in Malaysia had it bad considering they have a reputation of being reckless, and this incident is definitely not helping their case.

Toon Seri Anthraxxxx (@anthraxxxx) took to his Twitter profile to showcase footage of an accident between two Myvis on a highway. What’s even crazier is that it happened literally right next to where our brothers and sisters from the fire department were putting out a fire.

In the video, the first Myvi can be seen driving in between two lanes before completely stopping in the middle of the road for some reason. A second Myvi then comes up behind it before slamming into it.

Netizens quickly took to his thread to share their opinions as to why the accident happened. Some blamed the first Myvi, saying that the driver was probably distracted by the fire happening at the most left lane, while others pin pointed that the second Myvi could be at fault as the driver probably was not paying attention as well.

This comment goes, “This shows that stupid people are the cause of accidents on the road. There’s a car on fire, you just keep going. You stopped there, it’s not like you’re going to put out the fire. I hate it the most when there’s an accident or something and busybodies try to watch. That’s what you get.”

This comment says, “He was trying to avoid passing by the burning car. Which could explode. So, he’s not stupid. The one at fault is the Myvi behind him because he wasn’t alert to notice a car braking in front of him.”

This comment goes, “It’s the first Myvi’s fault for stopping in the middle of the road. The second Myvi that hit him from the back isn’t at fault at all, it’s his lane.”

This comment says, “But the second Myvi hit him from the back, it’s still his fault. That’s just how it is.”

This comment goes, “The first Myvi was stuck between the motorbike and the black car, so he got confused as to whether to go left or right, so he decided to slow down. Plus, the second Myvi was going insanely fast.”

All the netizens gave considerably valid and compelling points, hence what are your thoughts?

But one thing’s for certain, Myvis definitely have some bad luck following them.

Who do you think is at fault? Let us know in the comment section.