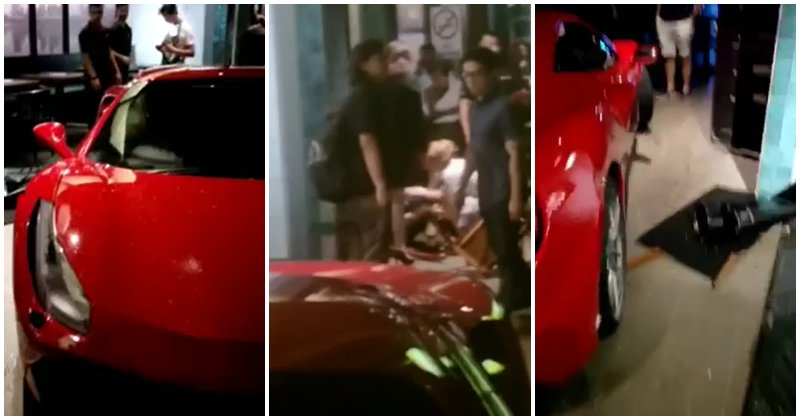 Just last night (28 March), a red Ferrari crashed into Plaza Batai, Damansara Heights and it obviously caused quite a commotion.

The car that almost crashed into a restaurant bar there was seen perched on the walkway of Jalan Batai. Shards of glass were littered on the floor, while chunks of wood from the bench were strewn about. One lady was even injured, with her right eye bleeding.

Check out the clip below:

Amanda, who was at the scene at the time, shared with WORLD OF BUZZ,

“It was about 8.30pm and then this car drove past me. I told my friend, ‘Who even drives cars like this in Malaysia?’ because of all the potholes we have here.”

“As we go around the corner of Ben’s towards Yellow Brick Road, there was already a commotion. Literally under 1 minute.”

Amanda said that when she got there, the driver was already no where in sight.

“Some people said that the driver ran away probably because he was embarrassed.”

It was speculated by passersby at the scene that the man was drunk but there are no confirmations about this.

She added that a lady was injured as her right eye was bleeding. It was uncertain whether it was caused by the car hitting her or if it was the result of objects hitting her from the crash.

“The car hit a bench and a bin that was there. The front bumper was hit, and the airbags were out.”

“I couldn’t shake off the feeling that it could’ve been me getting hit when I passed by.”

According to MSN, the Ferrari which was being parked suddenly accelerated forward towards the bar. This sent diners scrambling to get out of harm’s way.

[Update]: According to The Star, it is said that the Ferrari owner was a regular customer there and the car was later driven away.

Yikes! We hope no one else got hurt during this incident last night. Remember guys, don’t drink and drive – it’s against the law and you’re endangering the lives of others besides your own! 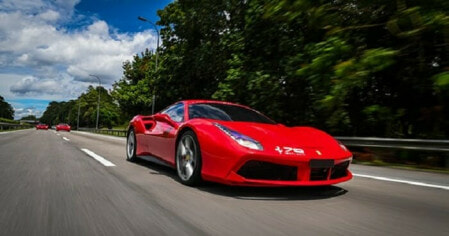