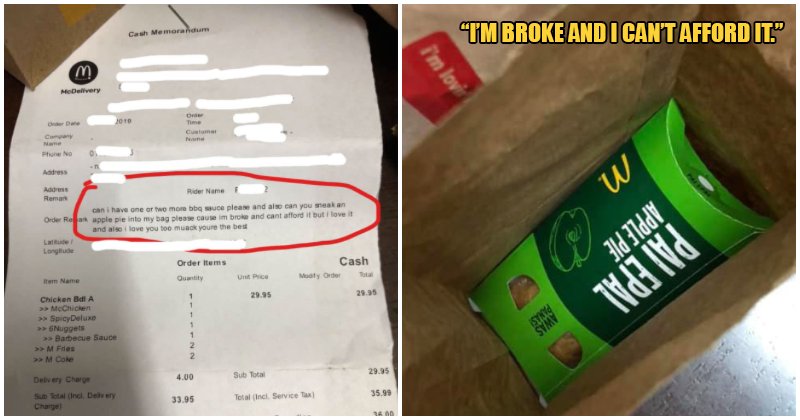 We’ve all been (and probably still are) that kid that’s broke and hungry most of the time, probably after spending our money on unnecessary things. In being that kid also comes the sense of no shame every once in a while, especially when it comes to food.

And by having no shame means to either go above and beyond for those free extra nuggets or at least doing the bare minimum by putting in a request while playing emotional mind games.

This Malaysian decided to go the latter route and managed to acquire his complimentary apple pie from the kind McDonald’s employee that received his order request. In a now viral Facebook posting, Luiv Tee showcases the receipt of his order detailing his special request as well as the prized apple pie.

He captions the posting with, “I love Mcdelivery, you’re the best!”

His special request goes, “Can I have one or two more barbecue sauces please and also, if you can please sneak an apple pie into my bag? Because I’m broke and can’t afford it but I love it and also, I love you too *kisses* You’re the best.”

Lo and behold, when his order arrived, right at the bottom of the paper bag was the stowaway apple pie.

Luiv also took to the comments section to explain that this method only works by using McDonald’s own delivery service though don’t expect to receive any freebies from McDonald’s anytime soon as not only did Luiv not get his extra barbecue sauces but unsuspecting McDonald’s staff may get overwhelmed with the sudden influx of special requests for freebies following Luiv’s posting.

Luiv’s posting has since garnered over 2,500 shares.

If I were to send in a request like that but with double the kisses and ‘I love you’s’, I’d still receive less than what I ordered. 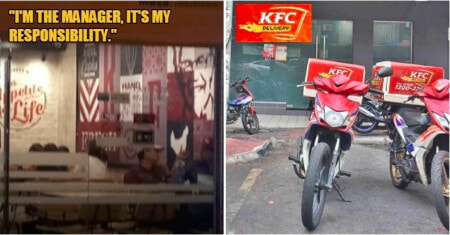