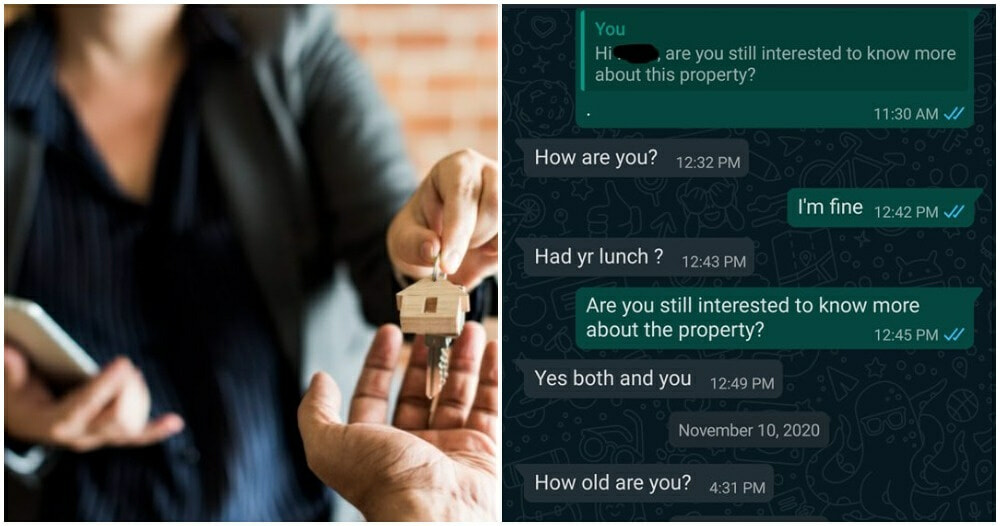 Recently, a female property consultant, Megan Khoo, took to her Facebook to share the difficulties she has faced as a woman who works in property sales. Based on the many encounters she has had with male clients, many of them tend to make sexual remarks towards her and question whether it is easy for women who are in sales.

In her post, Megan pointed out the common stereotype that many would have heard of how it should be easier for women who are doing sales.

“I believe a lot of people have the same bias that is: “It’s easier for girls to make sales!” or “Those customers prefer to buy with girls!” I’ve really heard too many people say this.” 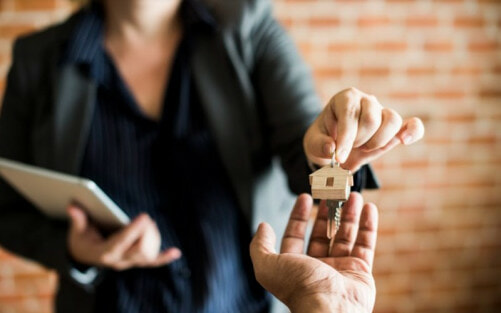 “Instead, I am often harassed. Moreover, this does not just happen to me but also my female colleagues. My friends around me know that I often get harassment messages from male customers.”

Megan then shared screenshots of the many conversations she had with male clients who have attempted to flirt with her or have made sexual remarks towards her. 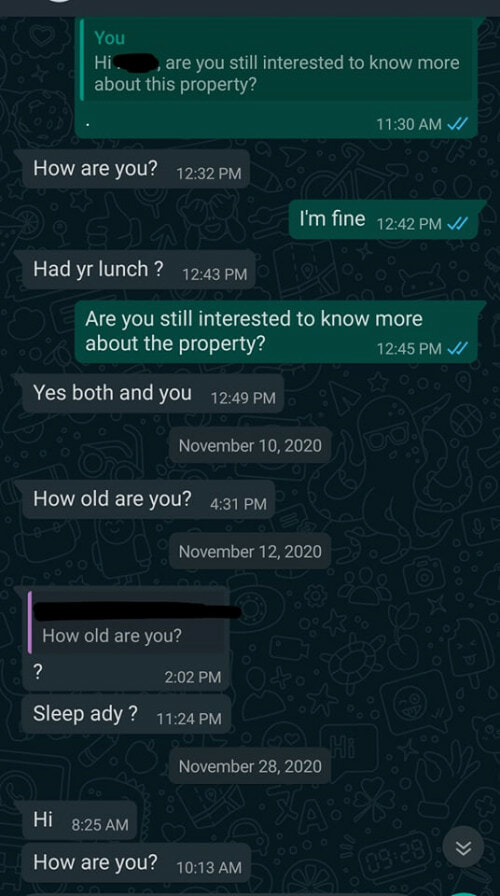 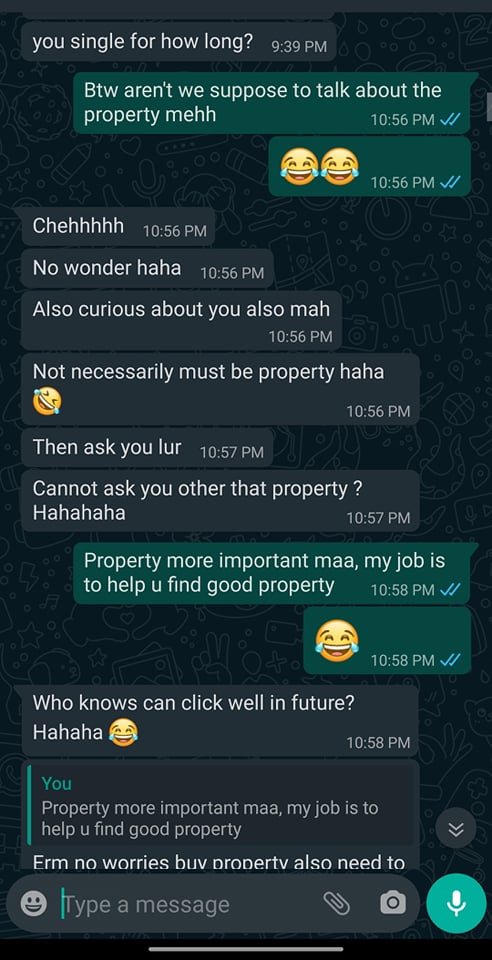 Once, a male client allegedly flirted with her by “jokingly” telling her he would rather consider her than considering the company. Here’s the translation of their messages:

Megan: Hi, may I know if you’re interested in knowing about our company? If you are, I’ll arrange a time for you to meet and talk.

Megan: How can you consider when you haven’t even understood the company’s model?

Client: The problem of cost (Chinese slang of saying they have financial issues)

Client: How’s your company policy? Will consider you, too pretty. Just joking. Don’t be angry. 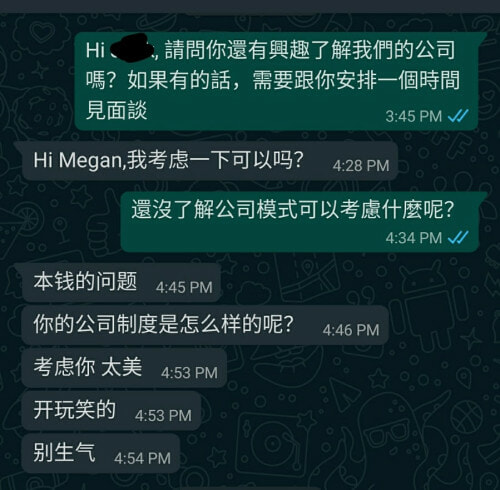 Here are some other similar incidents that Megan has encountered. 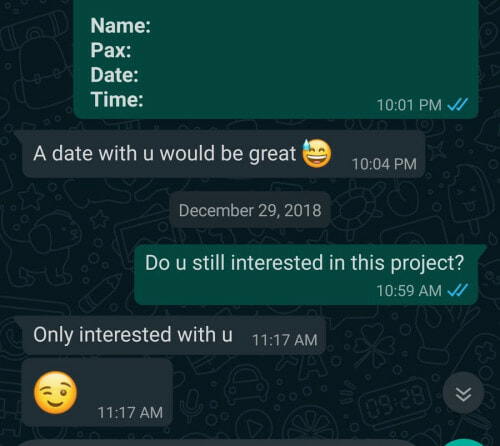 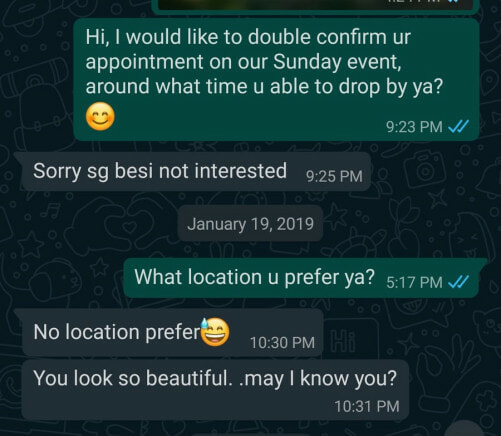 In another incident, a potential male client sent a photo to her asking if it was Megan. When she said no, he then rudely replied to her saying he wouldn’t be interested. 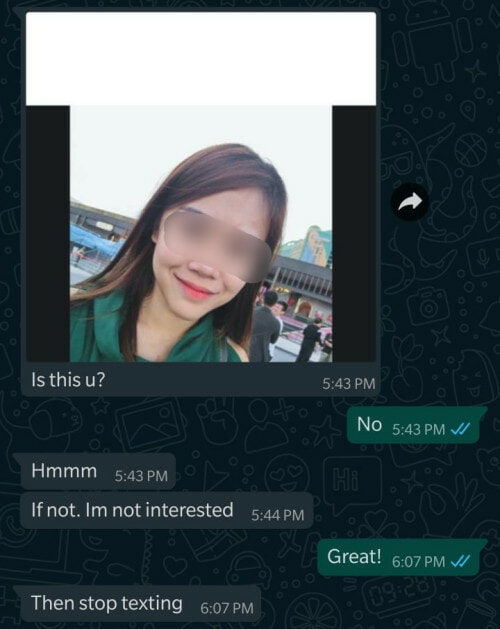 Megan hopes to see a change for women, especially those who are working tirelessly to close sales.

“Should we “get used to it”? Should we just laugh? Society is sick and I have long accepted this reality, but I still hope that this society can be more respectful, polite, with fewer insults and less demeaning remarks,” she wrote in her post.

“In fact, we are only selling houses, and we are not selling ourselves. No matter male or female, everyone is human. They have hands, feet, and brains. Treat everyone fairly.” 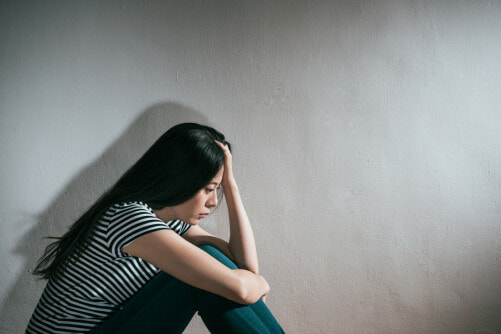 She’s not the only one

According to Human Rights Pulse, The Federal Court, Malaysia’s highest court, ruled in 2016 that sexual harassment is a civil wrong, allowing victims to sue their harassers.

Despite these changes, it has been reported that 36% of Malaysian women have suffered sexual harassment in the workplace, according to a YouGov survey. A survey by the Women’s Aid Organisation (WAO) put the figure as high as 62%.

It is time to make the world a safer place for women.

If you are a victim of sexual harassment or abuse, please reach out to AWAM by clicking here or calling 03-7877-0224.