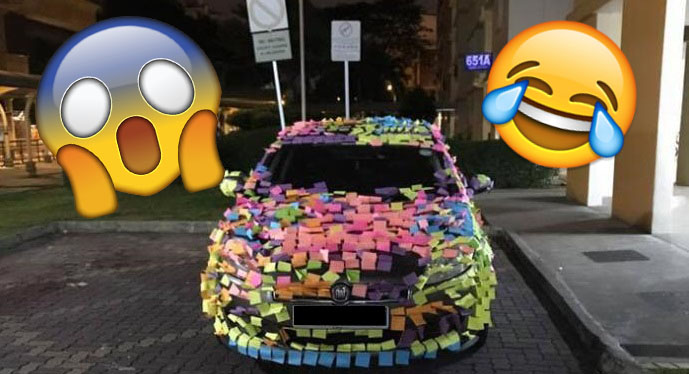 Malaysians are known to be sinners when it comes to parking our cars. We would illegally park, double park, and even triple park! 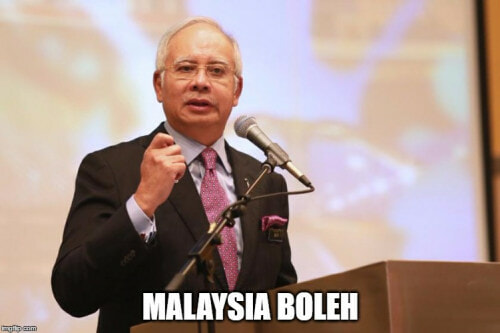 Sometimes we have no choice but to do this because there just aren’t enough parking lots available. But the real sinners are the ones who don’t leave their phone numbers when double or triple parking.

In Singapore it is completely different thing. Over there, they take parking offences VERY seriously!

STOMP reported two videos which went viral on Facebook depicting a car being tremendously trolled by unknown citizens. Audrey Wee had shared those footage online but did not mention the exact location. 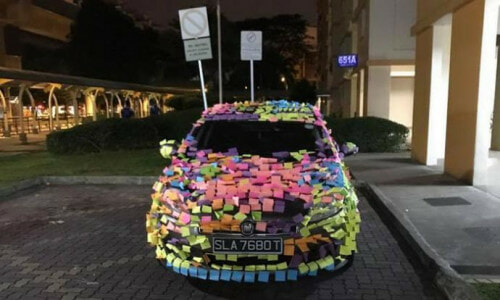 The car had clearly parked right in front of a sign which read ‘NO PARKING’.

The vehicle was also hilariously covered by rainbow sticky notes!

A second video showed the car hurriedly driving away.

Many netizens felt like it was a lesson well taught for those who park their cars illegally.

“There you go. If the police aren’t quick enough to summon the car then WE will help punish! Good idea to teach people not to anyhow park like their grandfather’s road.”

Some even went as far as to demand for more damages inflicted upon the car!

“Should go natural. Should have some dog and cat poo throw or place on this car or mash those poo then paste on the car.”

Wah, you guys need to lighten up just a bit…

But Audrey later suggested that the incident could just be a prank by a group of friends.

Regardless of it being a prank or not, the video definitely does give us some great ideas on what to do next time we encounter a similar situation 😉