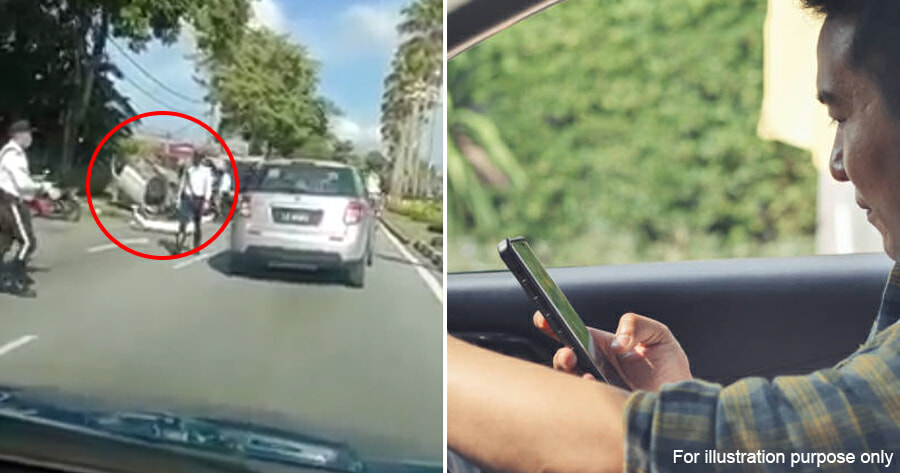 A traffic jam usually happens as a result of an accident, not so much because there is an obstruction on the road, but because of certain drivers who want to catch a glimpse of the accident scene. This even happens on the opposite lane because some Malaysians are just very ‘kepoci‘ (busybody).

It’s also common for these drivers to whip out their phones to take a picture or video while passing through, but aren’t they forgetting that using their phones while driving is illegal?

One Malaysian driver was unfortunate enough to be in this situation and was fined for using his phone because he was taking a video of an accident scene.

In a video posted on Info Roadblock JPJ/POLIS, the person who was recording the video is seen driving past a car that had turned turtle. Several police officers were seen controlling the situation with some directing traffic and others tending to the crash victims.

“Terbalik geng, (upside down gang)” the driver said, referring to the car that had overturned.

As he continued to drive through the crash site, he placed his phone down while it was still recording, probably trying to hide it from the police officer.

However, it was too late as the officer already noticed it and told his fellow officer to ‘saman’  him.

Translation: “Fine him, he’s playing his phone. Call him (to the side) first.”

The driver can then be heard turning on his signal lights.

According to Rule 17A, LN166/59 of the Road Traffic Rules 1959, using your phone while driving a vehicle is considered a serious offence, and violators of this act will be required to attend a court hearing.

Also read: Watch: Motorcyclist in KL ‘Zig-Zags’ Between Traffic, Gets Angry When Car Knocks Him 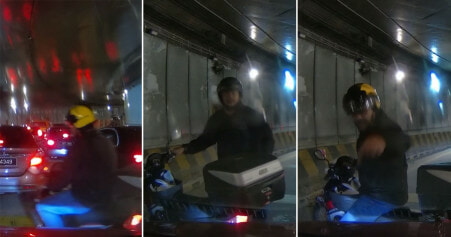