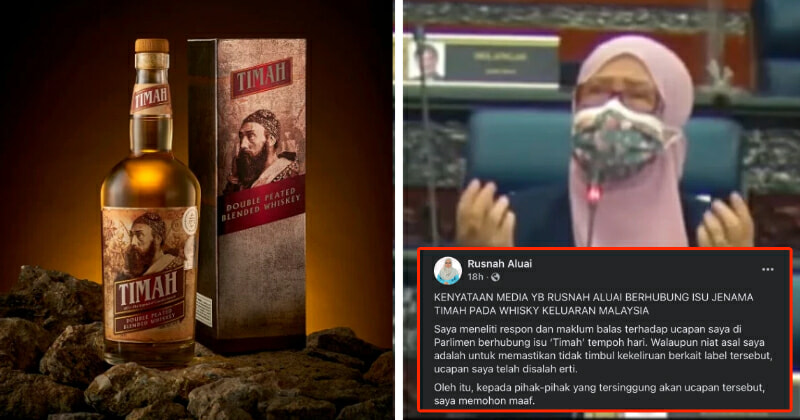 Following her controversial statement in the Dewan Rakyat two days ago (28 October 2021), the Member of Parliament (MP) for Tangga Batu, Rusnah Aluai has issued an apology on her official social media accounts for her remark which likened drinking the Malaysian-made TIMAH Brand whiskey to ‘drinking a Malay woman’. Furthermore, Rusnah also claimed that her intention on the remark was misunderstood by the public.

In an official statement issued on both her Facebook and Twitter accounts, the PKR MP said that she had carefully scrutinised the various responses and feedback to her remarks made in Parliament on Thursday and asserted,

“Although my original intention was to make sure no confusion arises over the label, my speech was misunderstood. Therefore, to parties who took offence to the remark, I apologise,”

Rusnah’s comments in the Dewan Rakyat was amongst much commentary and criticisms of the Malaysian-made TIMAH whiskey brand with many politicians and conservatives claiming that it either confuses or insults Malays and Muslims in the country. The Tangga Batu MP on Thursday chipped in during a debate on amendments to the Trade Descriptions Act to comment regarding the whiskey brand in the Dewan Rakyat,

“Can’t Timah be given a different brand name? The mines or something? It is not good for women, because Timah is imagined as a Malay woman, kak Timah, mak Timah, makcik Timah, so when we drink the whiskey, it is as though we are drinking a Malay woman,”

During the debate last Thursday, Domestic Trade and Consumer Affairs (KPDNHEP) Minister Alexander Nanta Linggi clarified that the company behind the whiskey has agreed to consider making a name and logo change following an inter-ministerial meeting.

Also read: MP Says Since TIMAH Is A Common Malay Name, Drinking The Whiskey Is Like “Drinking Malay Women” 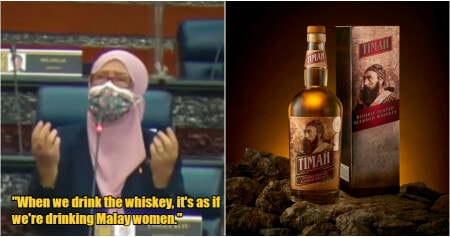