Long weekends are hard to come by, but when it does come, we’d often exploit it kaw kaw by making it even longer by strategically applying annual leaves… But no one does a better job than this man.

According to Oriental Daily, a salesman named Wu, from Zhejiang, China became incredibly famous when he stunned the internet with his masterplan of getting nearly one month off. We’re listening!

Since October 1st is the national day of China, all workers are entitled one week off according to the law. Wu then utilised his 15 days of annual leaves on the working days of second, third and fourth week. Liddat also can?

Together with the national day holidays, he got four weeks off in total! In fact, he only needs to work for two days which are on 30 and 31 October. Then it’s payday!

No, he’s not joking. He was even bold enough to submit the application form to his manager for approval! Somebody give him a medal of valor!

Instead of approving the leave, the manager simply wrote ‘滚’, with three exclamation marks. The Chinese word means ‘go away’, but in this context, we think he actually meant ‘fxck off!’. 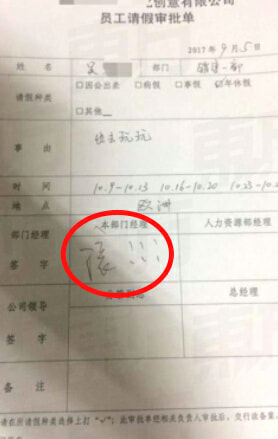 The best part was – Wu couldn’t comprehend the word, probably because the manager simply wrote it due to the burning anger in his chest. So Wu posted his leave form on social media to seek clarification from fellow netizens. We think he may just be playing dumb for the laughs!

As expected, the internet blew up after seeing his form, and some were kind enough to point out the word for Wu. Majority of the netizens reckoned that he had gone too far.

“13 days of leave is border-line acceptable, but 29 days is just too much! You might as well attach your resignation letter with the application form,” a netizen said.

However, there were a few of them applauding Wu for his courage.

“As long as you’re brave enough, every day could be your off-day. Technically you did nothing wrong, as you’re entitled to 15 days of annal leave,” another netizen laughed.

It’s unsure whether Wu got fired from his job or not, we certainly hope not.

What’s your take on this guys? Do you think Wu’s manager should approve his leave? 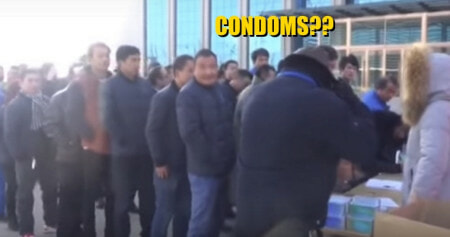