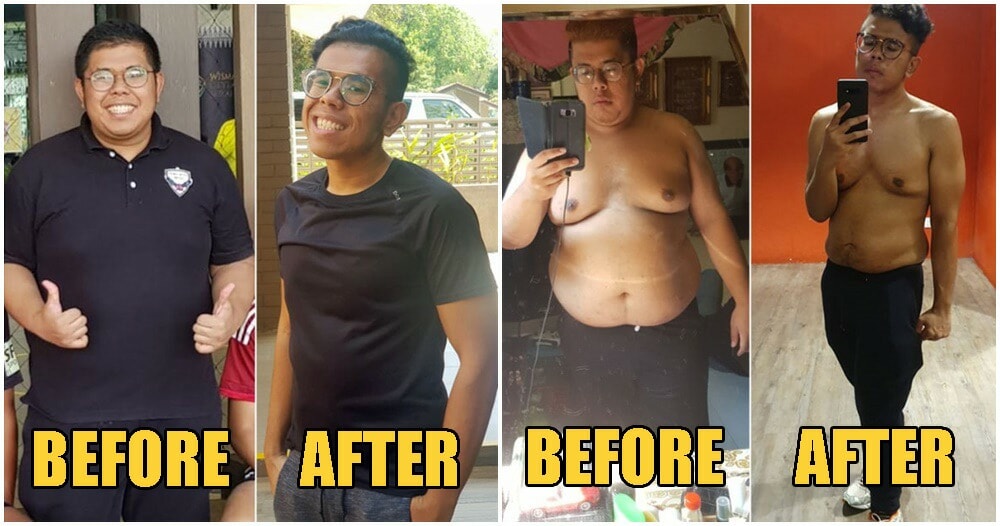 While many of us would ideally wish to shed some weight and adopt a healthier lifestyle, only a select few possess the dedication and discipline to put those words into action.

22-year-old Singaporean, Muhammad Shah bin Dewanan definitely falls under the second category, as his emotional weight loss journey has brought him down from an alarming 116kg to a healthy 75kg.

That’s a staggering loss of 41kg which is equal to losing one-third of himself in about 200 days! The inspiring role model shared with WORLD OF BUZZ how he started AND followed through with this emotional weight loss journey. 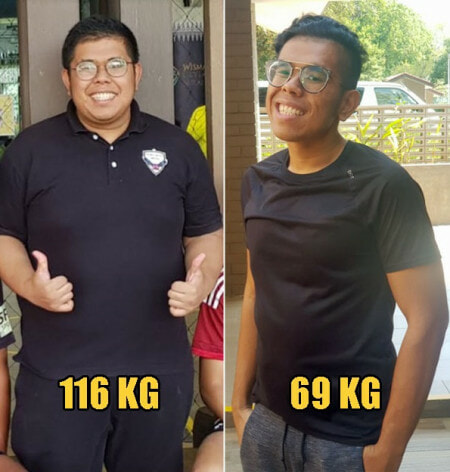 While soft-spoken in person, Shah was very open about his weight loss process, which he frequently documented on social media as a form of record-keeping so he could keep track of all the changes that were happening in his body.

Just as how his fitness junkie friends inspired him to become a health fanatic, he has also inspired others to start their own weight loss journey too!

“Some of my friends and family even said that they have not seen a person like me who is so determined to achieve his weight loss goals before.”

“There are even some people who are eager to start losing weight after they saw my transformation.”

It’s all about the diet and exercise!

Shah shared that it was difficult, but a little will power can get you a long way. How to diet lah in Malaysia?!

The determined youngster said he mainly stuck to a protein-rich diet with fewer carbs and fat for his daily three meals. Here’s what his daily food intake looks like: 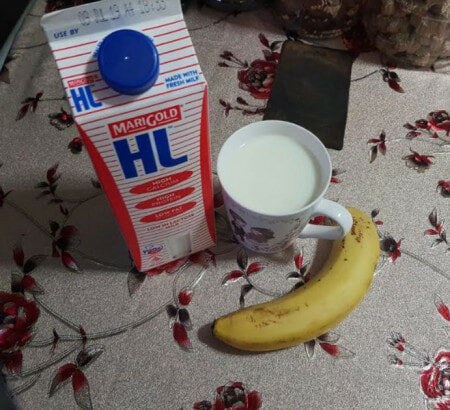 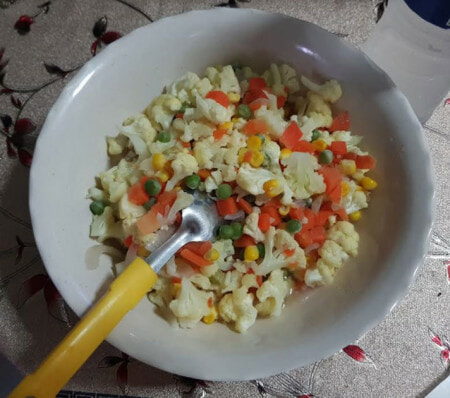 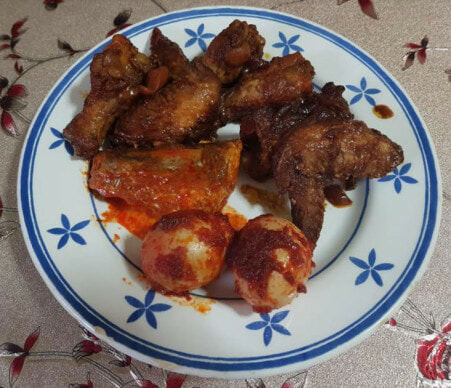 According to Shah, a key thing to avoid was sugary drinks. While he used to indulge in six to seven bottles of sugary drinks a day, the now health-conscious young man said that:

“Remarkably for this whole seven-month journey, I did not even drink a sip of sugary drink. All the while I would drink water and fresh milk, which is for muscle recovery after I’ve hit the gym.”

The only time he would eat what he wanted was on his weekly “cheat day” where he let himself satisfy his cravings as this temporary indulgence actually allowed his metabolism to stay high.

As for his workout regime, Shah was committed to a fixed schedule of aerobics and cardio exercises three times a week. On the three days, he would hit the gym for around three to four hours for weight workouts. 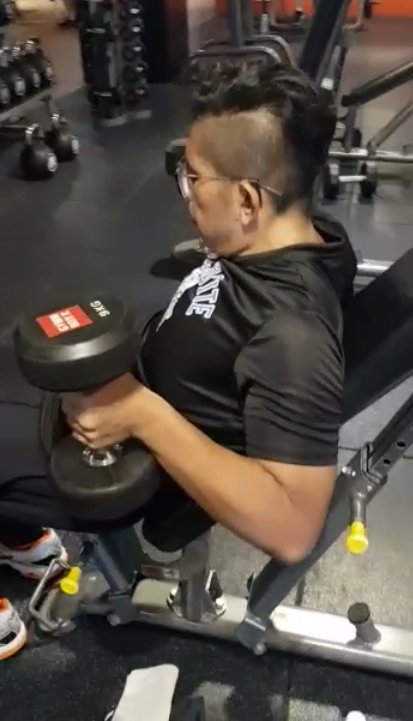 Sometimes he would even work out TWICE a day, only allowing himself one rest day a week. Shah pushed his determination beyond limits and even worked out all through the Ramadan month in 2019! Yes, that means exercising during fasting month!

“I did not feel tired or hungry. I felt the thirst but I was able to overcome it. I just felt I could go on and all I could think of was feeling determined and wanting to finish my exercises. There was no pain and no tiredness.”

However, the intensity of his workouts proved to have some consequences on Shah’s physical condition as this caused him to suffer a tear in his anterior cruciate ligament (ACL). However, he has been given a clean bill of health by doctors to continue training.

Nonetheless, not all of those consequences were bad. With this intensive routine, Shah was able to shed 39kg just six months into his weight loss journey! He continued to lose another 2kg in the next month to reach 75kg.

After the seven-month mark, Shah’s goal to hit below 70kg was reached. 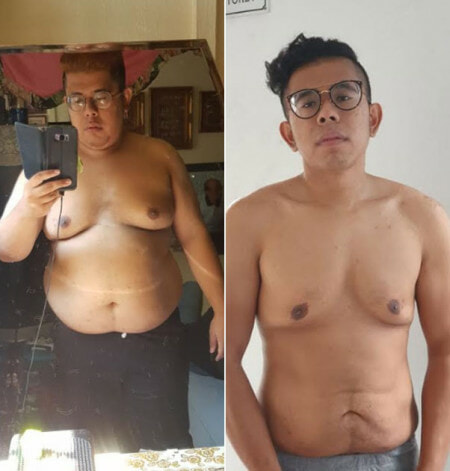 Binge-eating as a coping mechanism

While Shah’s story is inspiring to us all, it isn’t your average weight loss journey. In fact, Shah said that his BIGGEST motivation in losing all that weight wasn’t actually so much for his physical health but rather his mental health. Shah had been dealing with depression in his childhood through uncontrolled binge-eating that led to his obesity. 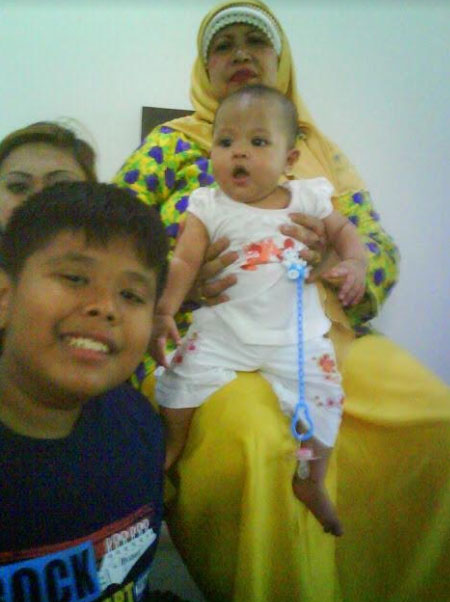 “My whole life went down the drain after my parents divorced when I was 10 years old, which was 12 years ago. A year after the divorce, my distress doubled as one of my beloved grandmothers passed away. It was a huge blow to me.”

“All the happiness and joy that I’ve tasted ever since I was born, where family is everything in your life, vanished just like that.”

To cope with his growing depression and suicidal tendencies, Shah turned to food as a source of comfort and eating became a way for him to let go of bad memories.

His binge was referred to as “a regular habit” whereby he would eat up to two to three plates of rice to “over-satisfy” his tummy. He would also drink around six to seven bottles of sugary drinks a day! Despite recognising the growing issue of his weight, Shah said he could not stop. 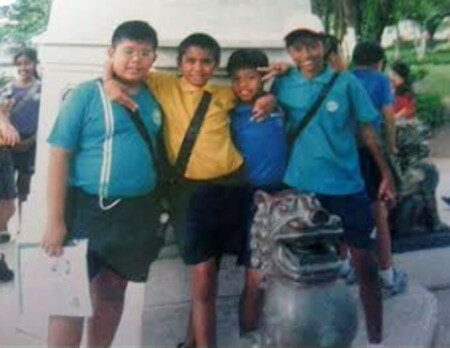 However, when he hit 108kg, he made up his mind to start losing weight to overcome his depression. Unfortunately, this attempt proved to be futile as Shah reportedly “always lost to his cravings”.

What truly helped him during this process was religion. “The Quran changed me. One of the verses that I’ve learnt and understood is that God tests those he loves with hardship, fear and loss of wealth & lives.”

It wasn’t until he hit an all-time low in 2018 at the staggering weight of 116kg that he truly tried to make a difference in his life.

And look how this time turned out! Shah said the game-changer here was coming up with a plan and sticking to it so he can fulfill his weight loss goals. His current fitness goal is to keep the weight off and get a six-pack!

Advice for people starting out

For those of you who need the motivation to start on your own fitness journeys, Shah has a few words of advice.

“Keep showing up, even if no one believes in you. Results won’t come if you quit. Also, dare yourself! If you have dreams, don’t just sit there, get yourself up and make something happen.

“Lastly, treat pain as your teacher. When some of us has been knocked out by life, we have to hit it back. Use the pain, do something with it, allow it to take you to the next level. At the end of it, it will be worth it.”

Congratulations on meeting your goal, Shah! We hope this inspires the rest of you to end the year in pursuit of a healthier, fitter lifestyle. 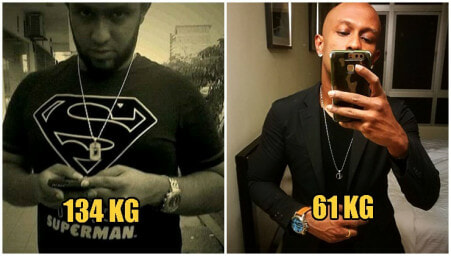