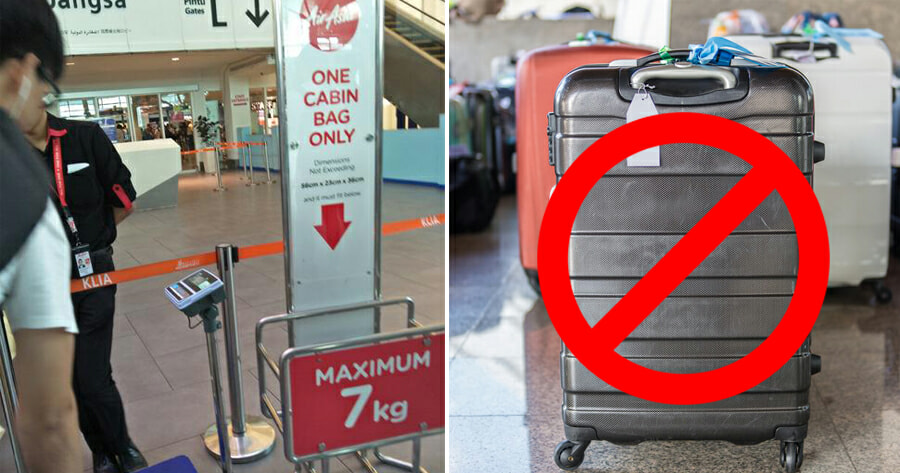 UPDATE: AirAsia has updated their cabin baggage policy as of 7 July 2020, where passengers will be allowed two (2) pieces of cabin baggage (cabin bag and laptop/small bag) not exceeding a total of 7kg in weight.

Find out the specific requirements for each bag here.

Now, that interstate travel is allowed, AirAsia has implemented new baggage policies during the Recovery Movement Control Order. On the AirAsia website, it states that the new cabin baggage policy is “to ensure social distancing between guests during embarkation and disembarkation.”

Passengers are allowed to carry on board ONLY ONE piece of cabin baggage which can be either one (1) laptop bag, one (1) handbag or one (1) small bag.

If your cabin baggage is unable to fit under the seat in front of you:

However, it seems like a number of customers aren’t aware of this new policy, resulting in major inconveniences at the airport. In one incident, a customer wasn’t allowed to board her flight as she was carrying a small suitcase.

According to Sin Chew Daily, a woman from Sabah had booked a flight to Kota Bharu and was carrying a small suitcase which she intended to bring into the cabin.

At the boarding gate, she was denied from entering the plane as AirAsia’s new policy states that suitcases are not allowed into the plane cabin. She added that many other passengers in line were also unaware of the new policy and had to miss their flight.

Some people* are still not aware of this new Air Asia RMCO rule .. Big bags need to be checked in.. only ONE small…

If you’re planning on travelling by AirAsia anytime soon, remember to check their website on any new policies they might have. These new rules might be inconvenient but they are only there to ensure that passengers are safe while travelling.

Also read: Cancelling Travel Plans This 2020? Here’s How To Get A Refund From AirAsia, Airbnb, And More