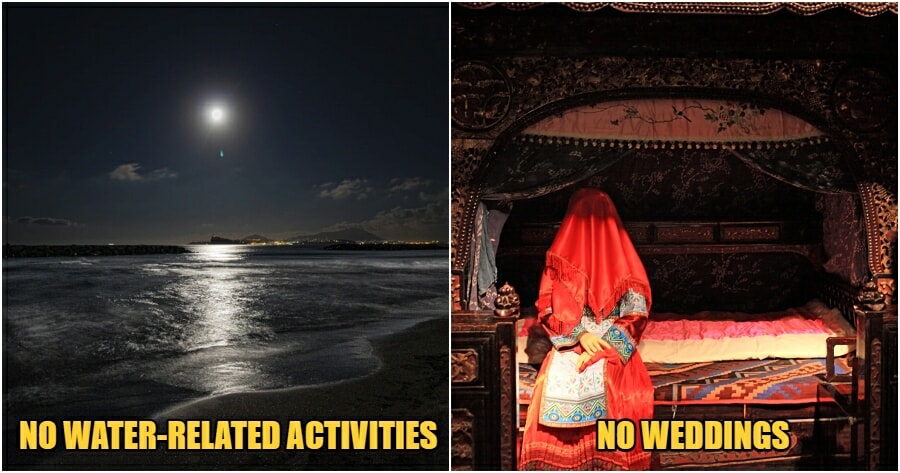 As the annual Hungry Ghost Month commenced sometime last week, some people have started to take precautions in order not to encounter the ‘good buddies’, or in more direct terms, the spirits and ghosts. The elderlies, especially, tend to be adamant when it comes to the pantang larang and taboos during the Hungry Ghost Festival when the gates of hell are opened, and often remind their child to return home as early as possible.

This is because the spirits are believed to be wandering around after the sun sets, looking to taunt their victims, especially the ones who happily ‘violate’ the taboos. Now, if you’re not looking for trouble with the ‘buddies’ (好兄弟) from the spiritual realm, here’s what you should know.

According to AirAsia, water-related activities are best to be avoided during the Hungry Ghost Festival which usually lasts two weeks. It is believed that vengeful spirits who met their demise in the water patiently wait there for victims, who can be a replacement or a ‘substitute’ to take their place. 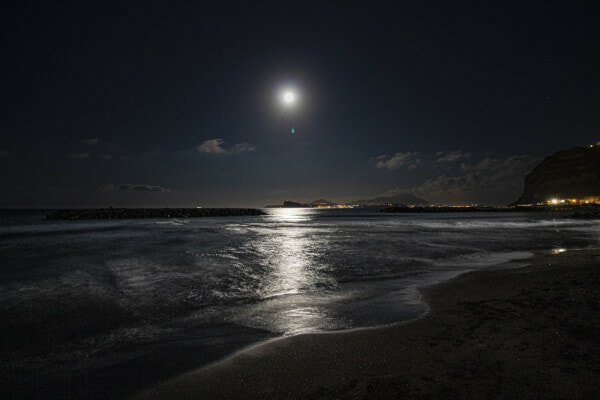 When a substitute has taken their place, it is then the time for the spirits who died in the water to reincarnate. If you have plans to visit the pool and the beach, especially at night, perhaps re-schedule your plans to avoid unwanted consequences.

Fashions that come in red and black are undeniably good to look at, most of the time. However, if you have plans to dress in red or black during this period, you might want to hold off your plan for a bit. 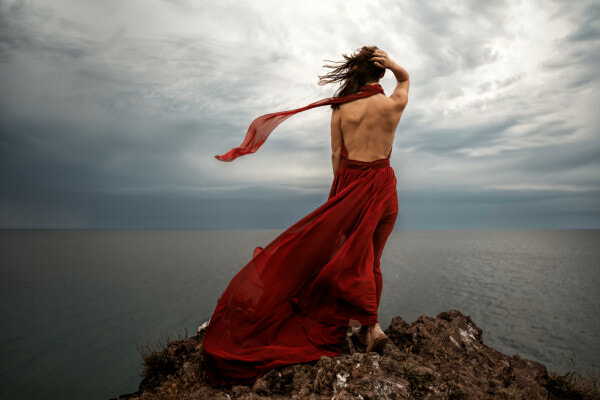 You may garner unwanted attention from wandering spirits, as they are said to be especially attracted to these two colours. Additionally, spirits who died in red clothing are also believed to be the most ferocious spirits of all.

Living in an era where social media dominates a huge part of our lives, it is common and understandable for some people, especially the youth, to always be ready with their cameras and capture the bits of life to be shared on social media. If you’ve watched the Thai horror film Shutter, you’ll likely know where we are headed with this! 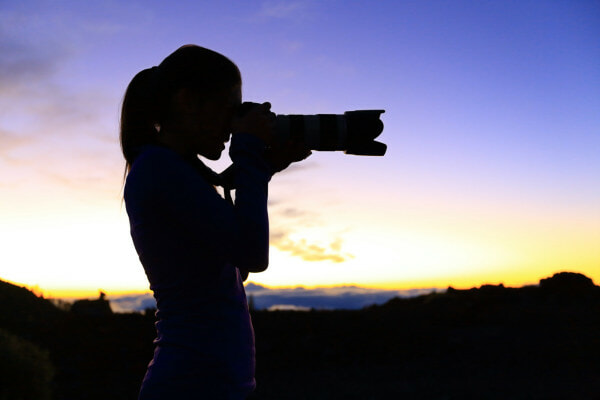 Camera and photography enthusiasts, you might want to give your lens ‘a rest’ during the night. During the Hungry Ghost Festival, you risk capturing ‘something else’ at night, be it indoors or outdoors. In worst-case scenarios, some spirits may be trapped in the camera or the phone during the photography process. And since our phones are mostly with us, we can’t imagine having the spirits with us ALL THE TIME. Yikes!

It might also be wise to stop taking selfies for the time being unless you don’t mind having an uninvited ‘someone’ by your side.

After years of dating each other, lovebirds will expectedly take their relationship to the next level and get married to each other. If your scheduled wedding happens to clash with one of the days of the Hungry Ghost Festival, perhaps one should reschedule to ‘ease’ things between each other? 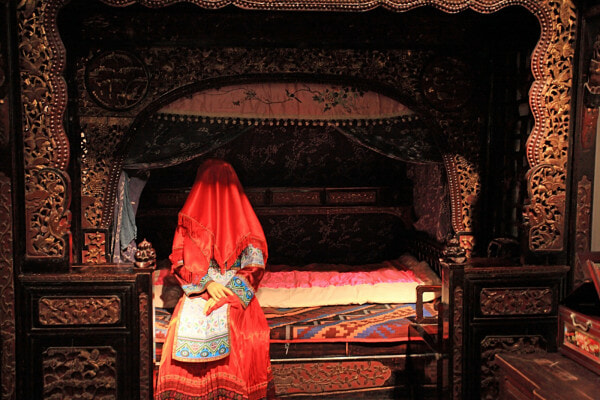 It’s considered inauspicious for couples to tie the knot during this period, as it is believed that these marriages will not last long. Not only that, if you insist on your wedding going on, uninvited ‘guests’ are likely to crash the party!

Happily ever after? During this period, we’ll say: unlikely!

For some, it is a habit to whistle and hum a song, regardless of the time. 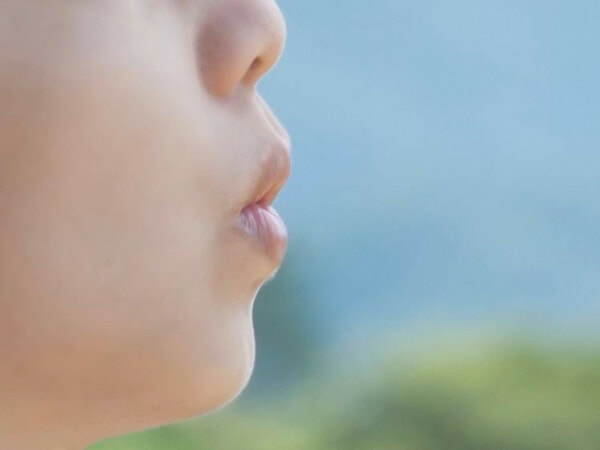 If this happens to be a die-hard habit of yours, try to put this habit away for the time being. Whistling is said to attract roaming ghosts, who are just waiting for someone to point them in the direction of a spooky encounter. In the meantime, your whistle is widely believed to be interrupting the peace of the night, and for that, you must pay a ‘penalty’.

So we suggest NOT to whistle when darkness falls. Boredom kills, but no one wants an encounter with them, right?

Makeshift stages and tents would be set up for Chinese opera performances and getais (concert-like stage shows), held side-by-side with prayer altars, to ‘entertain’ the wandering ghosts and spirits. And for that, the front row seats are always, we repeat, always reserved for the guests from the other world, as reported by Tatler Asia. 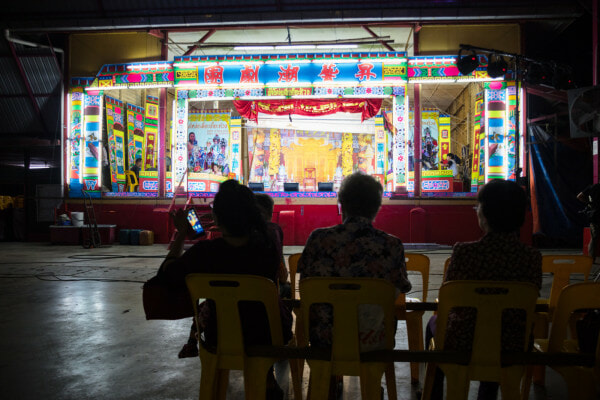 And for that, the seats will purposefully be left vacant! However, it doesn’t mean you can’t sit down and enjoy the show. If you’re still curious about the performance, simply leave the front row seats empty.

There are more taboos that you should not be violating during the Hungry Ghost Festival, but we’ve only listed down the most common ones which may be relatable to our daily lives. To some, it may be superstitious, and to others, it is simply a form of respect and of taking safety precautions.

If you know of any other taboos that we shouldn’t be doing during the festival, do share with us! 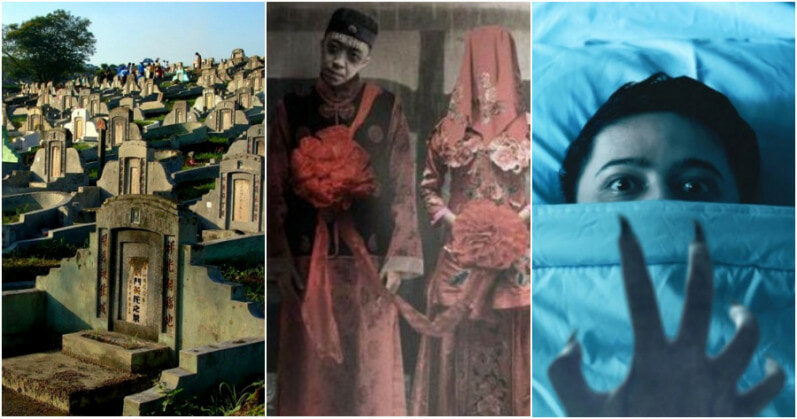